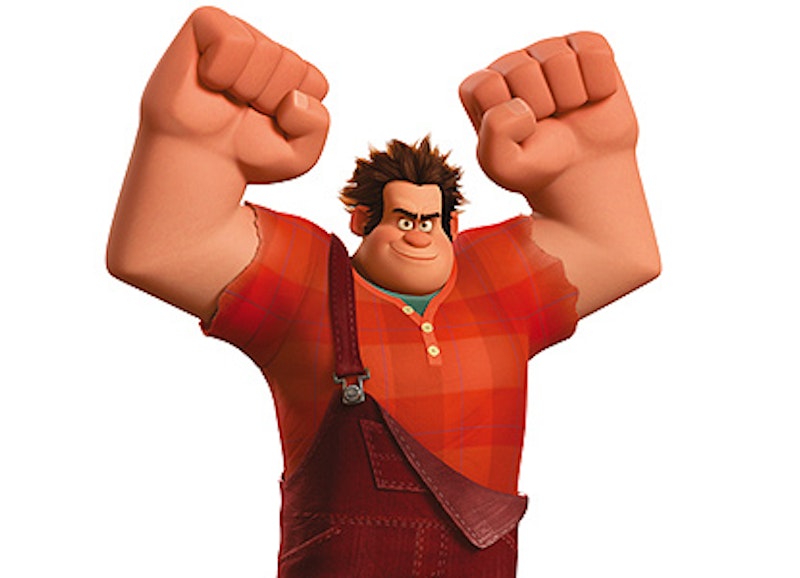 The Academy Awards are approaching, and with them come wild speculations across the nation as to who will win what and why. Take a drink every time one of your friends says the phrase “best supporting actor” and I guarantee you'll get alcohol poisoning within the hour.

But let's be honest: we all love Oscars season. Who doesn't like gabbing about films we've seen half of and watching awards shows populated by actors we vaguely like? It's a vital part of being a proper movie-going American! And so it was that I sat down to watch everything nominated for this year's Best Animated Feature, because I am a huge geek, but a damned patriotic one.

I started with Brave, which was probably my favorite pick going in. Building on the rich, classic tradition of Scottish folk tales, Brave is Pixar's first female-centric feature presentation, starring the archery-prone Merida (Kelly Macdonald) who rebels against her mother's (read: the Queen's) wishes and accidentally transforms her into a bear. (Let's be real: we've all been there.) Despite a wonderfully empowering and pro-family message, plus a huge surplus of cute black bears and a faithful adaptation of its source material, Brave is simply too straightforward in its presentation to win the award. It's a Disney film that feels exactly like a lot of other princess movies we've seen before, and while Brave is technically marvelous, I can't see the Academy swooning over it.

I moved on to ParaNorman. I’d heard quite a bit about this movie online, and it's no wonder—everyone on the Internet is buzzing about its anti-bullying themes, which may well provide it with the best reason to win an Oscar. 2012 was the year America woke up and found out its kids were getting pushed around at school, and didn't much care for that—and ParaNorman is the flick that's convinced it can solve it all. Set against the backdrop of a zombie apocalypse brought on by a Salem-esque witch persecution, we follow Norman (whinily portrayed by Kodi Smit-McPhee) as he is bullied by Christopher Mintz-Plasse, ironically to anyone who's seen Superbad, into saving his town from a curse with the help of John Goodman, Casey Affleck, and the power of friendship—an unlikely trio to be sure. It's exquisitely designed, and features a remarkably well-executed revelation in the end that one of the characters is gay. Being socially conscious is a surefire way to attract the Academy's attention—look at Milk—and ParaNorman takes full advantage of that fact.

Despite its timely message and vivid animation, however, ParaNorman will inevitably be compared to the other pseudo-horror animation of the year—Frankenweenie—and comparatively, it comes up short. Frankenweenie is director Tim Burton's update of his own 1984 live-action film featuring a boy and his electrically-reanimated dead dog, and as someone who was forced to watch that low-budget Disney creeper flick by his father as a child, it could not have been better. It feels as though this version was the one Burton meant to make in the first place. Where ParaNorman simply parodies zombie tropes, Frankenweenie takes the piss out of every classic movie monster around, from the Creature from the Black Lagoon to Godzilla, never once losing sight of the plot or its major themes of love and a healthy respect for Science. This isn't to say ParaNorman isn't wonderful, just that its themes, animation, and everything else right down to its baggy-eyed protagonist will inevitably be compared to Frankenweenie's.

Next up was The Pirates! Band of Misfits, the newest stop-motion offering from Wallace and Gromit creator Nick Park. I'm not sure why I wasn't looking forward to this, but it was probably the title, which was changed from the more fitting UK version The Pirates! In an Adventure with Scientists! Whatever the reason, I was entirely wrong—Pirates is hysterical. The Pirate Captain and his nameless crew are out to win the coveted Pirate of the Year Award, but a run-in with Charles Darwin changes everything, and I never expected to type that sentence in my life. Maybe it's the rum—grog?—talking, but when Hugh Grant and Martin Freeman get together to play buccaneers while The Clash's “London Calling” plays over their traveling montage, I start cheering. But despite some excellent voice work and what is without question the best animation in the pack, I just can't see the Academy going for Pirates either, if only because its subject matter is too lighthearted and doesn't really take any risks in terms of storytelling. But it'll always hold a special place in my heart as “the movie where David Tennant played Charles Darwin and nobody noticed the pirate who's secretly a woman,” because both of those things are amazing.

I'd saved Wreck-It Ralph for last, because I hoped it would also be the best. Boy, was I right. Ralph, a video game villain, goes on a classic redemption quest that results in a delightful romp through 30 years of gaming history. It's not just for nerds, but if you don't know an FPS from an RPG, take a geeky friend with you to your next movie night to accentuate the experience. With a star-studded cast including John C. Reilly, Sarah Silverman, Alan Tudyk, and Jack McBrayer, Wreck-It Ralph is a powerful contender to ultimately win Best Animated Feature, and it all boils down to one thing: this isn't a movie that could exist in any other medium. Without computer animation, it would never even have been greenlit. While the other four could easily have been adapted in some way to live action, the humor and essence of Wreck-It Ralph requires animation, with intentional glitching, calling attention to smooth versus clipped motion, and much more. It's not just a fantastic movie, it's a fantastic movie that exists in a state of perfect unity with its medium, and that's the sort of thing this category needs to honor.

It's strangely appropriate that none of these films were nominated for any other Oscars, since all of them have to do with not fitting in or rejecting norms in some way. Pirates and Wreck-It Ralph both have a rejection of shiny trophies or medals worked into their scripts. The creators of these films may be able to take solace in their own morals, but it's nevertheless a somewhat surprising snub from the Academy, which has recently showered nominations on such films as Toy Story 3 and Wall-E. I find it hard to believe that neither Danny Elfman's delicately terrifying orchestration of Frankenweenie nor Brave's beautiful adaption of traditional Scottish music deserve so much as a nod.

Ultimately, from what I've seen, Wreck-It Ralph stands the best chance of coming out on top. Its mix of humor and pathos hits all the right notes for the notoriously sentimental Academy. Frankenweenie certainly gives as good as it gets, though, and remains a very close second, with Brave an unlikely but still plausible third choice. But the real winner on Sunday night will be Walt Disney Animation, owning three of the five nominated properties. Whoever wins, it'll be a great night for corporate media, and isn't that what we gather to celebrate in the first place?