The Not-So-Wonderful Wizard of Oz

A marvel in movie mediocrity. 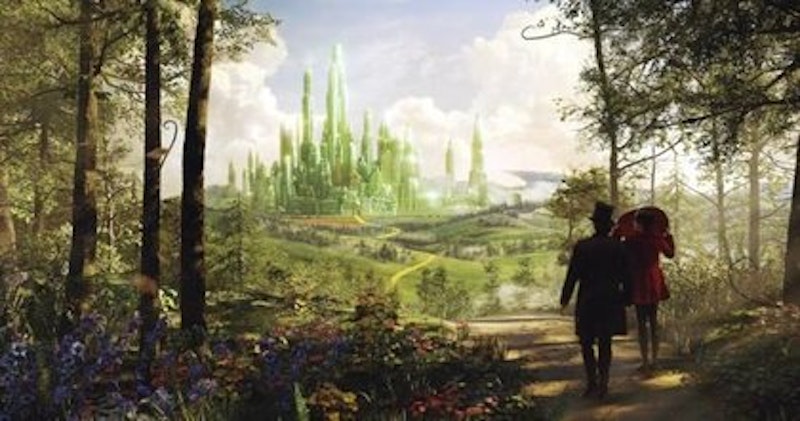 I really wanted to like Disney’s new Oz: The Great and Powerful, which opened last Friday. Very few good family movies come out nowadays, and the previews looked exciting. I ignored numerous review headlines last week that looked positively horrible, and I avoided reading the stories in order not to cloud my judgment. Besides, I thought, I have terrible taste in movies so I will probably love it even though all the actual movie critics hated it.

Well, I didn’t hate it hate it, but I agree with NPR that it’s really neither great nor powerful.

I liked the opening sequence showing the Oscar Diggs (nickname: Oz, played by James Franco) backstory. He’s a smoke-and-mirrors carnival magician. Like a certain other Toto-bearing resident of the state who shall remain nameless in the film, he’s swept from black and white Kansas to extremely colorful, artistically cool Oz (a land that shares his name! what a coincidence!) in a tornado.

Franco is one-dimensional as Oz, bringing too much toothy grin and not enough humor and depth to what could’ve been a really neat character had it been better written.

My main beef with the film is the script. If you’re going to flying-monkey around with the well-respected works of Frank Baum, and you’re Disney, for love of Tinkerbell, get yourself a crack team of scriptwriters to knock a fantastic plot out of the park.

The story in a nutshell is this (spoiler alert!): Oz lands in Oz, makes out with all the witches, pisses off the Wicked Witch of the West, fights her, and then gives stuff out at the end.

Disney pretends the books and massively popular musical Wicked have never happened, which is a shame because a nod or two in their direction may have helped. Kids who know the Wicked storyline may be confused because the Wicked Witch of the West really shouldn’t be making out with Oz, who is, um, her dad.

Michelle Williams is pretty boring as Glinda the Good Witch. Mila Kunis is just okay as the Wicked Witch of the West. She’s actually turned green by the poison apple (Disney goes to the Snow White well for some reason) fed to her by her pre-house-flattened sister, played in a slightly-above-mediocre fashion by Rachel Weisz. Zach Braff from Scrubs plays the good flying monkey who talks. Someone else plays a whiny china doll, and there’s a whole Alice in Wonderland teapot village that’s crushed and begging for a David Bowie song. It’s all very strange.

My highest hope for the film came when I saw the Danny Elfman (Nightmare Before Christmas, Simpsons, Corpse Bride, Batman, random other Tim Burton stuff) music credit in the beginning, and the orchestral music was fantastic, but this unfortunately wasn’t a musical (another thing that may have made it better); there’s only one half-baked munchkin song. Bummer.

It’s not a total disaster of a movie. It’s just hindered by its mediocrity. I agree with CNN that it’s kind of decent at times, even though it was probably just made so there could be a new ride at Disneyland. There are fireworks over the castle, and probably a subliminal “come to Disneyworld” message in the clouds.

It’s an oddly PG film. Your kids really need to be a certain age to appreciate it. My teens sort of rolled their eyes while my nine-year-old (“I loved the cool setting”) and seven-year-old (“I liked it but I didn’t really know what was going on”) kids basically enjoyed it. It’s scary. There is a lot of violence, graphic witch transformations and battle scenes. It is definitely not a film for kids under age five.

For kids over five, it’s mostly a reasonable excuse for popcorn, candy and soda.