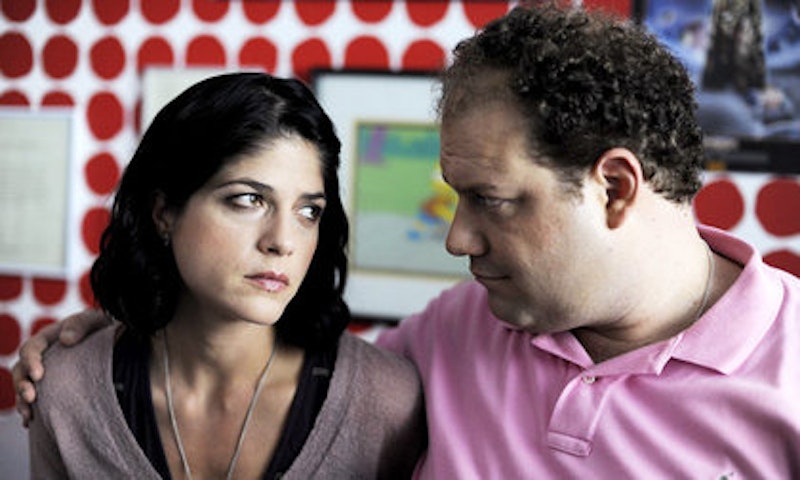 My working sub-hed for a Dark Horse review changes three times while I was watching the film. For the first 40 minutes, it was "Why did Todd Solondz even make this movie?" For the next 15-20 minutes after that, it was more along the lines of "Todd Solondz enjoys Salvador Dali exhibitions in his spare time." After I'd made it all the way through—which didn't take long, since Dark Horse runs for 80 minutes—it was more like "Damn."

Dark Horse centers on an unlovable, oblivious schlub named Abe (Jordan Gelber), who's sort of the poster child for early 21st century underemployment: works for his dad without doing any actual work, lives at home, rolls a Hummer, flaunts a wardrobe of horrible hipster t-shirts, explodes into tantrums at the slightest provocation, 35 and going to seed.

This is familiar enough territory for Solondz's fans: Abe is yet another of the writer/director's slowly widening gallery of New Jersey grotesques. So squarely does the film establish his no-hope bona fides at the outset that the audience slips into a sort of cruise control 10 to 20 minutes in, duly anticipating the warm-bile waves of humiliation designed to leave us confused as to whether to laugh at or sympathize with the protagonist: we know where this one is going.

And, yes, humiliations abound: Abe's interactions with his parents—played with rheumy exhaustion by Mia Farrow and Christopher Walken—are stilted and uncomfortable. He lucks into girlfriend Miranda (Selma Blair working in neurotic basket case mode) via good luck, optimism, and sheer cluelessness. Marie, the age-inappropriate secretary at the office (Donna Murphy) appears to be his only friend in the world. Meanwhile, dude dresses down Toys 'R' Us employees over peanuts, subsists on a diet of cut-rate teen pop, and can't get over the fact that he didn't get to compete on American Idol. He's bracing with his parents, honest with Marie, and almost psychotically optimistic with Miranda.

The overall cast is almost hermetically small—it seems like Solondz's smallest cast ever, somehow—and feels strangely cut off from the rest of the world, or at least the rest of New Jersey. The prototypical barbs are slow to arrive, and they're hardly as cruel and pointed as one would expect.

Because the assumption is that things can only get more fucked up from here—and, maybe, that Solondz is losing his edge—the natural impulse is to start tuning the movie out at about the point where Abe shows up at Miranda's house for a date she forgot all about. That would be a mistake, because this is the point where Dark Horse leaps off of a cliff and into the bizarre.

It's easy to forget that Solondz has been wandering a surrealist, existentialist wilderness: 2004's Palindromes positing multiple, improbable performers as stand-ins for a pregnant teenage girl and 2009's Life During Wartime acting as a sequel of sorts to 1998's Happiness, only with different actors and actresses. As early as 2001's Storytelling, he was parsing the validity of the personal narrative. Many have argued that Dark Horse pursues a straight narrative that slowly and insidiously goes to pieces, but to watch it more than once is to conclude that the omniscient narrator and the protagonist are thoroughly unreliable, and to realize that Solondz is essentially showing off his seams, letting us in on the artificiality of cinema generally, and utilizing misdirection to demonstrate emotional manipulation to his audience while manipulating us emotionally.

The thing is that it works. Many of the harshest bits of dialogue manifest late in the game, in bone-dry, character-learning-a-lesson scenes that are abject hallucinations. And yet they work because Solondz up-ends his tendency to scatter withering quip grenades throughout (1995's Welcome to the Dollhouse reveled in this), instead condensing them for maximum effect and, at times, denting the fourth wall by straying into psycho babbling lunacy (see the second Toys 'R' Us scene, by which point if you're not aware that you're no longer in Kansas, there's no hope for you). It even works despite the plot remixes and interpolations at play as Dark Horse stumbles into what might be a climax, or the crest of a fever dream, or a cosmic hiccup—even when, for a charged moment, the film coughs up a contrivance that the previous cinematic evidence never quite provided for.

Dark Horse concludes with three scenes that may or may not be connected to one another; they are as divorced from the drolly kinetic, proto-Solondz scene that opens the movie—where wedding attendees dance gracefully and sumptuously in a modern way, as Abe and Miranda watch—as possible. In the first, Abe drifts into his parents' home and he stares at the camera before finding his room and discovering something his father wrote on the door frame years before. In the second, Abe and Marie dance, slowly and with a poignant intimacy, around an unfamiliar living room. In the third, Marie is back at the office, it's a typical work day, and she is emerging from a daydream that may or may have not been the second scene; she looks straight ahead for a long moment before the film ends, a quietly intense, unmoored shot that will haunt you whether or not you ultimately think that it deserves to.