The political process is rigged, The Candidate says. 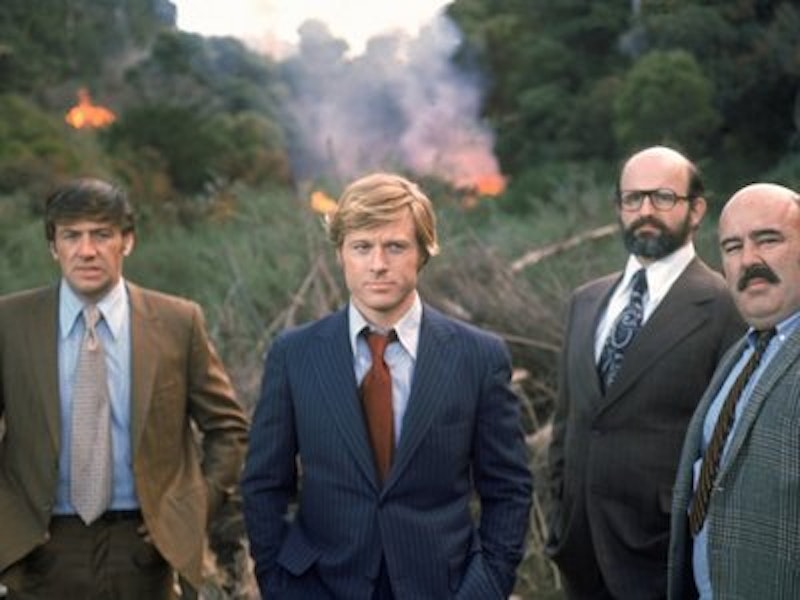 (This is the eighth post in a series on political films. The seventh, on The President's Analyst, is here.)

The Candidate (1972) is, intentionally, a period piece. But what dates the film most startlingly isn't the sideburns or the winking allusions to Nixon and Kennedy. It's abortion.

The film features Robert Redford as Bill McKay, a young California lawyer running on the Democratic ticket for Senate against an undefeatable Republican incumbent, Crocker Jarmon (Don Porter). McKay is idealistic—and one of the things he's forthright about is abortion rights. Initially, his campaign manager Marvin (an aggressively bearded Peter Boyle) tells McKay that since he's going to lose, he can say anything. But as the campaign goes on, Marvin pushes McKay to be more mealy-mouthed. In the case of abortion, this means that the candidate can no longer just say, "I'm for it." Instead he must say, "We need to do more research."

So does this mean that the hippies won and we're living in a left utopia? Not exactly. There are other issues from 1972 that McKay champions, like busing, where the left completely capitulated. And balancing business interests and environmental effects, where the Democrats often try to find moderate middle ground in much the way that McKay does.

Part of the difference between our reality and The Candidate is that the Democratic party has moved left over the last 35 years, just as (though not as far as) the Republicans have moved right. But the slippage also underlines a flaw in The Candidate's understanding of politics. Candidates are definitely pushed to take positions, regardless of their personal interests or predilections. But those positions aren't necessarily determined by waffling centrism. They're determined by the public, the party, and interest groups.

You do get a little of this in The Candidate; Marvin, the campaign manager, is concerned that unions will be turned off by McKay's support for environmental controls. And yet, when McKay actually meets with a union leader, he’s deliberately and gratuitously insulting. He shows up late, baits the guy for opposing a farm workers union, and then tells him, "We don't have shit in common." The guy endorses him anyway; McKay, for reasons that are never explained, has all the power in the relationship.

The contemptuous dismissal of the union boss towards the end of the movie seems like it's out of line with the film's overarching narrative of McKay’s increasing spinelessness. But in fact, McKay never propitiates particular leaders or interest groups. He's not portrayed as a transactional politician; he doesn’t meet with, say, African-American leaders or groups and promise them specific reforms. Instead, he walks through a black neighborhood for a photo-op, selling himself like "underarm deodorant" as one political commenter puts it. McKay compromises not by negotiating for the financial and electoral support of specific voters, but by becoming a product. McKay only balances two competing perspectives: lefty authenticity and mainstream blandness.

The film is, in a lot of ways, more about Marvin and his machinations than McKay and his victory. It's Marvin who chooses McKay to run; it's Marvin who shapes McKay's message; and it's Marvin, not McKay, who’s the real winner. In the famous last scene of the film, after McKay's stunning upset victory, the hapless candidate asks Marvin, "What do we do now?" This is obviously meant first of all as a commentary on the emptiness of the political process, and the extent to which McKay, in becoming a politician, has lost the core leftist commitments. But it's also a blatant acknowledgement that it’s Marvin, personally, who has replaced those core commitments. Cheering, ecstatic constituents—especially women—turn to McKay for leadership. McKay turns to Marvin.

Marvin as svengali is more than a bit meta: director Michael Ritchie worked on the campaign of Senator John V. Tunney. Marvin’s is a stand-in for Ritchie, and both Marvin and Ritchie are in the business of telling Redford/McKay where to stand and how to sell himself to the cheering throngs/audience. The film can be seen not just as a commentary on politics, but also as a commentary on film, and the link between Hollywood and political theater. The movie comments repeatedly on McKay's good looks; politicians, like movie stars, are packaged celebrities. The Candidate is a Redford star vehicle and a McKay one, simultaneously.

If Marvin is the director, though, he's also the Boss. Political films love the figure of the corrupt, unelected political manipulator—the urban gangster with politicians in his pocket. The character pops up in Mr. Smith Goes to Washington, The Great McGinty and many other films.

The urban bosses are gone, but in their place, The Candidate creates the campaign manager. Marvin is less vicious, and less ruthless than his kingpin predecessors. But he inherits their cynicism, competence, and control. The politicians are always a front—an artificial product, like deodorant.

That’s how democracy is supposed to work. Politicians are supposed to be responsive to the public, and to pressure from motivated groups. If you stake out broadly unpopular positions, such as building a wall across the Mexican border, you’re likely to end up unpopular, and losing your election. At the same time, motivated pressure groups can have an outsize influence on parties and candidates. The NRA has, through lots of money and effort, made gun rights central to Republican identity. On the other hand, decades of activism, legal and political, have made it virtually impossible for Democrats to be pro-life and run for national political office.

The Candidate's cynicism, like most Hollywood political films, ends up both reassuring its viewers of their intelligence and letting them off the hook. The political process is rigged, the film says. Watch, laugh and congratulate yourself on being in the know.