On A Scanner Darkly (2006), directed by Richard Linklater. 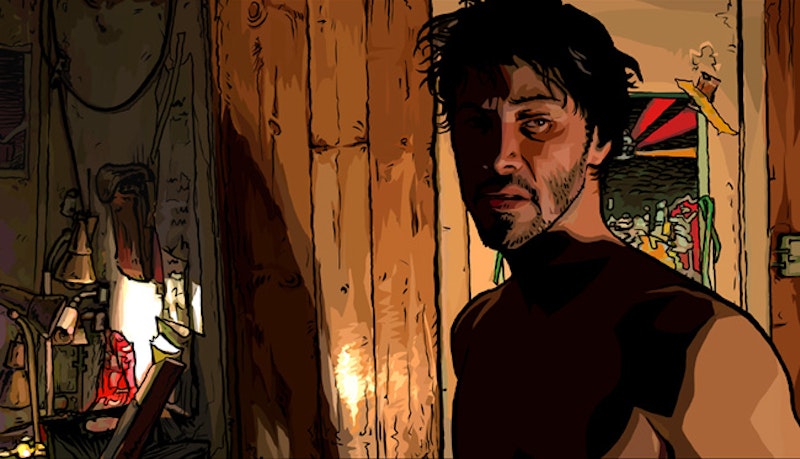 I’ll confess to never climbing about the Philip K. Dick train. As a Washington College student, I discovered an ancient paperback copy of 1978’s VALIS in the O’Neill Literary House, lasted 10 or 20 pages before tapping out. There was something vile and repulsive and off putting around Dick’s ennui; to attempt reading him was to feel increasingly unclean and uneasy, like fondling a Hellraiser puzzle box.

There’s nothing hip in admitting that Dick adaptations like Total Recall, Paycheck, Blade Runner, and Minority Report have contributed to my cinematic diet over the years. With the exception of Paycheck, they’re great movies. More arresting arguably than Paycheck is Richard Linklater’s adaptation of Dick’s 1977 novel A Scanner Darkly.

Set in a near future Anaheim, California, the film centers on Bob Arctor (Keanu Reeves), an undercover police officer who wears a “scramble suit”: a phantasmagoric disguise that projects a constantly shifting series of personas. (His boss dons one, too.) Arctor is investigating the source of a mysterious, pervasive drug called Substance D, which he’s consuming alongside equally fried pals played by Winona Ryder, Rory Cochrane, Woody Harrelson, and Robert Downey, Jr. The apparent locus of the investigation happens to be Arctor—and one of his friends wants to sell him out to the pigs.

“Deadpan” is a descriptor I tend to abuse, but A Scanner Darkly begs for that label; there’s a no-pulse flatness that consumes the film whole, accentuated by the rotoscoping animation that transforms actors and backgrounds into washed-out husks. It’s lethargic, so persuasively boring. Nothing occurring onscreen seems to have any consequence—even when it does—and the viewer shares the camera’s sense of mild nausea.

Downey’s matter-of-fact mania, Ryder’s exhaustion, Cochrane’s fidgeting, Reeves’ fantastic blankness, the low-level paranoia they share in common: all of it seems impossible to latch onto as a viewer. It’s like trying to shake hands with a conference room full of ghosts, or shadow-boxing an unreliable memory. Even that moment, early on, where Linklater offers us a sneak peek at a vast governmental surveillance apparatus feels almost resigned, anticlimactic.

That the world of A Scanner Darkly looks so much like the one we know—what little we see of it—is worth noting. Everything is so blandly pedestrian; everyone shrugs exhaustedly through their strands of plot, the denouement a light at the far end of a tunnel, never nearing. We become these characters, disconnected and adrift.

The most frequent conversational beat occurs when one addict asks another one question: “How much are you taking a day?” The answer is always pained, imprecise, and out of reach. Substance D is erasing awareness, cognition, perspective, self. The cul-de-sac this film drifts into is bucolic, companionable, and profoundly disturbing, catnip to the conspiracy-minded; you may recall, for instance, the Korea segment of David Mitchell’s Cloud Atlas. That a glimmer of hope slices through the gloom doesn’t obviate how adaptable this parable finally is. In the movie, Substance D is revealed to be synthesized from a small blue flower; in the waking reality where we all have to live, “Substance D” could represent any notion, bauble, or mania deployed to distract a population while the very ground it stands on is sold or auctioned away.