On Hell or High Water and War Dogs. 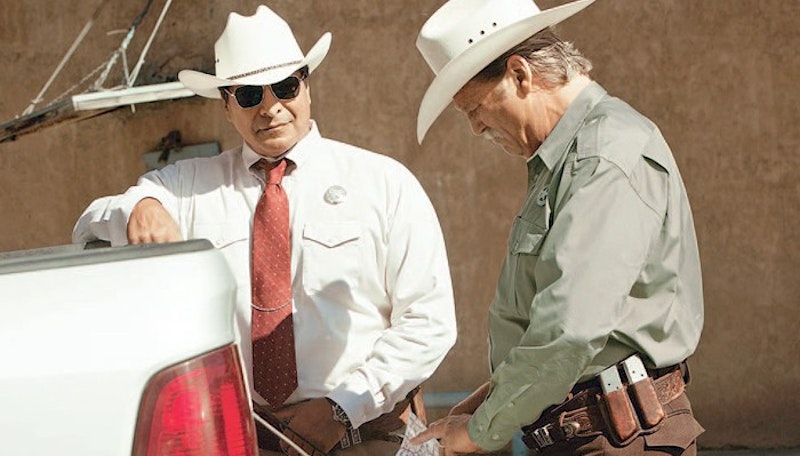 The best thing about Hell or High Water is that it’s planted in various durable genres, as well as American myth itself, while it's also very much of the moment. It’s a Western, road movie, and heist picture, all set unmistakably in depressed, post-2008 rural America.

Directed by David Mackenzie (best known for 2013’s Starred Up) and shot on location in West Texas, the film is structured like a Western. There’s a pair of robbers knocking over a series of banks, and two lawmen chasing them. But there’s actually a lot more to the film than that—it has things to say about the economic crisis, the abandonment of rural America, and (especially) evil bankers.

The bank robbers are Tanner Howard (Ben Foster), a career criminal and recent ex-con, and his brother Toby (Chris Pine), a more respectable type who nevertheless hasn’t seen his kids in years. They embark on a series of robberies, armed with a sophisticated, very specific plan. I won’t share all the details because it’s just too ingenious, but I will say it involves multiple robberies of branches of the same bank, casino visits, burying cars, and the settling of a reverse mortgage.

Chasing them are a drawling, mumbling Jeff Bridges as a soon-to-retire Texas Ranger, repeatedly directing lazy racial slurs at his Mexican/Native American partner (Gil Birmingham). The relative lack of interactions between cops and crooks is just one of many debts Hell or High Water owes to the Coens’ No Country For Old Men; the older, philosophical cop is another.

Throughout, the film has some beautiful visuals, mostly of rural West Texas highway vistas, contrasted with the occasional depressed town. There’s even one standout action sequence, on top of the various robberies. The other surprise is the lack of humor. Despite the pitch-black subject matter, the script, a former Black List honoree written by Taylor Sheridan (Sicario), has room for some laughs. I’m still giggling over a certain diner waitress’ monologue about T-bone steaks.

Hell or High Water is also carried by its performances. This is the best turn of Chris Pine’s career by a mile, and one of Ben Foster’s best too. Bridges is fine—the character limits him somewhat, but Birmingham is just wonderful as his long-suffering partner. And there’s a fantastic little performance from Katy Mixon—the girlfriend from Eastbound and Down—as a world-weary diner waitress.

The one big flaw? There’s just a little too much use of dialogue to spell out the obvious. The characters’ motivations are clear enough that it’s not exactly necessary for them to deliver long speeches explaining themselves.

The catastrophic, generational struggles of America’s poorer mostly white regions have been well-documented this year, especially with both presidential candidates playing half-hearted lip service to the problem. It’s begun to break through in culture too, especially with the acclaimed new book Hillbilly Elegy. Along with the great TV series Justified, Hell or High Water is the closest to a defining cinematic telling of the phenomenon.

To imitate the style and structure of Martin Scorsese’s work, especially gangster epics like Goodfellas, Casino and Wolf of Wall Street, is an errand attempted by many filmmakers good and bad over the years. In most cases, especially David O. Russell’s execrable American Hustle in 2013, it just plain wasn’t worth the trouble.

War Dogs, directed by The Hangover and Old School auteur Todd Phillips, is one of the better Scorsese imitation attempts to date, probably the best since Boogie Nights in 1997. It’s nowhere close to the real thing, but still an obvious step up for its filmmaker.

The film is based on a Rolling Stone article from 2011 by Guy Lawson, one of those stories that had “future movie” written all over it (it was later adapted into a book with the wonderful title Arms and the Dudes). It told the true story of a pair of twentysomething Miami stoners who suddenly became international arms dealers during the Iraq and Afghanistan wars, exploiting loopholes in the Pentagon’s defense contracting process to enrich themselves, to the tune of hundreds of millions. They later ran afoul of the law after violating several arms embargoes, while carrying out a scheme to hide the geographical provenance of Chinese bullets.

War Dogs tells the story, taking various liberties with the truth and inventing various details, from a girlfriend character to a Jordan-to-Iraq escapade out of whole cloth. The Goodfellas/Casino parallels are legion: it’s based on a true-life crime story about an outsider who joins and is slowly corrupted by a criminal enterprise. Things in the third act spin out of control. There’s a soundtrack heavy on the hits of the 1960s and 70s. There’s even a small part for Kevin Pollak as the enterprise’s “silent partner,” just like he was in Casino.

Hill is the best thing about the movie, playing his character as an obese, monstrously sleazy hedonist, one who makes Hill’s perverted, 'ludes-scarfing Wolf of Wall Street character look like nothing. Less successful are Ana de Armas as Teller’s thinly-drawn girlfriend, as well as Bradley Cooper, in a small part as an international arms dealer. Cooper is somewhat miscast, and one gets the sense he was shoehorned into the film because he offered to do a favor for his Hangover director Phillips. This was clearly something Phillips was building towards, since the third Hangover movie came across as less a comedy than an action thriller that happened to star the Hangover characters.

The other thing I like about the movie was that it captures a distinct flavor of specifically Miami, on-the-make Jewishness, one I associate with Brett Ratner (who’s listed as a producer) as well with two-thirds of the guys on my high school Israel trip. War Dogs also accomplishes most of the things that Michael Bay’s Pain & Gain tried and failed to do.

Is War Dogs entertaining? Yes. Would a movie of the same story directed by the actual Martin Scorsese have been much better? Of course.