Paving the way for martial arts stars such as Jackie Chan and Jet Li, Game of Death (1978) was Lee's swan song. 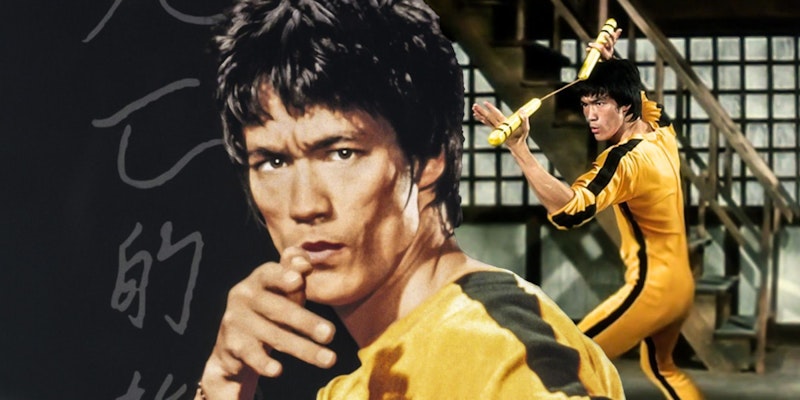 After filming Enter the Dragon, Bruce Lee died on July 20, 1973, at 32. He died from a freak allergic reaction to the tranquilizer meprobamate, which he took to soothe headaches from a previously diagnosed cerebral edema. Doctors ruled Lee's demise as “death by misadventure.” He never lived to see his most popular and beloved film's release. And he never lived long enough to finish Game of Death.

In 1972, principal photography on Game of Death was put on hold in the middle of production so that Lee could appear in Enter the Dragon. Lee's sudden death left Game of Death unfinished. Only 40 minutes of the ending scenes were filmed, leaving the first half of the movie empty. Many considered the project useless. Others still had hope.

The original script for Game of Death was written by Lee and revolved around his character Hai Ten retrieving a stolen national treasure from a five-story pagoda in South Korea, each floor containing a different martial arts opponent. The final boss was to be Kareem Abdul-Jabbar as Mantis (“Hakim” in the final film). The fight scene between Lee and Abdul-Jabbar is one of cinema's greatest.

After Lee's death, however, the script was significantly altered. Co-written by Robert Clouse, under the pseudonym Jan Spears, the new plot revolved around Billy Lo, a popular martial arts movie star. When he refuses to concede to a group of thugs who want Lo to work for them, they have Lo assassinated during the movie's production, one of the thugs posing as an extra and shooting Lo during a scene. (Bruce Lee's son Brandon later suffered the same fate in real life: he died in 1993 after being accidentally shot on set with what the crew thought was a prop gun during the filming of The Crow.)

In the new script of Game of Death, Lo lived through the attempted assassination, but his enemies continue to believe he’s dead. He uses disguises to creep into their homes without being recognized and kills them one by one. The disguises are a natural solution to making a movie with doubles and without Lee, using Yuen Biao and Kim Tai-jong as his respective stand-ins.

As if resuming production without Lee wasn't ballsy enough, Clouse took it further: incorporating actual footage from Lee's funeral in the new film, which was eventually released in 1978. Colleen Camp became the equivalent of a Bond girl in Game of Death (only a year after appearing in the sleazy and similarly named Death Game), singing a song in a movie with Bruce Lee years after his death.

Following Lee's death, Abdul-Jabbar refused to go anywhere near the film. He wouldn’t act in any remaining scenes out of respect for his friend. However, the legendary fight scene between Lee and Abdul-Jabbar had already been captured and is known as one of the greatest and influential fight scenes. Many directors have paid homage to Lee's unforgettable black and yellow track suit, such as in Quentin Tarantino's Kill Bill, which features Uma Thurman's character wearing a nearly identical track suit in the iconic Crazy 88 scene.

Even though the film isn’t what Lee envisioned, Game of Death is undoubtedly one of Lee's greatest films. Paving the way for martial arts stars such as Jackie Chan and Jet Li, Bruce Lee's craft was his life.