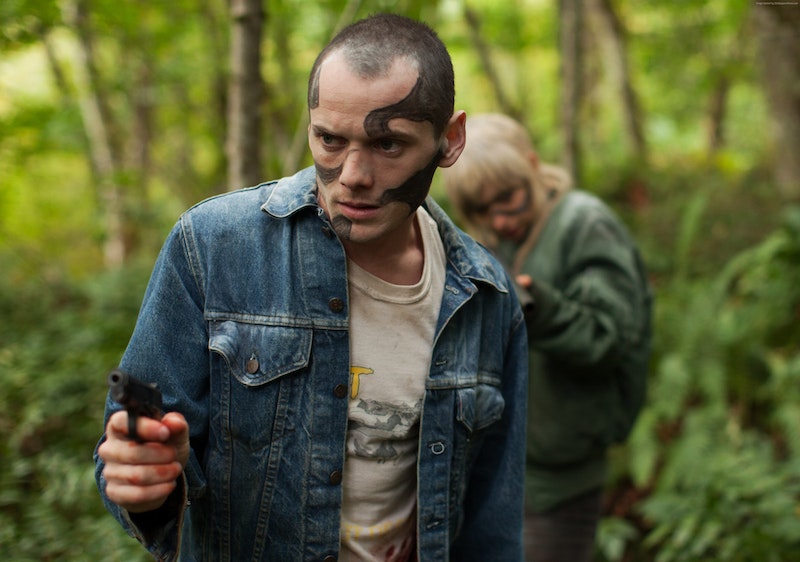 Agreeing to play a show at an unfamiliar location with people you don’t know is a bad idea. Deciding to perform a “fuck Nazi punks” cover at that unfamiliar location upon learning that it’s a white power stronghold is an even worse idea. Green Room is a movie about a hardcore punk band (the Ain’t Rights, as portrayed by a quartet of adept Hollywood C-listers) that does both of these things. Why? They need the money; they need the exposure; the show they thought they were set to play fell through. We can all roll our eyes at this, but the truth is that none of us is in complete control of our destiny; life itself is an endless series of improvisations.

Blue Ruin, writer/director Jeremy Saulnier’s previous film, was a pure revenge thriller where a protagonist’s drive for vengeance took center stage; there was no notion of the supporting cast as characters with inner lives. Green Room, by contrast, contains multitudes: it’s an unlikely redemption story, a neo-Nazi empire saga, and a modern punk-rock travelogue rolled into a single bewildering package. Saulnier nimbly sketches the band’s ethos and collective persona—minimal online presence, game to siphon gasoline, pointedly from Arlington, not D.C., goofy camaraderie—and then introduces them to an unfriendly venue. The show itself isn’t the nightmare it should be, but afterwards, the green room is revealed as a murder scene, which is when everything gets real, the “horror thriller” descriptor on the Green Room Wikipedia page comes into play, and by going into greater detail beyond “a lot of people die in violent ways” or “duct tape is quintessential,” I run a real risk of spoiling this movie.

The Ain’t Rights find themselves trapped within a compound that mirrors the movie, adjacent to a control panel at the core of a larger machine they don’t understand soon enough. And enough of Green Room is devoted to the workings of that machinery that the audience gradually ends up in a weird position: hoping that the captives make it out alive but warming, sort of, to the white power braintrust whose stake in all of this is something greater than just running a punk club in a secluded forest clearing. “These neo-Nazis don’t seem evil,” you think. “The young ones are misguided and confused, the older ones love money too much.” An entirely separate movie or miniseries could be devoted to the character Patrick Stewart underplays, or to the lieutenant who loves his fighting dogs, or Blue Ruin star Macon Blair’s role as a sort of uncommitted Fourth Reich assistant franchise manager; there’s an entire subcultural ecosystem hinted at here in procedural deadpan that’s more fascinating than it probably should be in a post-Sons of Anarchy world.

Yet back in the green room—Saulnier cuts back and forth—we’ve got post-Panic Room ennui: young adults who thought they were rocks trying to scramble past a hard place, only to find harder and harder places, and inventive uses for duct tape. Improvisation is everything.