Dracula Cannot Be Staked to Your Continuity

The lapses in vampire logic of Dracula Has Risen From His Grave. 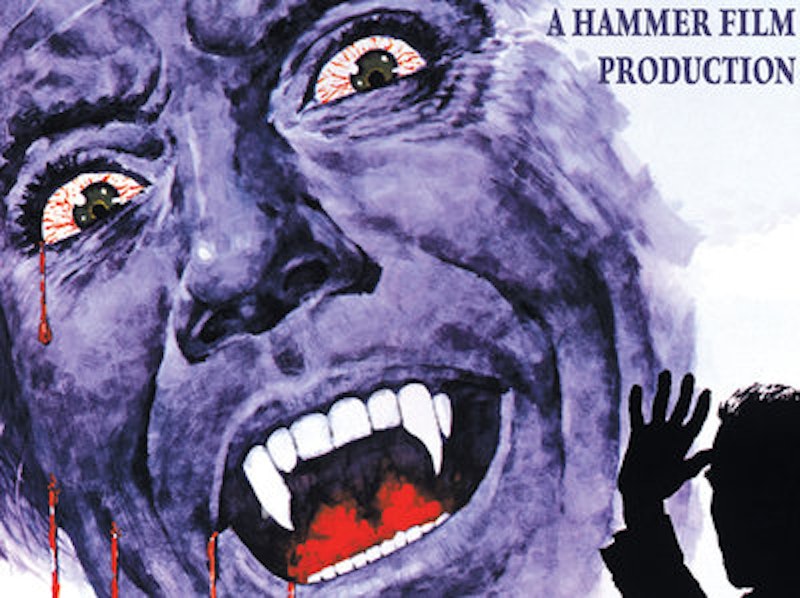 This is the fourth in a series of posts on the nine Hammer vampire films. The third post is here.

Dracula Has Risen From His Grave (1968) was one of the most successful and controversial entries in Hammer's vampire series. The controversy didn't center on the gore—though the opening scene, with blood slowly dripping down a bell-rope and a female corpse shoved into the bell—is one of the most gruesome in the series. Nor was there an uproar about sex, though the vampirism/intercourse metaphor is thrust forward with unprecedented determination. In one scene, Christopher Lee's Dracula has his way with the virginal Maria (Veronica Carlson) on her bed, and then brutally throws her doll to the floor, just in case you missed the fact that innocence has been lost.

Blood and sex aren't shocking in a vampire movie; they're what you expect. What truly horrified viewers and fans was something else; a hideous deviation from vampire lore. Late in the film, Dracula has a stake driven through his heart—and doesn't die. Instead, as the villain thrashes and pumps blood from his wound, a priest (Ewan Hooper) informs the brave staker Paul (Barry Andrews) that he has to pray if he wants to finish Dracula off. Paul, alas, is an atheist, and can't pray—so Dracula pulls the stake from his chest, and lives to bite again.

Christopher Lee himself disagreed with screenwriter Anthony Hinds' treatment of the scene. "It was all wrong that Dracula should have been able to remove the stake," Lee argued. "Everyone knows a stake through the heart is the very end of a vampire. I objected at the time but it was overruled." Lee also called the scene "absolutely ludicrous" since it was "tampering with basic mythology." His opinion was shared by numerous viewers, according to TCM, which says that "Horror fans remain divided to this day" by the departure from vampire canon.

When I watched the film, I barely noticed that the mythology had been tweaked. I certainly know that prayer isn't usually required to finish off the vampire—but I just figured, well, I guess they need prayer in this film, if that's what they say. Vampire films are only loosely attached to reality in the first place; they're constantly making up rules as they go. In this film, as in the entire series, it's never exactly clear why some of those Dracula bites turn into vampires, while others simply become his thralls. Is it a matter of blood loss? Does Dracula pick which turn into vampires? Similarly, Dracula's physical strength varies wildly; sometimes he seems much more powerful than a normal human, and sometimes humans beat the snot out of him with relative ease.

And of course Dracula keeps surviving his own destruction in ad hoc ways. In Dracula: Prince of Darkness, we're assured that the vampire's submergence in running water will be the death of him. But then at the beginning of Dracula Has Risen From His Grave you discover the running water didn't kill him right away after all, and he's been preserved frozen in ice. And why can vampires turn into bats in the second Hammer film but not in any of the others?

The answer to most of these questions can be summed up in two words: narrative convenience. You need more than a stake to kill Dracula in Dracula Has Risen From the Grave because the filmmakers hadn't gotten through their runtime by the first staking—and also because they wanted to emphasize the Christian/atheist conflict, which provides much of the film's (fairly half-assed) thematic coherence. Dracula can't survive immersion in water at the end of one film because the movie is supposed to end with his death; he can survive it at the beginning of another because otherwise you'd have no sequel. And so on, up to and including the fact that in several of the earlier films, night looks exactly like day. Night-shooting is expensive, so the characters look out on a brightly lit forest and say, "It's dark out!" and you have to go along with the fiction that, in this world of vampires, midnight and noon are indistinguishable.

Continuity has become more important in pop culture as superhero and other geek fandoms have become increasingly mainstream. The MCU makes an effort to keep Iron Man's powers consistent from movie to movie; even James Bond in the modern era has begun to remember whom he slept with in the previous films. The Hammer films reflect a lower budget approach to filmmaking, in which Dracula doesn't even necessarily remember that he should probably want revenge on Van Helsing because hiring Peter Cushing and Christopher Lee both would bust the budget. Consistency is expensive; Hammer doesn't have the funds for it.

Beyond the logistical issues, there’s some in-continuity justification for the holes in Hammer continuity. The MCU films, or the Star Wars films, or other big budget efforts, are about worlds that deliberately make sense. In Star Wars the mystical force can be quantified with a blood test; in the MCU physicists plum the secrets of the Norse Gods. These are multi-verses in which wonders are arranged in bright wikis for easy perusal; you go in with the assurance that night will look like night, day will look like day, Kryptonite will make Superman weak without having to say a prayer over it, and justice will prevail.

This isn’t the case for the Hammer Dracula films. Yes, one interchangeable protagonist or another manages to provisionally defeat the monster at the end of each installment. But the energy of the films is elsewhere. The ominous blood dripping down the bell rope is a lot more memorable than Dracula's pro-forma end when he slips and impales himself on a cross. Maria's rescue from the fiend is much less vividly imagined than the frank sensuality of her response as the same fiend nuzzles her face in anticipation of the bite. The virtuous plot, with its neat Hollywood end, is at odds with the commands of those hypnotic bloodshot eyes in close-up after close-up. Overtly, the film tells you to see justice done. Covertly, it demands you see your way to more perverted pleasures.

And if the film urges you not to trust your eyes, why should you expect to trust your eyes? Especially under Freddie Francis' vivid, imagistic direction, Dracula Has Risen From His Grave comes across more as a dream than a heroic narrative. In an ordered world, the dead stay dead. Vampires draw their terror, and their pleasure, from following different rules.