The Kitchen is more interesting for its influences and ingredients than the film itself. C- 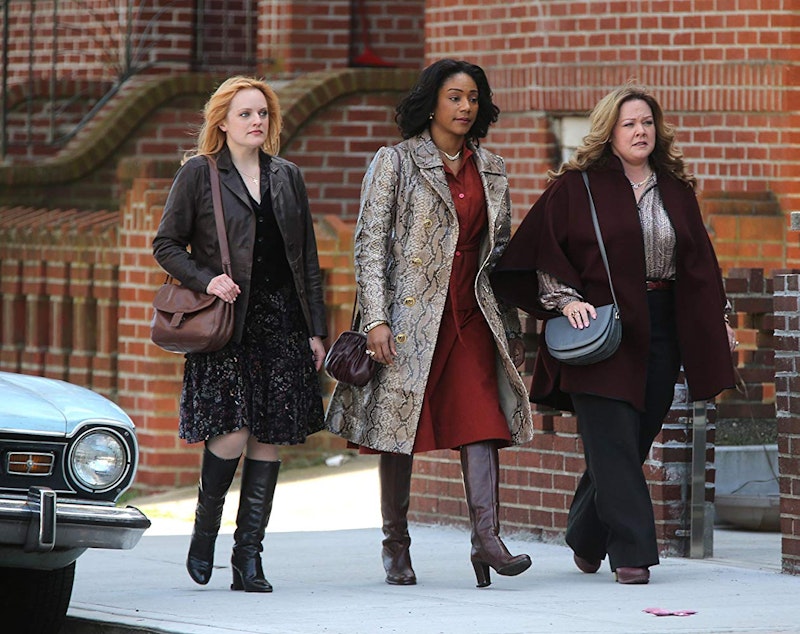 The Kitchen is one of those movies that's more interesting for the different influences and inspirations it fuses together than for anything that happens on screen. The film wastes a talented cast, as well as a premise that starts off promising but then goes off the rails quickly.

The film, directed by Straight Outta Compton co-writer Andrea Berloff, is based on a DC Entertainment comic book series, although its primary inspiration seems to be Sidney Lumet's New York City crime dramas of the 1970s, as well as the films since that have ripped those movies off. The Kitchen has more in common with the latter.

The concept here is that Melissa McCarthy, Tiffany Haddish and Elisabeth Moss are the long-suffering wives of a trio of low-level Irish gangsters in Manhattan's Hell's Kitchen section, in the late-1970s. When the three husbands head off to prison for three years and the wives are left with nothing, they try their hand at the criminal enterprise. First, they're dabbling in protection rackets and loan-sharking, and eventually graduating to more violent ventures. Before long the trio is essentially running crime in midtown Manhattan.

The idea of novices suddenly jumping into crime, and being really good at it, isn't a new concept, and it's been at the center of everything from Breaking Bad to last year's Widows. The Kitchen gets off to a promising start, once it establishes that there are certain skills the women possess that make them particularly good at this sort of work. But before long, the film collapses into murder after murder after murder.

Not that I'm opposed on principle to on-screen murder. But at a certain point the plot of a movie stops being interesting when the solution to every problem, in almost every scene, is someone getting whacked. The movie also doesn't really deal with the moral dimension of people who’ve never killed before suddenly doing it all the time.

It's also a matter of plausibility. You'd think a succession of dozens of murders, all in the same couple of blocks of midtown Manhattan, within a short period of time, would attract attention from both the police and media, but it appears that just one cop is looking into it. In addition, the mechanics of the crime plot aren't explained clearly, each plot twist is sillier than the last, and there's a subplot involving a group of Hasidic merchants that flirts with anti-Semitism.

McCarthy and Haddish are both strong in the sort of dramatic roles with which they're not normally associated, while Moss probably gives the film's best turn as a long-battered wife who finds new purpose—even if that purpose takes the form of grisly murder and dismemberment. The actress is on a tear this year, with standout performances in movies as different as Her Smell and Us, and if you liked watching her on The Handmaid's Tale this season, there's more of that here.

As for the supporting cast, Domhnall Gleeson appears, somewhat against type, as a gangster, while Bill Camp luxuriously overacts as an Italian mob boss. Margo Martindale channels Nancy Marchand's Livia Soprano as Haddish's hateful, sour mother-in-law, while there's even a part for the long-MIA actress Annabella Sciorra. The film's version of 1970s New York is believable, although not built out to the impressive scale of HBO's The Deuce, which is also set in the city in a similar time period.