Kevin Smith is the Sarah Palin of Cinema 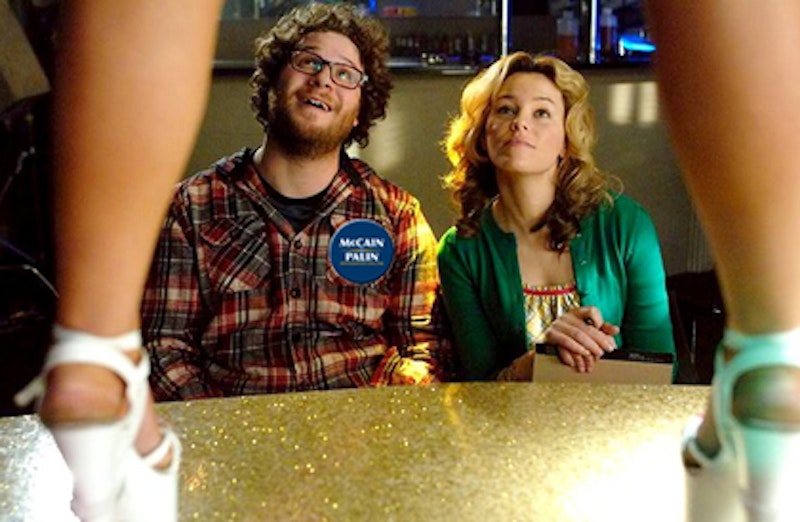 The scrappy, vulgar charm of Clerks, Kevin Smith’s purposefully inauspicious 1994 debut, blinded many viewers to the fact that its triumph was economic, not artistic. Many filmmakers before Smith filled their screens with non-professional actors and their scripts with conversational, naughty-for-their-day riffs. Clerks was instead successful because it embodied the early- to mid-90s indie ideal of authenticity, which was an economic one; made on a sub-shoestring budget, its juvenile raunchiness carried the weight of a class war cry. Smith’s film proved that movies don’t need to have marquee names or studio funding to be successful, as audiences and festival judges flocked to it. The film grossed over 10 times its production costs, then inspired a comic book, TV cartoon, and 2006 live-action sequel. It also tricked the world into thinking that Kevin Smith is an actual director.

The underdog spirit of Clerks made its immature brashness seem natural and appropriate, but since 1994 Smith’s budgets have increased while his sensibility remained somewhere in between the Farrelly Brothers and a fifth-grader leering at his dad’s Playboys. Smith made the same mistake as his audience and assumed that Clerks’ crassness was its charm, then he took it a step farther and confused that crassness with intelligence. Hence Dogma, his attempt at agnostic skepticism, fell smart-assedly flat, and he couldn’t even coax a funny line on the subject out of George Carlin. The proud crudeness of Smith’s “dudes sitting around talking about pop culture and boners” aesthetic only has value when posited as an alternative to perceived Hollywood stodginess; now that Smith enjoys Hollywood-level budgets and cache, he’s just a hack who caters to his audience’s worst instincts and behaviors.

The problem isn’t just that Smith’s a bad filmmaker, it’s that he takes a certain shameful pride in his movies’ and characters’ failures. He doesn’t just make movies for emotionally stunted losers, he makes movies about them, justifying cultural and comedic laziness in the process. He is modern cinema’s answer to Sarah Palin, whose culture-war mongering rhetoric over the last eight weeks has similarly implored people to rest on their anti-intellectual laurels. Both Palin and Smith became famous by positioning their proud anti-intellectualism as somehow righteously anti-establishment—Palin boasts of being a “Washington outsider” as if it were proof of her qualifications, while Smith has collectively bundled his New Jersey-set paeans to white suburban sloth in the so-called “View Askewniverse”—while simultaneously celebrating the populism inherent in their visions.

This is why so much of Smith’s humor (as it were) is really just slacker familiarity with pop culture errata: Zack and Miri is powered by references to Paris Hilton, Sleeping With the Enemy, Glengarry Glen Ross, Star Wars and more. Most of these references aren’t even really jokes in the categorical sense, but their mere mention elicited laughs from the test audience I saw the movie with. This is simply Date Movie or Epic Movie’s parade of tabloid punchlines with a false sense of superiority since some of the references are slightly older.

Smith and Apatow, like Palin, hold up disaffected white malaise as an ideal worth treasuring; the filmmakers value coastal stoner idiocy while Palin idealizes rural cultural intolerance, but all three ennoble and applaud their constituents’ entitlement, whether to hunting and religion or bong rips and masturbation. They all valorize an ability to “tell it like it is” by shirking political correctness, and they all of course exploit the same “I’m just like you” connection with their audience for financial or political gain. (A look at “Jay and Silent Bob’s Secret Stash,” either in physical or digital form shows that Smith’s self-branding ambition is worthy of Oprah, another Zack and Miri namedrop recipient.) Palin’s abhorrent disregard for science likewise has a parallel in Smith’s rejection of cinematic craft; his movie has a television flatness to it visually, and his “romantic” moments always fall back on pop music cues to shoulder the emotional heft. A midpoint script reference to Kurosawa exists just to lower the Japanese legend in to the pop-referential gutter.

There is one moment in Zack and Miri Make a Porno that goes beyond rote glorification of heterosexual white-guy ideals. At his high school reunion, Seth Rogen’s Zack meets a gay couple who begin to bicker in front of him. “They fight just like real people!” he exclaims gleefully, which is an honest sentiment and a cleverly satirical one. But rather than continue down this road—addressing, for instance, what pornography’s late-20th century proliferation did for society’s increased sexual-political liberalism—Smith runs full-steam towards his hackneyed romantic plot between the title characters. Before long, the ambition-less, self-loathing Rogen character brings the cute, bubbly Miri (Elizabeth Banks) to a transcendent orgasm and Smith pans back as she reclines, mouth agog, her infatuation with the schlub simultaneously consummated and broadened; Smith’s ode to hetero geek fantasy enactment is complete.

I’ve lauded them in this space before, but it’s worth noting again that Rachel Getting Married and Happy-Go-Lucky offer necessary retorts to Smith’s self-satisfied artlessness and emotional ignorance. Both explore contemporary life and relationships with intelligence and empathy rather than congratulating the unambitious for being “real.” This fall, they are the change that moviegoers need.