See it With Friends

Some movies, like the recently-released film of Noah's Arc, only make sense when you experience them with the cult. 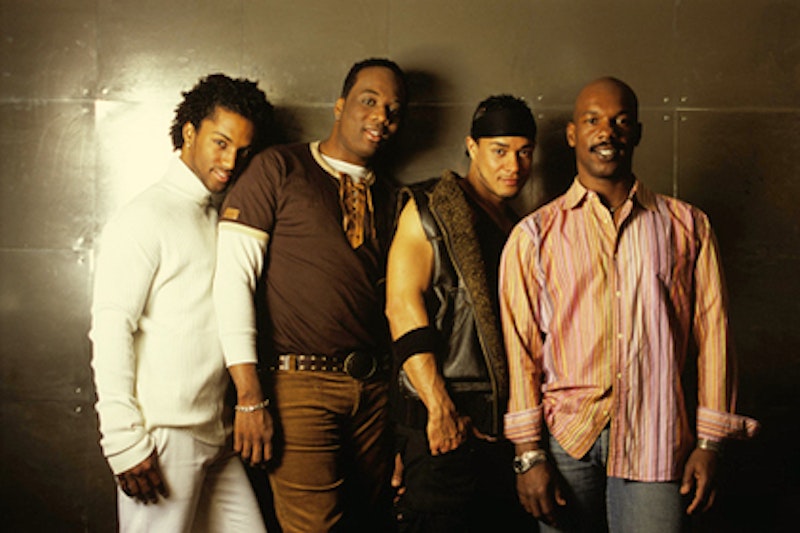 Trashy is always popular, so I should have known the seven p.m. showing of Noah's Arc last Saturday would be sold out. For those who don't know, Noah's Arc was the first sitcom on Logo, America's first gay cable network, and the MTV-owned channel made a ballsy move by giving its first original gay show an all-black cast.

The show was trash, and this is coming from a member of the target demographic. It had bad writing, bad acting, trashy clothes, too much skin and weak plots. But the movie, out this week in select cities, is not so terrible. Yes, the writing is better, the jokes sharper, the camerawork more sophisticated—the clothes are still trashy, but set in wintry Martha's Vineyard, everything looks better. (A smart move by the producers for cutting costs by choosing one location, a summerhouse in the winter, when rent is cheaper but the cold weather makes men's clothes more interesting).

What made the difference, though, was not the writing or the fashion but something that gets neglected in a lot of reviews: the audience! The audience can make a movie. While watching Noah's Arc, I was treated to the hoots and hollers of probably about 300-500 black gay men, shouting "hell no!" and "what are they playing?" The call-and-response was great fun, and it made unfunny—or poorly scripted—moments in the movie a heck of a lot more entertaining.

An enthusiastic audience will help smooth over some of the weak parts of a mediocre film. Bad writing, for example, is a staple of the gay movie, and Noah's Arc, though much improved from the show, is no exception. At one point, Ricky the "slut" character tells Noah the "Carrie" character that his wedding day should be "magical special wonderful amazing." Let me repeat: magical...special...wonderful...amazing. I'd rather he say "good." But the gasps and cries of disbelief in the audience at the revelation that Ricky is in love with Noah—shock!—made me forget all about that unfortunate string of adjectives.

In the end, these movies are more about the joy of seeing yourself—or an idea of yourself—on the big screen. There aren't many movies with black gay characters as leads, let alone a movie full of them. So important is Noah's Arc that there were several old gay men and women in the audience who clearly had been waiting decades to see a movie like this.

The feeling, I think, is most powerful for non-white male audience: women, gays and blacks, who don't often get the thrill of seeing movies about their fantasies. There are other movies that serve this purpose. The most notable is Sex and the City. What critics didn't understand about Sex is that its appeal didn’t rest on the movie itself, but the audience watching it: the women who want that life, who dream of better things. It was about "ooohing" and "aaaahing" at designer purses, big closets, Carrie's weight (at 43 she is teeny!), and Manhattan real estate. The audience went crazy when I saw it opening night. That was half the fun.

Most gay movies have the same effect: Eating Out and Not Another Gay Movie (both have sequels) are terrible by most objective standards, but you go see them with friends and then laugh at how ridiculous they are. Similarly, see a Tyler Perry movie on opening night and it's like being in church—or on the chitlin’ circuit. Black performance is often about call and response, and it's not surprising to hear a "hell no!" coming from the seats. Watching videos of Tyler Perry's plays are a family event. My family watches them at Christmas and Thanksgiving.

Much like the thrill black people had when blaxploitation first hit theaters movies a few decades ago, there are many so-so or downright awful movies today people see only to be around other people who'll also eat the trash. From midnight movies—Buffy sing-alongs anyone?—to late-night action flicks, a movie doesn't have to be great to be worth your money. Just make sure the theater's packed.