Film Review: Fate of the Furious Is Exactly What It Should Be

More of the same. A- 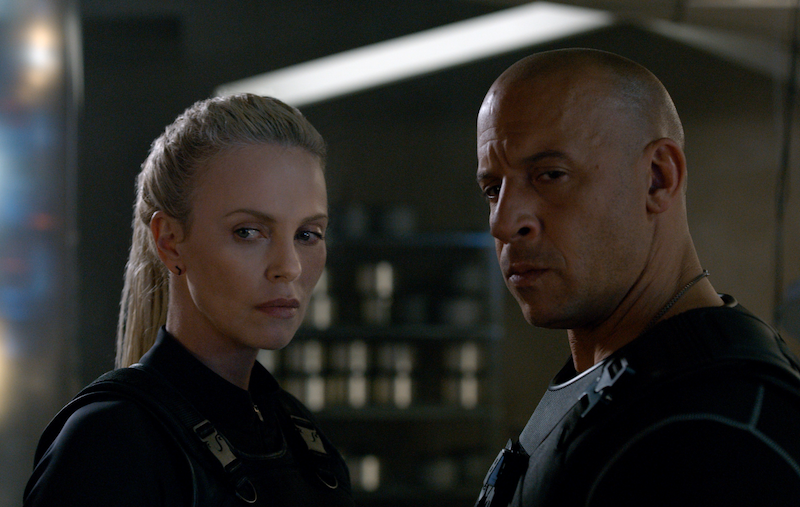 Much has been written about how the Fast and the Furious franchise, which began with a rinky-dink L.A. drag racing adventure in 2001, has grown into a franchise that’s massive in every way, from budgets to box office numbers to explosions to geographical scale to the size of both the cast and the biceps of the key performers. And every one of those things gets bigger with every passing installment.

Fate of the Furious, the eighth film in the series, keeps that progression going. It’s the loudest, most expansive, and the biggest film in the series to date. For old times' sake there's an opening car chase, in Cuba. But most of the running time incorporates such concerns as nuclear footballs, electromagnetic pulses and Siberian submarines. It’s all more ridiculous and implausible than ever. But it's so entertaining that I haven't stopped smiling yet.

While Fast Five was a heist film, Fast & Furious 6 was dedicated to cars flying through the air and Furious 7 built towards the farewell to the late Paul Walker, Fate of the Furious is distinguished as the most pro wrestling-inspired Furious film yet. Dwayne Johnson, in particular, busts out a couple of his old moves, and shouts out threats to foes that sound a lot like his WWE “promos.” And most notably, one character has a face turn, and another a heel turn.

The big twist this time is that Vin Diesel’s Dominic Toretto is placed on the opposite side as his ever-growing team, due to a blackmail plot by a sexy cyber-terrorist (Charlize Theron, overacting delightfully). It’s up to the rest of the team—Dwayne Johnson, Michelle Rodriguez, Tyrese Gibson, Ludacris and Nathalie Emmanuel, along with scene-stealing secret agent Kurt Russell and the returning Jason Statham—to figure out why their friend has betrayed them, as the action leapfrogs from Cuba to Germany to New York to remote Siberia. There are also stretches set on a stealth airplane and in an “undisclosed location,” which is identified on screen as “Undisclosed Location.”

The best part of the film is the series' first foray into New York City, a jaw-dropping sequence in which seemingly every car in midtown Manhattan is hacked and taken over, forming a herd-like line that reminded me of the dogs chasing Nicolas Cage in Raising Arizona. The other highlight? There’s a scene in which Statham gets into a gunfight while holding a baby—which sounds impressive until you remember that in 2007’s Shoot ‘Em Up, Clive Owen shot at bad guys while delivering a baby.

F. Gary Gray (Straight Outta Compton and the Italian Job re-make) steps in as director for the first time, and he keeps up the ever-escalating tone brought to the last few films in the series by Justin Lin (#s 3-6) and James Wan (who did Furious 7). With the exception of a shakycam-filled prison riot sequence, the action is expertly crafted. Also to thank is a roster of credited stuntmen that’s in the mid-hundreds.

But the secret MVP of these recent films is Chris Morgan, the lone screenwriter of the last five movies in the series. Morgan’s never written anything else of note outside the Fast movies. I’ve never read a profile or an interview with him.

But give credit where it’s due: the structure of these films is something to behold. That’s a huge cast to juggle, and a ridiculous plot to have make sense. Over and over, Morgan’s screenplay solves glaring plot holes with single lines of knowingly hilarious expository dialogue. Morgan may not be in line for an Oscar, but he does deserve some appreciation, especially in an age when blockbuster action films are a lot more likely to credit five or more screenwriters than one.

Of course, when it comes to this series, it's best to not pay too much mind to errors of continuity and plausibility. We must accept that in this universe, characters will walk away unscathed from fiery crashes, sometimes more than once. The laws of physics and gravity don’t apply. Everyone’s electronics will work perfectly minutes after an electromagnetic pulse. A child conceived 10 years and four movies ago is only about six months old. And most implausibly of all, that a Russian defense minister is depicted on screen without Trump cronies seated on either side of him.

But even so, there’s not really any precedent for the Fast and the Furious franchise: the series starts off minor and mediocre, and only gets bigger and more star-studded as the years go on. It’s possible that the Fast and the Furious bubble will one day burst, under the weight of the enterprise’s bloat and hubris—and with Diesel and Johnson allegedly feuding, maybe it’s already started. But one thing’s certain: these movies are still outrageous, ridiculous fun.