Journey to the End of Macho

Michael Winterbottom's The Trip series and its gradually increasing sadness. 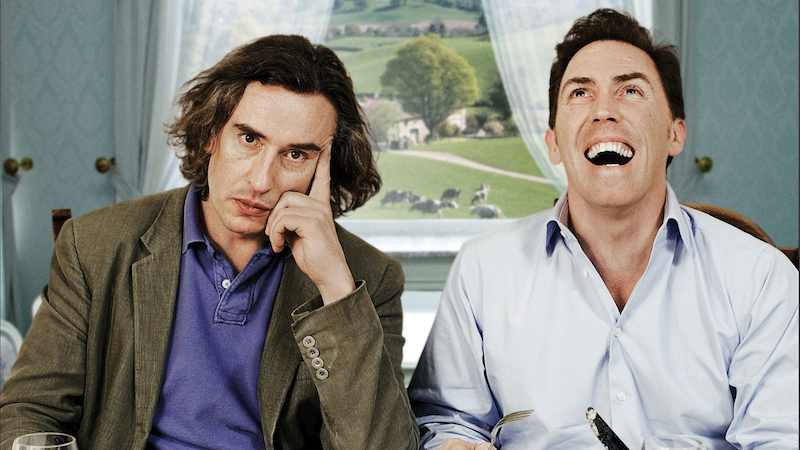 I’ve been thinking a lot about middle-aged men recently after watching The Trip, a series of travelogues where comedians Steve Coogan and Rob Brydon play fictionalized versions of themselves going through mid-life crises and doing the same impressions over and over again in very nice restaurants. They’re fun little movies, if tiring and sad; at first just thematically, but as the series goes on, its own repetition in trying to recapture past laughs coats it all in an awkward melancholy.

The Trip first became widely known in the United States because of a scene where these two middle-aged British comedians sit in a restaurant performing increasingly passionate impressions of Michael Caine in order to one-up the other. In many ways, it’s the core of the series, an idea first born during an improvised shoot with the actors on a rainy day shooting their earlier Michael Winterbottom collaboration, A Cock and Bull Story. Wherever they are in these films, whether it’s the north of England or some Greek Island, they’re doing their funny little impressions. It’s why they’re famous in the first place, it’s what the people came to see.

Winterbottom, as a 2000s independent filmmaker, uses the trips as more than just the setups for riff sessions. The actors confront their aging, insecurities, and fragile masculinity during their travels, and the two complement each other nicely: Steve’s the showy wannabe serious-movie-star ladies’ man, whereas Rob is the more contented family guy who’s comfortable with his relatively successful position as a TV personality. Each has to defend his position and one-up the other, however the films are more biased towards Steve’s perspective and more directly critical of his lonely life as a bachelor and separated father (reflecting Winterbottom’s own life). At first it's a funny and sad little episodic journey across a rural bit of their home turf, but The Trip to Italy, the first return of the series, finds a way to transcend its form.

This time, it’s Rob confronting his growing dissatisfaction with his domesticity, whereas Steve is making a sincere effort to better himself, by quitting all the partying, drugs, and alcohol and trying to reconnect with his son. Where they followed the romantics Wordsworth and Coleridge through England, this time they’re chasing Byron and Shelley down the peninsula. They frame themselves in the shadows of great, mythic men and wonder if they’ll ever be remembered. And as men of impressions they can’t seem to say much about the country without parroting some piece of local media they may not even understand.

One of the recurring characters in the series is Steve’s assistant Emma, who often acts as an insightful foil to the men. When Steve says he’s in Italy searching for a little “la dolce vita,” she points out that Fellini’s film is really about the vapidness of that lifestyle, which Steve can only counter with a sort of “Yeah, I knew that'' followed by the most pedestrian bit of trivia from the film: it’s the origin of the term “paparazzi.” Emma takes them to the catacombs in Naples because of a great sequence in Journey to Italy, Rossellini’s masterpiece about the past bleeding into the present through landscape, history, and travel. Perhaps the men didn’t know they were following in Ingrid Bergman and George Saunders’ footsteps when they looked upon an ashen corpse in Pompeii, with Steve projecting his own insecurities on the body and Rob deflecting by doing his classic small-man-in-a-box routine. Winterbottom understands this.

They’re on the last day of the journey and sailing into Capri. Emma points out the house from the end of Godard’s Contempt and mentions that there’s a song that plays over and over in that film that’s beautiful even if it becomes annoying through repetition, just as the opening strings to Strauss’ "Im Abendrot" (“At Sunset”) blare against the golden light covering the Tyrrhenian Sea. Winterbottom, too, is one for impressions: here, he’s also drawing heavily from Death in Venice, both the Mann novella and Visconti adaptation, which transforms the author’s writer stand-in to an aging composer obsessed with Mahler, whose 3rd and 5th symphonies are turned into leitmotifs for protagonist Aschenbach’s condition. Their beauty is overwhelming, and as both works suggest, true beauty can be so overwhelming that it can kill.

Rob cheats on his wife with a younger woman in The Trip to Italy. He isn’t proud of it, and the allure of running away from it all and staying on this reinvigorating voyage forever suddenly appears terrifyingly appealing. The film ends with him and Emma standing on a balustrade watching Steve and his son dive into the sea together. Rob tries to take the romantic’s stance about what to do next, whereas Emma says she loves the ending of Roman Holiday because the two lovers understand what they’re sacrificing because of their duties. It’s the unresolved dilemma at the heart of these films crystallized in a beautiful moment before it cuts to black. It is the highlight of the series, and it is never mentioned again.

As they keep journeying back over the years, it’s clear that they don’t have much more to say. While the actors were adamant that Italy was basically the exact same thing as their first go around, it’s iterative in a way that brings its formula to greater, even transcendent heights. Spain and Greece, on the other hand, are trying to recapture the magic and failing. It’s one thing to hear the Michael Caine impression twice, or even a third time to impress some women. But after a while it stops being funny because it's funny, it stops being funny because it’s annoying, it stops being sad because it’s annoying, and it starts just being sad.

The series may or may not know this, I can’t tell anymore. In Spain, when you think the trip (and film) is over and all part ways, the movie continues with a sequence featuring Steve staying in the Andalusian mountains trying to finish a book about his travels. He’s stuck in writer's block and starts moving again. Like Antonioni’s The Passenger in reverse, he takes a ferry across Gibraltar and into Morocco, before he runs out of gas somewhere in the Sahara. When he thinks he sees salvation over the horizon, he takes a closer look at the truck approaching him, and it’s implied they’re some kind of radical Muslim rebels (which the Western Sahara doesn’t have). It cuts back to Steve and ends with a freeze frame of his resigned face. I couldn’t resolve what they were trying to get at with this, and this, too, is never mentioned again. Some trip.