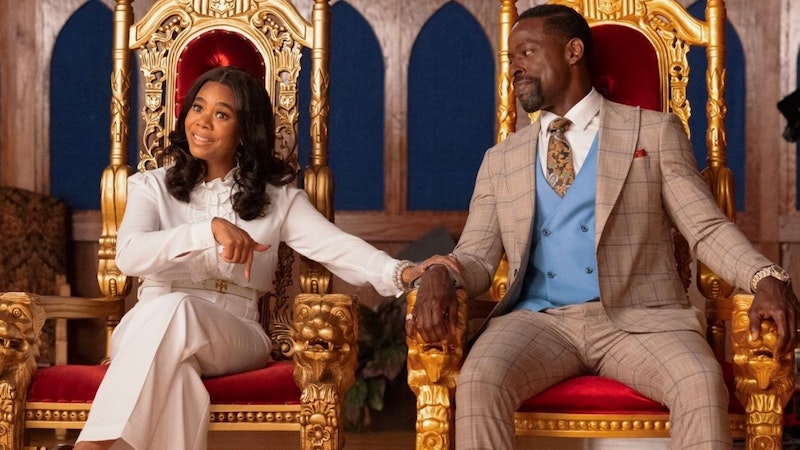 The new satire Honk For Jesus, Save Your Soul has a fat target for its satire, along with two outstanding performers in the starring roles. It succeeds in landing some punches, but the laughs peter out quickly, and its ending is a bizarre muddle. A Sundance debut earlier this year, Honk For Jesus lands both in theaters and on Peacock this Friday. Written and directed by Adamma Ebo (with an assist from her twin sister Adanne Ebo), the film’s a mockumentary that takes aim at the megachurch, the prosperity gospel, and the numerous hypocrisies therein. Coming from a long list of producers that includes Jordan Peele, Daniel Kaluuya, and both lead actors, the film was made by a director who knows that world well. (The movie was shot at the Cathedral at Chapel Hill, a Georgia megachurch.)

Sterling K. Brown, an award winner for This is Us, is Lee-Curtis Childs, the megachurch pastor, while Regina Hall is his wife Trinitie, the church's "First Lady." As the film begins, their church has been closed for six months, due to an unspecified scandal involving the minister, although they're aiming to reopen in time for Easter. They've hired a documentary crew to tell the story of their return. What we quickly see—and what the film does best—is that these two people are in denial of multiple things, and also on the verge of a crackup. It calls to mind Arrested Development. The film also keeps the nature of the scandal a mystery for a long time, although you'll likely guess relatively quickly.

While its's never said in the film, these two, who own a massive house, a fleet of cars, and closets full of expensive clothes—in addition to the church—are headed for financial ruin. The tension gets ratcheted up more and more, especially when a rival pastor couple (Nicole Beharie and Uchenna "Conphidence" Echeazu) threaten to steal their former congregants.

This is shaping up well, but the film blows it in the third act, with a weak and unsatisfying ending that doesn't tie up anything. Are we meant to conclude that these people are believing Christians? That they're full of shit, but other megachurches aren't? There’s also a scene that introduces a group of holdout congregants who are hilarious characters, but then the film does nothing else with them. As for the question of how complicit the wife is, the film doesn’t come to a conclusion (as opposed to last year's The Eyes of Tammy Faye, which skipped past its subject's likely participation in years of fraud in order to canonize her as "iconic").

Honk For Jesus, Save Your Soul seems inspired by the story of Bishop Eddie Long, also a megachurch pastor in the Atlanta area, known for the prosperity gospel and hoovering wealth from his church, and also implicated in a sexual misconduct scandal that cut against everything he preached. Long, however, never lost his church; he died of cancer a few years later.

The film arrives on the heels of the HBO series The Righteous Gemstones, which also satirizes Southern megachurch culture, albeit of the white, evangelical variety. That show's portrayal, with a much larger cast, is so multi-faceted that it doesn't do Honk For Jesus any favors.