The Last Laugh (1924) is one of the heights of silent cinema, a film featuring nearly no intertitles or dialogue. 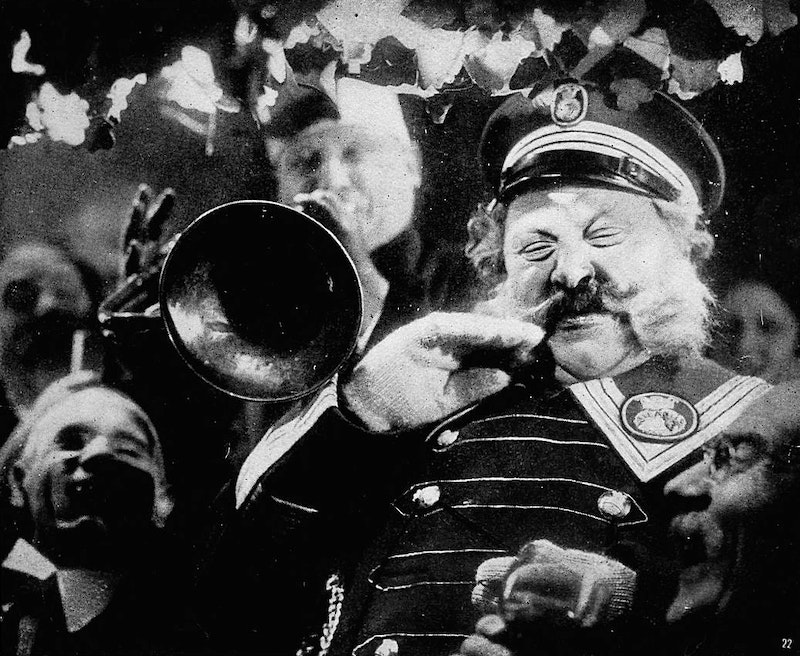 F. W. Murnau’s The Last Laugh (1924) was once summarized as “a nameless hotel doorman loses his job.” On the surface, why should we care about a hotel doorman suddenly unemployed? What could possibly happen of interest in the film? But that would be a superficial assumption. The Last Laugh isn’t just about one unimportant man losing his job but the depth of his interior life and the way he relates to the external world.

Emil Jannings plays the hotel doorman, who appears happy in his position. He works at a high-end hotel and relishes every moment, especially his intricate and dignified uniform. He has earned respect in the housing complex he lives in. The lower-middle class inhabitants admire him but not because of his personality. It’s the doorman’s uniform that gives them a sense of meaning and pride.

Things dramatically change when the doorman is demoted to a washroom attendant. The manager of the hotel notices that the doorman is getting too old for the job and instead of firing him, demotes him. This means complete humiliation. Suddenly, the dignified posture and a relative sense of certainty and magnanimity has vanished. Jannings changes his physical posture. Hunched over and crooked, favoring one side of the body, he becomes a strange monster, an outcast from society. But which society?

Murnau and writer Carl Mayer explore the huge difference between classes in Weimar Germany. The upper-class society didn’t care about the doorman to begin with. He’s an invisible man, and the most palpable change occurs in the housing complex. Trying to avoid ostracization, the doorman steals his old uniform, and continues to wear it when he goes home. He can’t show any other face to the family and friends, and so begins to live a lie.

But lies have a way of being found out, and in this case, they do. The doorman’s not only stripped of his uniform but also his pretense. The gossip begins to form and soon the entire housing complex knows the truth. Murnau creates a series of exaggerated images: faces of mockery and laughter as they find out that he’s now a washroom attendant. Everything is distorted, especially the faces. The laughter is a spectacle of unnatural emotion, and the faces take on a nightmarish quality. They’re not only mocking the doorman but also imposing their internal disorder on us.

Jannings’ facial expressions throughout the film are heavy with burden. His emotion, and especially, his interior life, is on full display. This is a great achievement on Murnau’s part, especially given the fact that the film makes no use of intertitles. Jannings uses his entire body to signify and illuminate the distortions of the doorman’s spirit. He descends into the cave of disgusting self-pity, still trying to emerge victorious in the face of reality. This victory, however, isn’t rooted in balanced desires of self-accomplishment. Rather, the doorman is in a complete denial of reality, and thus creates further illusions about his existence. His madness is muted and subtle.

Many critics have stated that the obsession with the uniform in The Last Laugh is the primary motif that moves the story. It expresses the German people’s love and admiration of the uniform, which would later be apparent in the rise of National Socialism. Siegfried Kracauer argues that “they [inhabitants of the housing complex] revere it [the doorman’s uniform] as a symbol of supreme authority and are happy to be allowed to revere it. Thus the film advances, however ironically, the authoritarian credo that the magic spell of authority protects society from decomposition.”

In this case, we can conclude that the consciousness of the German people is and has always been primed for submission. But Kracauer’s thesis goes too far in this case. The Last Laugh is a metaphysical and not political drama. The doorman’s existence depends on the uniform not because it’s revered but because he has come to define his personhood based on an object. The doorman’s incapable of seeing life beyond or even adjacent to the uniform because his ontology has become so entwined with his ridiculously simplistic task of clearing the revolving door of the hotel.

Everything is distorted. Murnau and cameraman, Karl Freund create exquisite effects only possible in dreams and nightmares. Very similarly to The Cabinet of Dr. Caligari (1920), nothing is certain and life is based on an illusion. Jannings’ doorman may not be the somnambulist Cesare, but he’s in some way sleepwalking through life. He has given up his free will and his mediocre existence is proof of this. It’d be a far-reaching argument to say that the doorman’s interior struggle can only be seen through the lens of the future, specifically the Nazis’ rise to power. Could we not say that, for example, Arthur Miller’s Willy Loman is in a similar position?

The disorientation, uncertainty, and absurdity flourish even more at the end of the film. Murnau introduced a “happy ending,” as distorted and ridiculous as the doorman’s irritating self-pity. One can’t help but think that the doorman’s destiny of happiness and prosperity is yet another irony and an appearance. Murnau has created a chasm between reality and illusion, and as expected, there’s no definitive resolve. No matter what “uniform” the doorman wears, he’ll still have to see his own face in the mirror, an event unlikely to occur.