House of Darkness is a tepid chamber piece that devolves into #MeToo horror by the end. 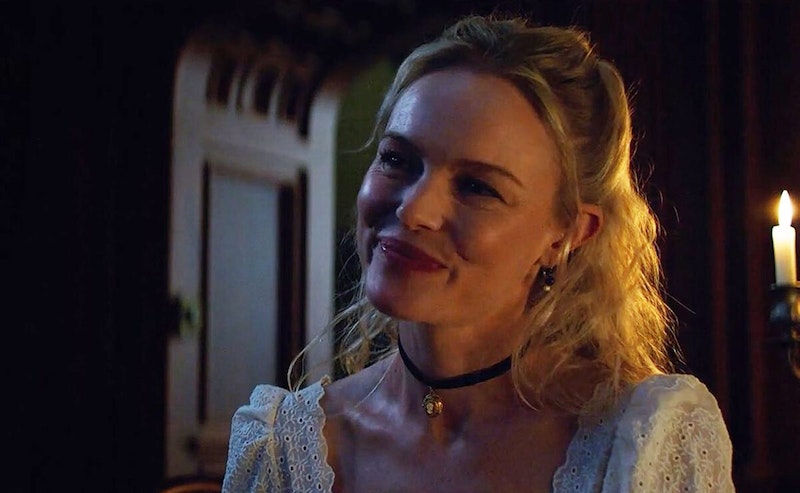 House of Darkness is a talky chamber piece, one of those movies that spends about 80 minutes of its 90-minute running time engaging in buildup. The climax, while not completely unsatisfying, isn't worth the wait. The film, written and directed by 1990s indie cinema bad boy Neil LaBute, has a simple premise: A man and woman (real-life couple Justin Long and Kate Bosworth) have just met at a bar, and he gives her a ride home, with the obvious intention of getting laid. They go inside the woman's abode, which is a massive old gothic castle.

The bulk of the movie consists of banter between the two of them—he thinks he's going to get lucky, she appears to resist, and she drops cryptic hints that she and her family own several of the castles. Eventually, her sister (Gia Grovatin) surprisingly shows up. Throughout, we're meant to question what's going on. Are they going to have sex? Is there some supernatural element at play? Will sudden violence erupt?

While Bosworth, the Blue Crush star, is convincing in her mysterious role, Long is miscast as a bro-like douchebag whose name is "Hap." The former "I'm a Mac" pitchman is a handsome man, but more of a dorky type of handsome than the Barstool-style creature he's supposed to be playing here, and at 44 he's older than the guy should be. (Long is currently earning rave reviews for another new movie, Barbarian.)

Then, the film at one moment suddenly turns into Promising Young Woman, wishing to make a feminist, anti-toxic masculinity statement that isn't earned. It may be in line with the work of a filmmaker who's been exploring that theme for the bulk of his career—even before doing so was fashionable—but it doesn't fit here. Promising Young Woman was messy and made questionable choices, but it was a better version of what House of Darkness was trying to accomplish.

LaBute burst on the scene in the late-1990s with the nasty corporate drama In the Company of Men, and made a follow-up, Your Friends and Neighbors, that was nearly on that level. His work since has been prolific but iffy; the most memorable of them, and not for very good reasons, was the 2006 Nicolas Cage remake of The Wicker Man.

House of Darkness comes out in theaters Friday and lands on VOD four days later; I'm guessing the nondescript title was chosen so as to come up in VOD menu searches for "House of the Dragon."