Jordan Peele’s Get Out Is a Breakout Film

A look at prejudices of Northern, white liberals. A 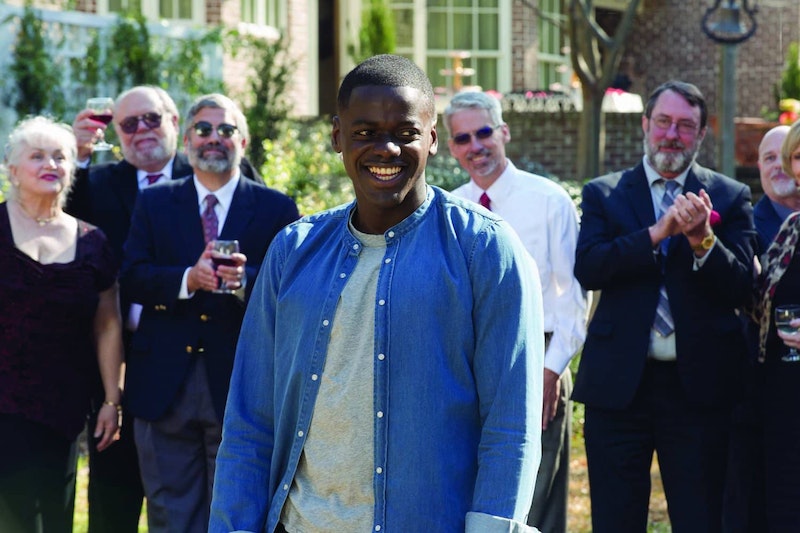 Get Out, the directorial debut of Key & Peele’s Jordan Peele, sets a huge degree of difficulty for itself and passes every test. It’s a biting satire that picks a target and nails it. It's a horror movie with political resonance that never gets preachy or heavy-handed. Its script, coming from a comedy veteran, is occasionally hilarious, and also highly intricate, with numerous throwaway lines paying off down the line. And it gets outstanding performances out of a cast of mostly unknown actors.

Get Out stars British actor Daniel Kaluuya as Chris, a young photographer who accompanies his girlfriend (Girls’ Allison Williams) for a weekend upstate to visit her wealthy parents (Bradley Whitford and Catherine Keener).

The parents are earnest, Obama-loving liberals, but things get spooky pretty quickly, in ways that I wouldn’t dream of spoiling. I will say, though, that the model used here is less “shocking plot twist” than “slow burn leading to revelations that may dawn on you gradually.”

We see traditional horror setpieces, and a lot of scenes of various flavors of creepiness. There’s a pair of black servants (Marcus Henderson and Betty Gabriel) whose personalities are just plain off. There’s Williams’ nightmarish lacrosse bro brother (Caleb Landry Jones), and a group of odd friends (including Stephen Root and Keith Stanfield) who show up for a garden party. Meanwhile, comedian Lil Rel Howley is off to the side as Chris’ buddy, probably the most heroic TSA agent character in movie history.

You may have noticed that you don’t know most of those names. But the cast is uniformly excellent. Kaluuya commands the screen in every scene, while Williams—whose acting on Girls has been mocked for years—has just the right energy for this role. And Whitford and Keener, as the parents, play delightfully against type.

Jordan Peele, one half of Key & Peele, is the sole writer and director. In case you thought his partner Keegan Michael Key, who’s been getting movie roles left and right the last couple of years, was going to be the sole breakout of the two of them, that’s not the case, because Peele has shown himself an immensely talented filmmaker the first time out. He’s not only written a brilliant script, but has mastered film grammar, timing, and the blocking of scenes—while abandoning none of the biting racial satire that was all over Key & Peele. Get Out is vastly superior to Keanu, the mediocre comedy/action parody Key & Peele starred in together last year.

What’s so groundbreaking about Get Out is that it takes square aim not at the overt racism of Southern rednecks, but at the more unexamined prejudices of earnest, Northern white liberals. It’s a “race movie” at the time when there are many others, especially those up for Oscars this week. But Get Out looks, sounds, and feels absolutely nothing like any of them.