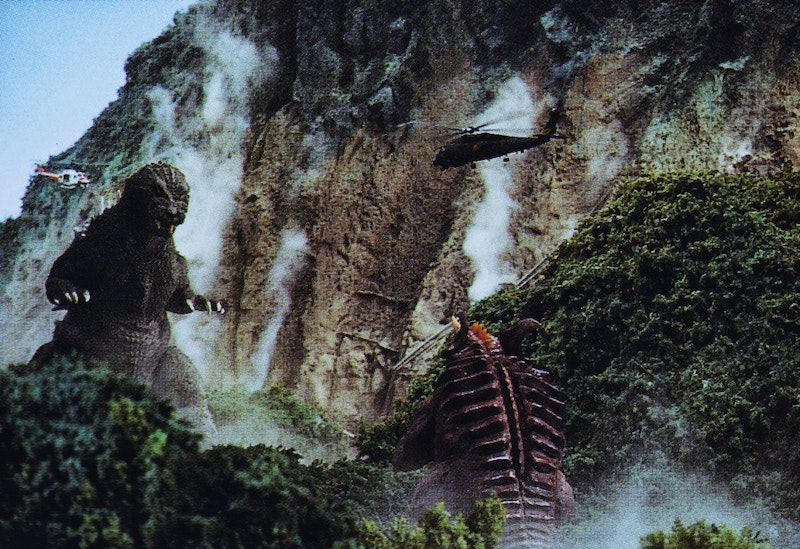 In anticipation of last year's Shin Godzilla, I watched the other 30 Japanese and American films in the franchise. There's a lot of crap you have to wade through, particularly in the Shōwa period. Still, it was a great experience. I moved onto the Gamera trilogy and began jumping back into the Godzilla films. What's the appeal of kaijū ("strange beast") movies for me? At least a minor element is how the genre stokes my anti-speciesist schadenfreude or misanthropy. There's something satisfying, as an animal activist, to see the tables turned, to see some perverted embodiment of nature striking back, destroying a civilization which has established dictatorship over the Earth and its inhabitants.

Of course, as Kim Stallwood points out in a reading drawn from early drafts of Growl, his excellent memoir, misanthropy is not a particularly useful emotion on its own. "The misanthropic bunker is tempting when we live in a world that often seems to be floating in a sea of blood from the slaughter of billions of animals," he said. "Like waves constantly crashing on a beach, we are continuously bombarded with accounts of animal cruelty. We all experience melancholy when we see animal cruelty, but what do we do with these feelings? Learn how to channel them." Absent the ability to defeat humanity through force, which not even Godzilla has fully managed, animal activists must sway human society towards veganism using non-violent means. Still, as I believe Stallwood aknowledges, misanthropy is inevitable and at times therapeutic.

For those unfamiliar with the genre, it might be surprising to learn that kaijū films are often political. The original, 1954 Godzilla film is well known as an overtly anti-nuclear allegory. Godzilla vs. Hedorah, released in 1971, focused on growing environmental concerns, with the King of the Monsters facing off against a creature feeding on pollution. In Godzilla, Mothra, and King Ghidorah: Giant Monsters All-Out Attack, released in 2001, Godzilla is an incarnation of the victims of the Imperial Japanese Army during World War II. Kaijū films seems particularly well-suited to transmitting political or moral messages. Each titanic figure can represent a competing concept.

Sometimes I wish there was a kaijū film which tackled animal-rights themes more explicitly. Perhaps the titular creature would be a broiler chicken given an experimental growth drug which causes it to mutate into monstrous proportions. Or maybe it would be some alien representative of a more advanced, enlightened species, sent to punish humanity for its treatment of fellow Earthlings. The high schooler in me, who obsessively read Syd Field's screenwriting books, would love to make such a film. Of course, like all my madcap ideas, this one is precluded by a lack of necessary funding. Perhaps some day I'll launch a crowdfunding campaign to make a movie like this. Alternatively, if any readers out there have a significant amount of money they're willing to part with to bankroll the project, please get in touch!