Behind the scenes on Singing in the Rain. 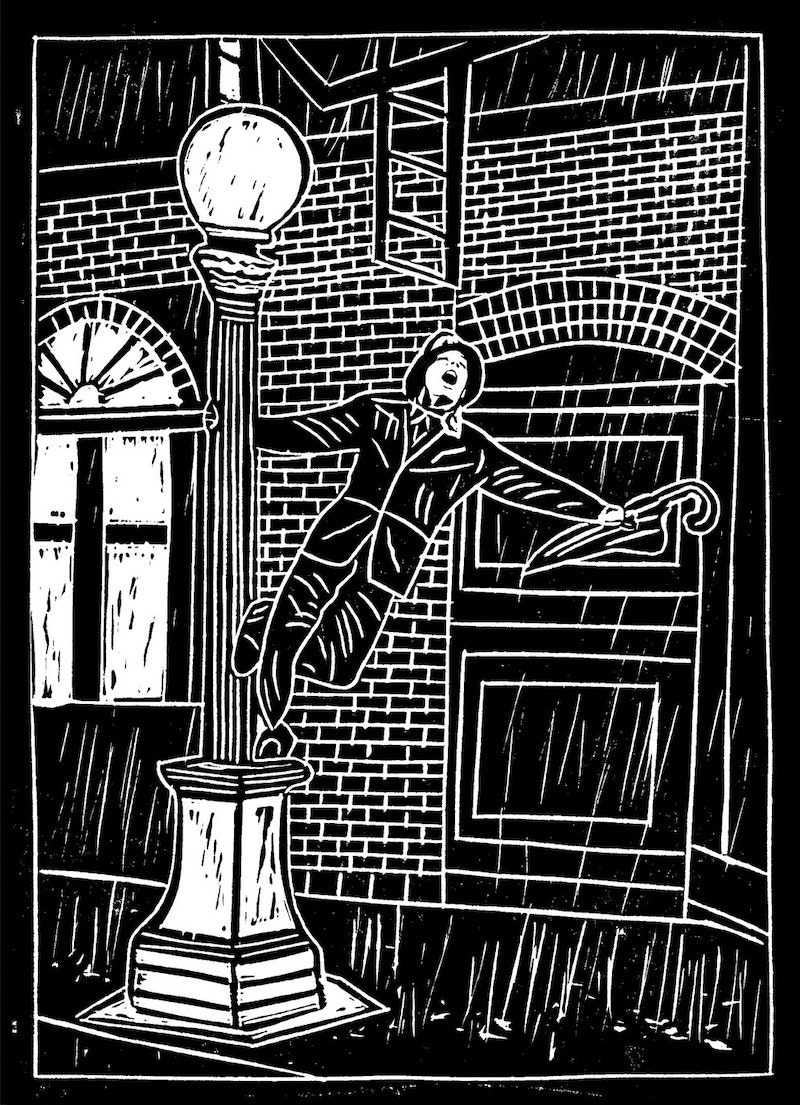 In 1949, the writing team of Betty Comden and Adolph Green walked into the MGM offices of Arthur Freed. Freed, a lyricist and renowned film producer, specialized in movie musicals. He told Comden and Green, “Kids, your next movie is going to be Singin’ in the Rain and it’s going to have all my songs in it.” There was no plot. No characters. Just a bunch of unrelated songs and the notion that one scene would have someone singing while it was raining. Somehow this became the greatest movie musical ever made.

Singin’ in the Rain debuted in 1952. The film offers a comedic depiction of Hollywood’s transition from silent to talkies. Choreographed and directed by Gene Kelly and Stanley Donen, the film stars Kelly, Donald O’Connor, and 18-year-old beauty pageant winner Debbie Reynolds. Reynolds was a gymnast with no dance experience. Kelly was a harsh taskmaster and criticized her dancing skills. One day, Fred Astaire visited the set and found Reynolds crying beneath a piano. He agreed to give her dance lessons. By the time she filmed the “Good Morning” scene, she was able to keep up with Kelly and O’Connor. The 14-hour shooting days caused burst blood vessels in Reynolds’ feet. Years later she said, “The two hardest things I ever did in my life are childbirth and Singin’ in the Rain.”

O’Connor also succumbed to the stress of production. During the “Make ‘Em Laugh” number, he resurrected an old vaudeville routine of running up a wall and completing a somersault. A four-pack-a-day smoker, O’Connor became so debilitated he was hospitalized for exhaustion and severe carpet burns. When an accident destroyed the footage, O’Connor gamely agreed to re-shoot the scene from scratch.

The iconic Singin’ in the Rain number was filmed while Gene Kelly had a 103-degree temperature. The scene took more than two days to shoot and Kelly was constantly soaked, causing his wool suit to shrink. Technicians covered two city blocks on the MGM back lot with a tarp to create darkness for the night scene. Overhead sprays were installed, a potential problem since there was a water shortage in Culver City. During dailies, it was determined the rain did not show up properly on screen. Milk was added to make the rain more visible.

The song “Singin’ in the Rain” appeared six previous times on the big screen. It debuted in The Hollywood Revue of 1929. Jimmy Durante sang the song in Speak Easily (1932) while Judy Garland sang it in Little Nellie Kelly (1940). The song also appeared as a musical sequence in The Babe Ruth Story (1948). In Stanley Kubrick’s A Clockwork Orange (1971), Malcolm McDowell sang the song during a controversial rape scene. Gene Kelly was so incensed, he deliberately ignored McDowell at the 1972 Academy Awards.

Donald O’Connor said he disliked working with Kelly since Kelly was a bit of a tyrant. Reynolds wrote that Kelly “was a perfectionist and a disciplinarian” but he was also “the most exciting director I’ve ever worked for.” Kelly later admitted he’d been grouchy and ill-mannered on set. But he claimed this was all an act to get the studio to release him from his contract. MGM finally obliged in 1954.

Singin’ in the Rain was initially released in 1951 but was pulled from theaters so it didn’t compete with An American in Paris, also starring Kelly. The film had a modest box office gross but was not nominated for Best Picture. Over the years, Singin’ in the Rain became influential among modern filmmakers. Francois Truffaut and Alain Resnais both listed the movie as their favorite. The 2011 Best Picture The Artist was clearly influenced by Singin’ in the Rain as was La La Land. Ryan Gosling said, “We watched Singin’ in the Rain everyday for inspiration.”

The network television premiere of the film was scheduled for November 23, 1963. It was postponed two weeks due to the assassination of President Kennedy. The original negative of the film was destroyed in a fire. In 2007, the American Film Institute declared the movie the “#5 Greatest Film of all time.”