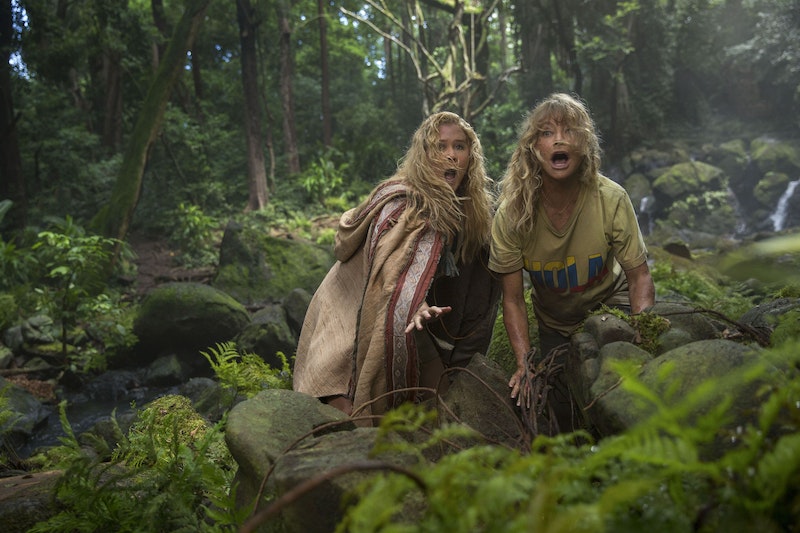 Are we nearing the end of the Amy Schumer Epoch? As recently as 18 months ago, Schumer was riding high from a near-perfect third season of her Comedy Central show Inside Amy Schumer—featuring that classic parody of 12 Angry Men—as well as the successful movie Trainwreck. She was on magazine covers, selling out arenas on her stand-up tour, and wrote a book that was a #1 New York Times bestseller.

More recently? Yikes. The fourth season of the Comedy Central show was lackluster, while a series of social media missteps alienated Schumer from both the woke crowd and conservatives. Nobody much liked her recent Netflix stand-up special. And major national ad campaigns featuring Schumer were quickly abandoned by Bud Light and Old Navy (disclosure—my sister had a hand in producing the latter).

The new comedy Snatched may mark a new low for Schumer. It takes her usual on-screen persona and plugs it into a witless high-concept comedy in which all the plot developments and most of the jokes are telegraphed well in advance. It’s an all-around failure that spoils Goldie Hawn’s return to the screen after a 15-year absence.

At its best, the Comedy Central show takes Schumer’s usual character—a dim, hard-drinking, out-of-control party girl—and uses it to make satirical points about everything from politics to sexism to body image issues. Trainwreck, of which Schumer was the sole writer, was partly such a success because it gave a female-driven twist to director Judd Apatow’s usual formula of an overgrown child coming to terms with adulthood, and the Schumer and Apatow sensibilities proved a good match.

Snatched, on the other hand, oozes mediocrity. Schumer, once again, plays up to her usual persona, a drunken disaster incapable of handling a steady job, a boyfriend, or friends. Unable to get anyone to join her on a planned vacation to Ecuador, she brings along her worrywart mother (Hawn, in her first on-screen role since The Banger Sisters in 2002).

They’re soon, of course, kidnapped, and wind up on the run from the least convincing, least-menacing “Colombian drug cartel” in the history of movies. There’s a lot of Roger Ebert’s old “Fallacy of the Talking Killer” trope, and if you thought it was implausible when Walter White outwitted the experienced drug lords every single time, that was nothing.

Snatched is far too dependent on the expectation of laughs that are either obvious or never arrive at all. There’s also an over-reliance on physical comedy and gross-out gags that aren’t nearly as hilarious as the filmmakers think. There are numerous errors of plausibility and continuity, starting with, wouldn’t the disappearance of two attractive white American women in South America draw a bit more attention from the government and media? Don’t they remember the Natalee Holloway case?

The mother-daughter stuff is clichéd, which is doubly disappointing since Schumer wrote much more affectingly about her oft-fraught, and much more interesting, relationship with her own mother in her book last year. It’s great to have Hawn back in the movies. But the writers (Schumer and two others) give her a nothing character.

There’s one small section of the film that actually delivers laughs, and that’s a wonderful little supporting role by Christopher Meloni as an adventure guide in the Amazonian jungle. In the Wet Hot American Summer tradition, Meloni is off in his own, much funnier little movie. But once Meloni exits, it’s back to mediocrity.

I wish the rest of the supporting cast could keep up. Ike Barinholtz plays Schumer’s brother, but as usual with that actor, a little bit of him goes a long way. Meanwhile, Wanda Sykes and Joan Cusack play friendly faces with special forces training, although Cusack’s character—borrowing a page from the Ellen James Society in The World According to Garp—has cut out her own tongue and therefore doesn’t speak (she does parkour instead, or rather, her stunt double does).

It's one of those movies that's only 90 minutes long but still drags throughout. And not to get Schumer in trouble with Woke Twitter yet again, this is yet another film in which white Americans go to a third world country, and every native’s lone function is either to serve them, or try to kill them. Snatched was directed by Jonathan Levine, who made a little-seen gem of an indie film called The Wackness back in 2008, and has more recently become more of a house director for the Seth Rogen/Joseph Gordon-Levitt team (he directed both 50/50 and The Night Before).

Can Amy Schumer recover from her recent career slump? She's talented enough that it's possible. But it might be time for her to switch up her persona a bit, and choose a better project.

King Arthur: The Legend of the Sword is deathly boring. C-

With his new King Arthur: The Legend of the Sword, director Guy Ritchie does what he did to the Sherlock Holmes legend in two earlier movies: takes mythical source material that’s spawned dozens of great stories, and makes it deathly boring, while wasting Jude Law as the second lead.

A King Arthur origin story via Westeros, Ritchie’s film is a two-hour slog with an expository dialogue-to-action ratio that’s uncomfortably high. Legend of the Sword has a tone that’s all over the map, occasionally dropping in humor where it mostly doesn’t belong. And both aesthetically and thematically, Legend of the Sword owes more to Game of Thrones than any previous itineration of Arthurian legend.

Whole shots are borrowed from both the series and the opening credits; one scene seems lifted directly from the famous “Battle of Blackwater” episode. Littlefinger (Aiden Gillen) even has a supporting part, as one of the Knights of the Roundtable. Charlie Hunnam plays King Arthur-as-Jon Snow, a “bastard” son of the previous king whose mother and father were both murdered by his uncle. (Law interrupts a recent strong run of roles with a turn consisting mostly of luxurious overacting.)

Meanwhile, Astrid Bergès-Frisbey plays a sorceress and is, if I’m not mistaken, the movie’s only female character with a speaking part who doesn’t get viciously murdered on screen. Unless you count that one octopus-like creature with the heads of human women. The film is just ugly. Action scenes are choppy and confusing, with characters continually disappearing into the darkness. Magic pops up occasionally, depending on the needs of the plot.

Do not see King Arthur: Legend of the Sword. Instead, watch the real thing on HBO Now. Or see a more faithful, entertaining version of the King Arthur legend, like Monty Python and the Holy Grail.