Black Widow is refreshing because it's the first Marvel film in years that feels like a pure action-adventure movie. A- 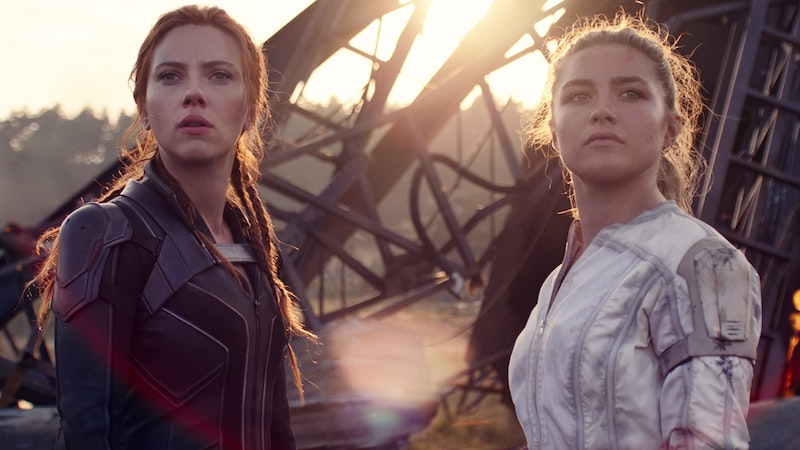 The Marvel Cinematic Universe movies always have plenty of action, but they're not really "action movies." They have higher priorities than that, whether it's explaining superpowers, exploring character dynamics, or connecting the movie's story to that of the previous or succeeding Marvel movies.

What’s refreshing about Black Widow is that it's the first Marvel movie in years that feels like a pure action-adventure movie. Cate Shortland, the relatively obscure Australian director, capably directs the action, and while there's plenty of plot and exposition, none of it really gets in the way.

The action, in the tradition of the James Bond and Mission: Impossible franchises, jumps all over the globe. And the ending is another Marvel third act battle that ends with a Giant Collapsing Thing in the Sky, although this one is staged much better than most. Black Widow, which arrives July 7 both in theaters and as part of the Disney+ "Premiere Access" VOD scheme, is nearly a complete triumph, thanks to that strong action, as well as perfect casting of the main supporting roles. It's also a standalone story, one free of cameos from outside superheroes who arrive to set up the plot of the next movie.

The new movie was delayed due to the pandemic. But really, it was delayed even longer than that, to the point that it's arriving more than two years after its main character died in the main series. After starring in seven different Marvel movies, none of which were focused on her character specifically, Scarlett Johansson's Natasha Romanoff/Black Widow, was killed off in 2019's Avengers: Endgame, sacrificing herself to save her friends and the world. And unlike so many in the genre and even that specific movie, this wasn't one of those deaths that was temporary or easily reversed.

The new Black Widow film is set around 2016, following the events of Captain America: Civil War. The Avengers were at odds with one another, Thanos hadn't yet moved to kill off half the world's population and Black Widow was still alive. The new movie not only is set five years ago, but there's little about it that wouldn't have made sense if it had been made five years ago. Black Widow isn't exactly the character's origin story; we already got a lot of that in her appearances in the previous movies: We know that Natasha Romanoff was trained as a Russian secret agent in a brutal academy called the Red Room, that she was sterilized at a young age, and that she eventually defected and joined the good guys of S.H.I.E.L.D.

We get more backstory here. It turns out Natasha lived in the U.S. as a child, as part of a The Americans-like plan in which her parents (David Harbour and Rachel Weisz) lived in Ohio as Soviet spies disguised as Americans. The film, set during a lull in the Avengers' adventures, reunites Natasha with her sister, Yelena (a very game Florence Pugh), first putting them at odds but later teaming them up. Later they're paired with their parents, in order to topple the Red Room (in the person of a Russian oligarch supervillain played by Ray Winstone) once and for all. Winstone's baddie is assisted by a mysterious fighter known as The Taskmaster, who borrowed various costume and fighting elements from the different Avengers.

Pugh is a natural in the role of the sister, pulling off a believable Russian accent and acquitting herself well in the fight scenes. Every indication is she'll be appearing regularly in Marvel movies going forward, although I hope that doesn't mean she'll be doing less of the sort of indie work that she's so great at.

David Harbour plays the movie's best character, an aging superhero gone to seed. He was once The Red Guardian, a Soviet answer to Captain America, but became resentful that he had to be a spy instead—even before he was sent to a Russian prison. The mapping of Avengers history on to Cold War politics is something that came up in the Captain America movies, and I'd love to see future MCU movies tackle a lot more. Rachel Weisz fits perfectly as a character who’s full of surprises. As for Ray Winstone, who doesn't get cast nearly enough these days, he plays a fun villain role, even if he doesn't get to speak until the third act is well underway.

Black Widow, due to its multiple pandemic-related delays, is the first new Marvel Cinematic Universe movie since Spider-man: Far From Home, in the summer of 2019, although Marvel fans have had three different Disney+ shows to tide them over. But the drought is over—Black Widow is the first of four MCU movies arriving this year, followed by four more in 2022. If Black Widow ends up the best of the eight, I won't be shocked.