Smooth Talk (1985) is a bracing adaptation of the Joyce Carol Oates story “Where Are You Going, Where Have You Been?” 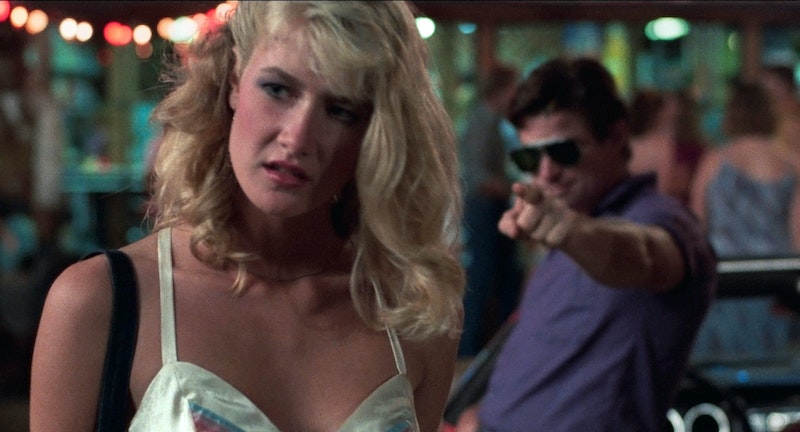 The line between eros and violence becomes blurred in Joyce Chopra’s brilliant depiction of teenage love in Smooth Talk (1985), an adaptation of an equally brilliant Joyce Carol Oates 1966 short story, “Where Are You Going, Where Have You Been?” Oates was inspired by a real murder, and the story follows the same ending. Chopra, however, chooses to leave us with a sense of ambiguity, and this is what makes her film incredibly impactful.

She dresses in provocative clothes, and leads young men into thinking that she’ll “go all the way.” But in all of the instances, she gets frightened and the female sexual bravado disappears. Anxiety over the unknown and the feeling of what might come afterwards is too overwhelming for Connie. Still, this doesn’t deter her from that mad teenage, female desire, and she continues to act seemingly out of control.

Connie has a very tense relationship with her mother, Katherine (Mary Kay Place). They don’t like each other, and Katherine prefers Connie’s sister, who behaves properly, and doesn’t cause any trouble. Connie’s distance from her family is amplified through the relationship with her mother, who’s stuck between hating her daughter’s emerging sexuality and loving her because she’s her child.

Life changes forever when Connie encounters Arnold Friend (Treat Williams), who’s most likely twice Connie’s age. Arnold somehow knows everything about Connie: who her friends are, what her parents are doing, and the fact that Connie’s alone in the house. Arnold appears out of nowhere, and Connie’s intrigued. She thinks that this is a usual male/female dance, which she can’t fully understand anyway. She leans on his car, she walks seductively, she tries to find out something more about this stranger who knows everything about her. What she doesn’t understand is that Arnold is establishing power. Laura Dern shows emotional maturity and range, which we also see in the following performance in David Lynch’s Blue Velvet (1986).

Arnold oscillates between a grown man in full possession of his masculinity, and a teenage boy coming to terms with his own sexuality. But this in-between state is never really clarified because his main purpose is to establish power over Connie. Just as his 1950s persona is out of touch with contemporary time, so is his masculinity and boyishness. We know that Arnold is not a friend, regardless of his gentle actions. Connie is still not sure.

Connie can’t seem to recognize herself, but Arnold assures her that he knows her better than she knows herself. He leans into her just enough without touching her: “I know my Connie. I’ve been watching you.” The game intensifies and both Connie and Arnold exist in another reality separated from everything that is familiar, especially to Connie. She tries to hold onto being a little girl by entering back into the house and calling her mother: “Mommy! Mommy!” she cries, but Arnold knows better what’s good for her.

Connie’s free will takes on a different form as she leaves the home and enters into Arnold’s car. He takes the car into an unknown location, and Chopra continues the element of ambiguity by only showing Arnold’s empty car in the middle of an overgrown meadow. We can’t see or hear Connie and Arnold. This adds to the power of the erotic because we don’t know whether Connie has been raped. What makes this film morally difficult is the precedence that the aesthetically-led eros takes. It calls us to make a decision: is Arnold a rapist and a pervert, or is he a lover? What is the distance between violence and eros? By nature, sex is violent but who’s in control of this violence? A man or a woman?

Connie’s driven back home, clearly a changed person. She’s no longer a girl but a woman. But what kind of woman? Scarred? Mature? Has she been touched by evil or by a transition into a woman’s sexuality? It is Connie who gains power in the end, even for a moment. “I don’t want to see you here again. Ever. Understand?” she says to Arnold. But even this is ambiguous—she’s not sure whether what she’s saying is authentic and real, and Arnold just smiles, as if he finds newly found free will amusing and cute. Will she choose to remember this? After all of this, the question is essentially metaphysical: where is Connie going, where has she been?