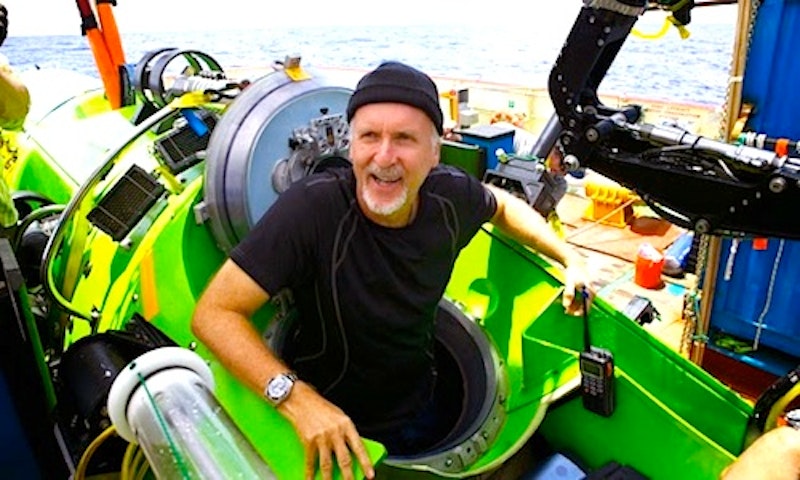 At one time or another, we’re all wont to imagine what we’d do if we happened to earn or receive an unfathomable degree of wealth and power—the dreams we’d chase, the wrongs we’d right, the empires we’d build, the monuments to ego we’d erect. Of course, the world is full of examples of how not to live the high life: the lonely suicides, descents into addiction and mania, the abdication of self-responsibility to cult programming and segues into politics. Given the above, it’s downright refreshing when someone who’s spent most of his adult life breathing that rarified air pours his free time and energy and cash reserves into, of all things, undersea exploration.

If you can get beyond that, you’re in for a treat. The movie, co-directed by John Bruno, Andrew Wight, and Ray Quint, with Cameron acting as producer, tracks the finalization, extended testing, and ultimate deployment of the Deepsea Challenger in 2012, in Australia. There’s some project management drama here in the stretching and busting of timelines, a high-level view of problem solving, stresses, weather bothers, and some muted human drama. All of the above sets the scene for what it is that makes Deepsea Challenge so eminently fascinating: the sprawling, wondrous ocean itself, in luminous, eye-popping 3D. I saw this with my mom and my son, and we were all blown away.

To watch thousands of spawning or schooling creatures—unidentified, but pale white, crustacean-like—teeming on the floor of one trench is awe-inspiring. To watch thick, black tendrils of smoke rise through coral pillars is astounding, or the odd iridescent jellyfish, or even just black-suited divers clustered around the submersible, preparing it for descent. Thousands upon thousands of feet below sea level, flipping switches or adjusting levers as flood lights illuminate the gloom—the roiling sand disturbed by each touch-down always put me in mind of the moon—the unalloyed glee of discovery in Cameron’s eyes is infectious, as is his endless curiosity and enthusiasm, even when the robotic arm fails or undersea pressure busts some sensor.

There is a scene, late in the movie, where his activities in the submersible are fast-forwarded into a montage blur, a catalogue of protocols one suspects is part scientific necessity, part psychological imperative. In that moment, we don’t envy the position he’s placed himself in, but we realize: who better to sit there, and who better to help unlock a portal into an underexplored corner of the world that most of us will never see with our own two eyes? The best part? If you bought a ticket to Terminator 2, Avatar, or The Abyss, you probably helped bankroll this.