Pitched as a sci-fi revenge fantasy, Lucy is actually an expensive evolution lesson. 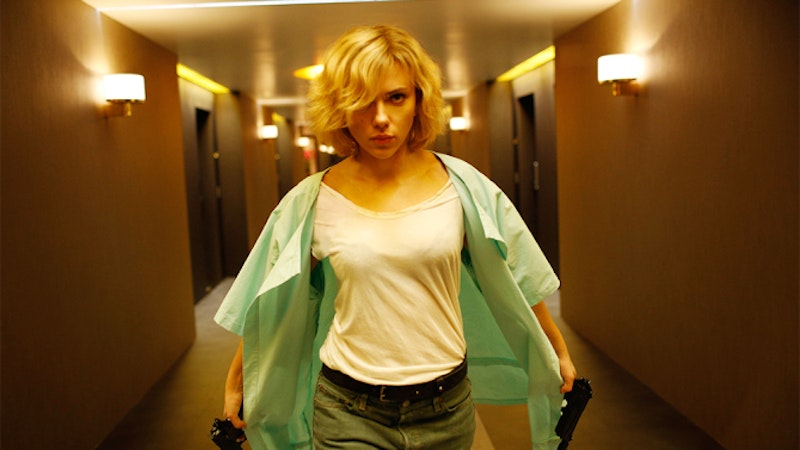 Lucy is a Luc Besson-directed flick in which an American party girl in Taipei named “Lucy” (Scarlett Johansson), with questionable taste in acquaintances, gets press-ganged into service as a drug mule, but then the drugs that were surgically implanted in her stomach leak, granting her, overtime, access to 100 percent of her brain capacity. Quickly and improbably, she’s transformed from a cowering victim into a more-human-than-human.

Morgan Freeman and Amr Waked are on hand as expository Magic Negro and representation of benevolent humanity, respectively. Lucy is a frustrating movie on a number of levels, because a) it’s not at all the revenge epic its trailers advertised, b) it moves too quickly to be satisfying, c) it asks too much, cerebrally, of an audience so ready and willing to invest in a reverse victim-culture narrative, and d) it’s exhausting incomprehensibility guarantees repeat business. No wonder it found funding; no wonder it’s more than doubled its budget already, despite being less satisfying than the much-derided Transcendence, which exceeds this film in thrills but had a much lamer ending.

There’s still some fun to be had here. Johansson’s struggle to adjust to quasi-omniscience is good for several belly laughs, and the post Bourne Identity/Matrix moments of self-discovery feel fresh when viewed through her wide, blue eyes. Savor every moment in which she immobilizes or maims rent-a-thugs or is objectified by them, because there aren’t enough. From jump, Besson is the obstacle here—shuffling nature scenes and Nat Geo bullshit into the deck, breaking up the movie with percentage-of-brain-power title cards, and going so full gonzo in the last third that it’s easy to actively despise everything going on even as you don’t totally grasp it. Am I saying that I wish this movie were more violent, more predictable, more conventional, more mainstream? I guess, yes. I am saying that—at the risk of drawing the ire of my younger, more idealistic self: the self that couldn’t understand why all entertainments weren’t brainy and probing and capable of Raising Big Questions intended to keep viewers up all night. Then again, maybe this disappointment has nothing to do with me, or with Besson; maybe we should just blame whoever was behind the bait-and-switch ad campaign for this movie.