Calvary is another unique and impressive film from John Michael McDonagh. 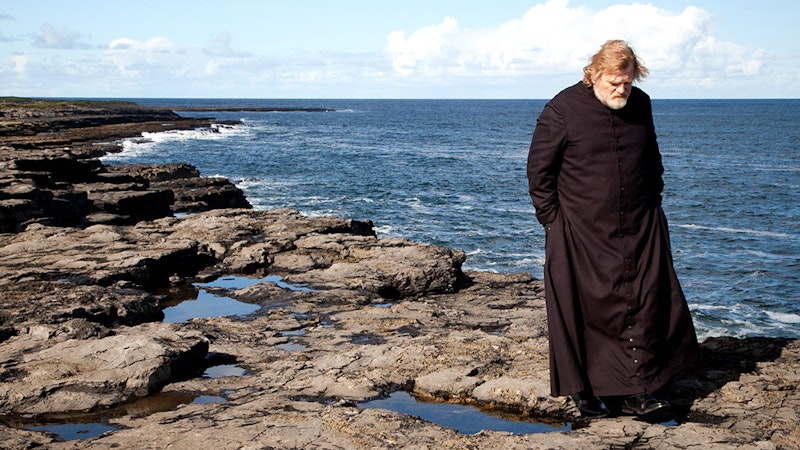 Finally! Good omens for the future, at least in film. I’ve honked over and over again like a busted alarm clock about the lack of writers/directors with any style or personality working today, though to be fair I haven’t been digging to find the gold that isn't distributed here in Baltimore or D.C. Films have surrendered to television’s dependence on narrative and workman-like execution. Both can and should exist, but filmmakers whose work is more than just a few mini-series episodes are a rare breed. John Michael McDonagh is on that list. I loved his first movie, 2011’s The Guard, for its tar-black humor and the sort of creative and rhythmic editing and cinematography that's as essential as the performances. It's embarrassing and demoralizing that the only reference points I can dredge up are Tarantino and MTV—Death to Smoochy too. Grim realism at top speed, that feeling when a movie takes you over, dominates you.

There’s a moment in McDonagh’s new film, Calvary: a character makes a comment about Brendan Gleeson’s “quick wit” and before that last “t” is even fully pronounced McDonagh smash cuts to an extreme close up of beef being butchered—THWACK! To me, that’s the fundamental difference between movie attitude and TV attitude. Television is designed to please and pacify the audience, to get them hooked so they tune in next week or keep watching the queue. Movies have roughly 90-160 minutes to make a stamp on your mind and leave you thinking about it for days, months, years. Too few filmmakers are making movies that stay with you for more than a couple hours, and even fewer try to take control of the viewer, even if it makes them uncomfortable or think too hard.

Anyway, Calvary: McDonagh’s second effort as a writer/director again stars Brendan Gleeson, this time as a righteous priest in Ireland tormented by the creeps, sickos, and victims of the church he dedicated himself to after his wife passed away. Opening scene: a close-up on Gleeson’s face in a confessional, as the voice in the adjacent booth tells him blankly he’ll be dead in a week. The disembodied voice goes into detail about how he was clandestinely raped for years by a now-deceased priest, and that Gleeson—by all accounts completely virtuous—will be murdered as vengeance, because he’s “a good priest.” We follow Gleeson as he spends the last week of his life essentially tying up loose ends, watching with quiet resignation as the little corner of the world he's carved for himself crumbles around him; his church is burned to the ground, his dog’s throat is slit, and he sees all of his friends and acquaintances for what they are: deeply flawed, self-hating, and without a clue. The church hasn’t helped any of them, yet Gleeson defends its virtue in spite of his own doubts, accepting his own cold-blooded murder on a windy beach as penance for the sick pretzel-logic of his parish and humanity at large. Ohhh boy. This is one that needs two, three viewings, I’m happy to say. Rush out and see Calvary now while you still can.