It’s Not the End of the World, Until It Is

On The Rover (2014), from writer/director David Michôd. 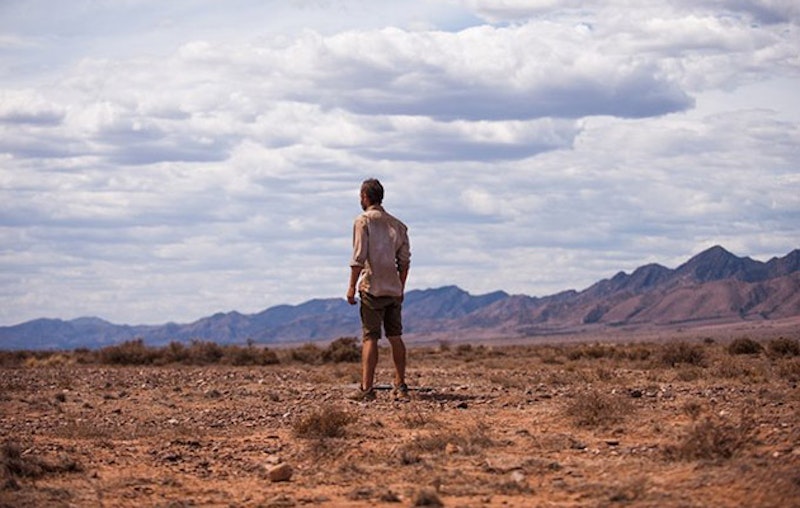 In the late going of The Rover, Reynolds (Robert Pattinson) sits in the cab of a pick-up truck, sobbing alone; it’s late at night, and he’s mumbling along to Keri Hilson’s “Pretty Girl Rock,” probably on a CD. This scene is both ridiculous and sad. It’s ridiculous because the truck is the property of Reynolds’ older brother and his harrier friends, and it’s impossible to imagine those dudes having the time for anything that fluffy. (Thrash metal would probably make more sense.) It’s sad because The Rover takes place in a nightmare future Australia a decade after the plummet of the global economy, meaning that for anybody who’s actually left alive, survival takes precedence over frivolously attitudinal pop. Director David Michôd creates an uncertain, sun-bleached world where something as relatively prosaic as a passing train hums with ominous portent, where you’re as likely to see next week as wind up dead from a gunshot wound to the head or via crucifixion. Reynolds meets hardened ex-soldier Eric (Guy Pearce) in an unusual way; when Reynolds’ brother and his friends crash their truck after an unexplained encounter where they leave Reynolds behind, believing him dead, they steal Eric’s sedan. Eric pursues, encountering the wounded Reynolds and ensuring his return to wellness so he can help him find and recover the car.

A rather threadbare plot, admittedly, but what The Rover lacks in complexity—or contextual causality—it makes up for in atmosphere and ennui: the resignation suffusing everything; the offhanded assassinations; how grimy and pre-cancerous and bed-headed and doomed everyone is; the outback seeming, gradually, to subsume society at large. The mindset of this milieu becomes a puzzle that’s difficult to solve. For instance, at one point a house full of men were ambushed while asleep, and I struggled to figure out why they wouldn’t have had one man stand guard. My conclusion was that they were beyond the point of worrying or caring, which makes Eric’s quest for his car stand out in context. That’s the throughline, sure, but the meat of the story is the relationship between Eric and Reynolds. Reynolds is a slow but trusting, while Eric is a single-minded, slightly lunatic loner, and at some point—it’s difficult to say when exactly—they transition from a captor/captive dynamic to equals of a sort, even as the madness and randomness of the nightmare they call reality deepens.