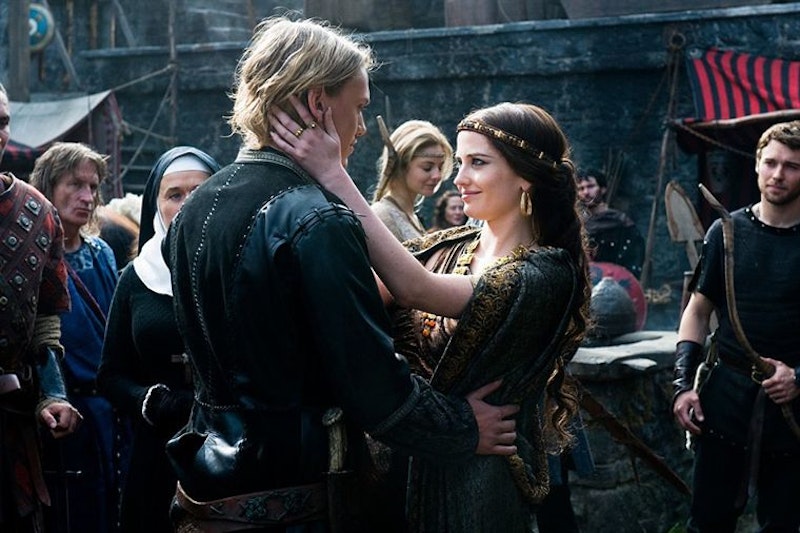 Pulp. If orange juice is any guide, some people want lots of it, a few want a dash of it, and the rest want none at all.

The same might be said for television. Pulp juiced up ratings HBO's True Blood and CW's Vampire Diaries. It worked for Starz's Spartacus too, and maybe that's why I tasted traces of it in the network's next big show, Camelot, whose first episode recently debuted online for a limited preview (thanks Clicker!).

Camelot, though, wants it both ways: the pleasure of pulp with the critical praise of high drama. Before taking in Camelot, it might remind you of the period dramas of HBO (Rome, Game of Thrones) and Showtime (The Tudors). But as you watch, you can taste faint hints of Starzy pulp. What's the problem? Pulp in television is best served in high doses—it should be exaggerated and rarely serious. Anything between full-on excess and spartan seriousness reeks of ineptitude.

Camelot tells the story of the rise of King Arthur, with the help of Merlin (hey, this isn't new!). In the first episode, Arthur discovers he is next in line for the throne of his recently murdered father, King Uther, much to the ire of his stepsister, Morgan (the always delightful Eva Green) and a few other dark souls, many of whom I suspect will be dead soon. Parts of episode one are delightful. We see a little bit of magic, both dark and virtuous, and some nice character acting, mostly from Eva Green, in a role she must have been born to play because she's played it so many times. As we've come to expect from pay cable, the sets and cinematography are all quite nice.

The problems with Camelot are manifold. Like Spartacus, it seems eager to please viewers who like their cable dramas with lots of sex and violence—especially sex, as I counted three sets of boobs and a pair of male buttocks. It also is delightfully cheap in places. There's plenty of near-campy acting, pulpy moments and odd narrative turns, for instance:

1) When evil sister Morgan sees her angelic brother Arthur for the first time, she silently walks around him in a circle—"scoping him out"—and, at the end, sniffs, as if trying to smell his flaws. Didn't I see this move on Saturday morning TV as a kid?

2) At the end of the episode, during a big confrontation between good (Arthur and his army) and evil (Morgan, her lover, King Lot, and their army), Lot cracks a joke about the cherubic Arthur: "Speak up you beardless bastard!" What's wrong with a joke? Well, mere minutes later we find out Lot has the body of his slain eldest son—slain by Arthur!—waiting in the wings. So: he's joking around when he knows his son is dead and the body is 10 feet away?

3) Earlier in the episode, Merlin introduces Arthur to Camelot, a run-down castle in the middle of nowhere. Then Merlin presents Arthur with a small army that was once devoted to Arthur's dead daddy and have apparently been hanging out in the middle of nowhere waiting for Arthur. What's wrong? Only after evil sister Morgan shows up does Merlin reveal Arthur's mother—Queen Igraine, who he hasn't ever met!—is also hanging around Camelot! She just shows up: "Hey!" Why didn't Merlin, I don't know, lead with the long-lost mother, not a band of random soldiers? Why was she just waiting behind a curtain?

Beyond the little stuff, Camelot suffers from a moral clarity that goes against the tent poles of serialized TV—from Mad Men and Boardwalk Empire to The Walking Dead and even True Blood. Arthur is good and Morgan is Evil. Merlin looks a little shady but so far seems like the good wizard we're accustomed to.

Starz may want to be the place for pulp, where heroes and villains duke it out interrupted only by sex and violence; a fine marketing position as even Cinemax enters the scripted show game. But it should remember that good shows on cable spotlight the writing first, then the acting, then the stuff you can't see on network TV. If it has any hopes of competing with HBO and Showtime for paying viewers and critical attention, it is going to have to up its game and take a Sopranos-sized risk.