Allen paints New York as a magnificent source of innumerable events that randomly collide with the lives of the two protagonists. 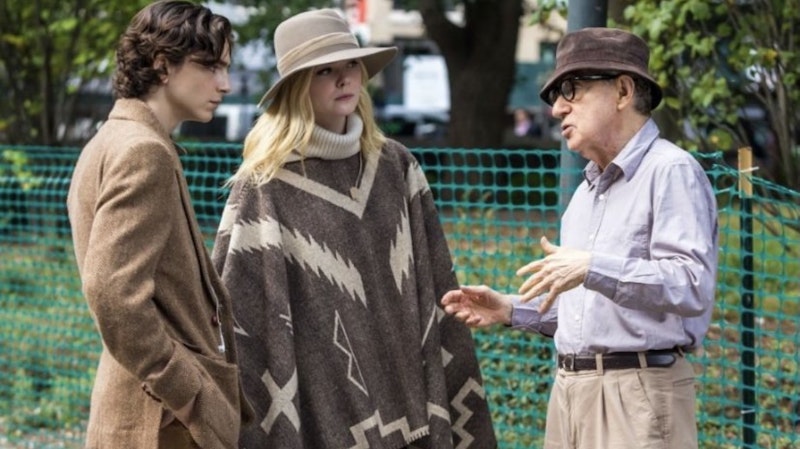 At the end of 2019, I was lucky enough to watch one of the latest Woody Allen film at the cinema: A Rainy Day in New York.

The protagonists of the comedy are Gatsby and Ashleigh—played by Timothée Chalamet and Elle Fanning: a couple of students in love attending the fictional Yardley College. One day, since Ashleigh got the chance to meet a notorious filmmaker in New York, Gatsby decides to accompany her. As he was born and raised in New York, he plans to take the opportunity to show her around the city.

This is the architecture typical of Allen. There’s an initial, quiet and unquestioned situation of equilibrium, in which the protagonists look serene and happy. The two lovers live peacefully in a small village. At some point however, a random event steps in. This event carries no special meaning, but it irremediably breaks apart the existing steadiness, leading to a subsequent chain of unexpected events.

As an exemplifying metaphor, consider the following scene. Drops of water, of the same dimensions, fall into a glass, coming from different directions and with variable angles. The glass is a human being, and every new drop is a life experience. The situation inside the glass is in equilibrium; meaning that the water is well-confined in the receptacle, and we can predict it won’t jump out of it. Nothing changes to the body of water, which remains immobile and unperturbed in the glass. But the time comes when the addition of a new drop exceeds the volume of liquid that the glass can hold. The water begins to overflow, first along the external surface of the glass, and then onto the floor. Its behavior is now unpredictable.

A common definition of chaos is “a state of total confusion with no order,” as if it was a condition in which nothing that works can be found, as if humanity necessarily needed a structure in the world to see it functioning. As I have described elsewhere, each individual lives in a transient, human-created order—that is subject to historical contingency. Although structures are useful for the functioning of communities, most of them, passively taken up by the minds of children, tend to “crystalize” a way of thinking. This process assigns a pre-conceived order to their mind, before they can experience reality in their own way. This is the culture’s Sword of Damocles. However, the truth is that reality exists even in the absence of such human biased structures. Reality is chaotic, indomitable and frightful. Accessing this primordial dimension is the only way to authenticity.

In this context, Allen paints New York as a magnificent source of innumerable events that randomly collide with the lives of the two protagonists, directly challenging the pre-conceived structures in which their existence and beliefs are grounded. Given that the city is so vast and populated, it’s physically impossible not to step into unprecedented experiences. The randomness of these experiences inevitably drifts the two protagonists apart, guiding them to self-discovery. When they first arrive together in New York, the chaos of the city separates them with strength and harshness, in a way that disorients them. But collision after collision, they soon take charge of their solitary behavior, which acquires a novel meaning.They find their coherent way, as they learn, progressively but spontaneously, from their own experiences.

All of this sounds counterintuitive for the audience who, with the opening of the movie, are instead persuaded that the trip will be the perfect occasion for the lovers to deepen their apparently solid relationship. But New York soon reveals the true, tacit inclinations of the two protagonists, and their real nature.

Ashleigh was born a journalist. We—and she—understand it phenomenologically, simply by looking at how she indulges one event after the other, at first passively, but then with energy and simplicity. Her character being so spontaneous and naive reminds us of the summer mosquito headed towards the lights: for her, New York’s now the city of headlights, the place where she can follow the trail, and be the protagonist of improbable scoops. Her mind is attracted by sensational news, by the superficial glamour of celebrities.

Gatsby is different. He was born and raised with “a bad destiny,” the feeling that your life is guided by someone else. The result is that none of his actions define him, as if a sort of negative filling was constantly emptying him. This sense of emptiness is greeted by the large, nocturnal avenues of New York, where he experiences the vagueness of his own existence. Gatsby is the modern wanderer, who knows how to elegantly play the piano without getting a penny out of it, and knows how to win money at poker without understanding how to spend it. His mind seeks a final resolution, for what we could call “un-commodified meaning”: the utopian dream of pursuing an activity without seeing its purpose materialize.

While New York meekly reveals the two protagonists for who they truly are, it inevitably drifts their spirits apart.

What do we learn from this story?

For once in the artistic panorama, the pragmatism of Allen’s architecture wins over psychologism. Culturally, we’re often taught that we should sit down, better if alone, and reflect upon our lives. According to this vision, the best way to find our true vocation would be to do nothing. We should comfortably stay within the barrier of our twisted minds, and wait: wait for a divine illumination and then reflect upon it. Pragmatism is grounded in experience. Instead of remaining motionless, we should simply act, and analyze the consequences of our random behavior, which is now observable and quantifiable. Pragmatism moves us away from a state of psychological, metaphysical immobilism. Or, as phrased by Professor Douglas McDermid: “For Dewey, Peirce, and like-minded pragmatists, knowledge (or warranted assertion) is the product of inquiry, a problem-solving process by means of which we move from doubt to belief. Inquiry, however, cannot proceed effectively unless we experiment—that is, manipulate or change reality in certain ways. Since knowledge thus grows through our attempts to push the world around (and see what happens as a result), it follows that knowers as such must be agents.”

In this direction, looking for a place that offers the greatest amount of inputs—our “New York”—is the perfect gateway toexplore an empirical method of self-investigation, and therefore to find a road to happiness.

Pragmatism also helps to investigate and perhaps defeat certain distorted mental attitudes. Above all, it sheds some light on the true meaning of the word “luck.” Luck is defined as “the force that causes things, especially good things, to happen to you by chance, and not as a result of your own efforts or abilities.”

How does this definition fit into our model? The person who believes in the existence of luck, also thinks that it’s sufficient to try “once” in order to succeed because—according to the rhetoric of luck—if everything is a coincidence, it won’t matter how many times you try. Given that this person regularly turns their conviction into practice, they are also the ones who regularly fail. Generally speaking, they fail at approaching life. They are the ones convinced that there’s no difference between who wins the lottery, and who wins the Oscars.

But a difference does exist, given that a film director who wins the Oscar, statistically speaking, has directed many films, moving from mediocre ones through acceptable ones to excellent ones, learning from their own mistakes and intuitions, failing repeatedly and, finally, succeeding. They received feedback upon which they could build their success. In contrast, the lottery player learns nothing from their bets: such bets are independent from one another, and there’s no way of increasing the odds the next time you will “try” not to waste your money. There’s no way of testing the quality of a lottery play.

What would Woody Allen say about all of this?

If you believe that it’s enough to fall in love, on the first try, with the girl or the boy who attends the same school you attend, and then spend your whole, peaceful existence in a quiet village, you’re playing the lottery. You may have won love and happiness, but without fully grasping their true meanings. Better to lose yourself under a rainy day in New York.