And A Late Quartet just goes through the motions. 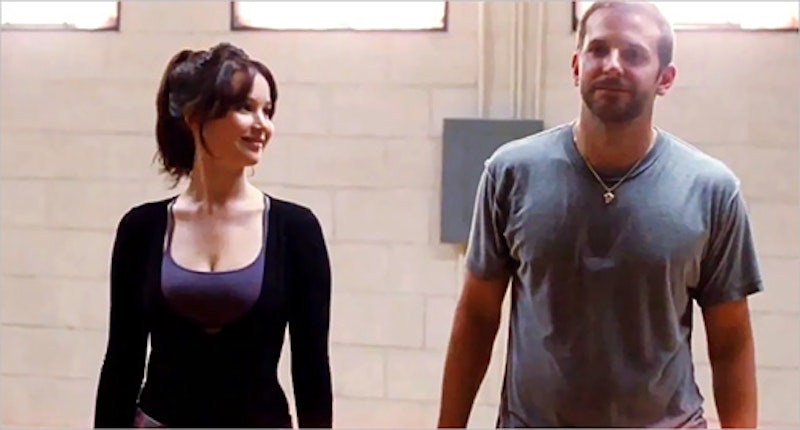 Why waste your time with Silver Linings Playbook? David O. Russell’s ninth film is his most anodyne and immediately forgettable. It’s Two-Thousand-Twelve in the Year of Our Lord and the idea of wasting nearly two hours in a movie that is this dead is maddening. Russell did right in ditching the overbearing God stuff of Matthew Quick’s novel, but Silver Linings is the most cynical and empty film of this awards season. RealDoll Bradley Cooper and RealDoll Jennifer Lawrence throw themselves into a boring, formulaic situation and transform what would otherwise be instant 7-11 Express Rack fodder into a disheartening surrender and abyssal mediocrity by talented people.

Cooper is especially irritating and he chews the scenery like an Actors Studio freshman. Mental illness—bi-polarity, mania, mood swings—are donned on the character in name only, and anyone looking to catch Cooper being anything but jumpy and over eager will get lost in the aisles. Lawrence does well with what she has of a nothing script and proves she’ll do great work soon, and she looks like a goddess. But this film isn’t just bad, it’s offensive. When talented artists elide themselves of experimentation, digression, alternative ways of telling a story, they give in and feed the beast of mass appeal mediocrity, and since a movie as oppressively bland, predictable, and annoying as Silver Linings Playbook is getting the amount of Oscar/awards buzz it has, I might have to leave the country.

No more feel-good-romantic-blunder-comedy-cry-a-laugh-a-thons. There are hundreds going on thousands of these movies readily available on videotape, DVD, Blu-ray, BitTorrent, Netflix, Redbox, or your preferred organ of choice. How to Write a Screenplay as Bible, as visible structure upon which your whole work is built. If I live another 80 years I’d be glad never to see another film where guy and girl play cocktease with each other until the last 10 minutes, after which we see them kiss and cuddle in a Christmas dinner living room scene surrounded by their equally contented, reformed, and satisfied friends and family. Casting Robert DeNiro, maybe the most disconnected and cynical avatar of Typical Old Guard Hollywood Leading Man Who Just Doesn’t Give a Shit Anymore is salt in the wound. There’s no other word for it but garbage.

A Late Quartet is another new film noticed mostly for its performances—an aging string quartet of Philip Seymour Hoffman, Catherine Keener, Christopher Walken, and Mark Ivanir feud over adultery angst, sleeping with each others’ daughters, and Walken’s progressing Parkinson’s. The contrivances—sudden disease, adultery, ill-considered sex, one last big concert—and the predictability of the whole thing prevents A Late Quartet from being anything but a small film with nice acting. Hoffman has one of his signature rage blowouts, telling his estranged wife to “sit the fuck down” before he punches out the first violinist who just told him he’s in love with Hoffman’s daughter. Keener is remarkably sad in the eyes and face, and Walken is Walken. Again, a case of talented, wealthy, probably content people participating and turning in work that is aggressively middle of the road, which is never positive.