Ignore Grimes and It's Your Loss 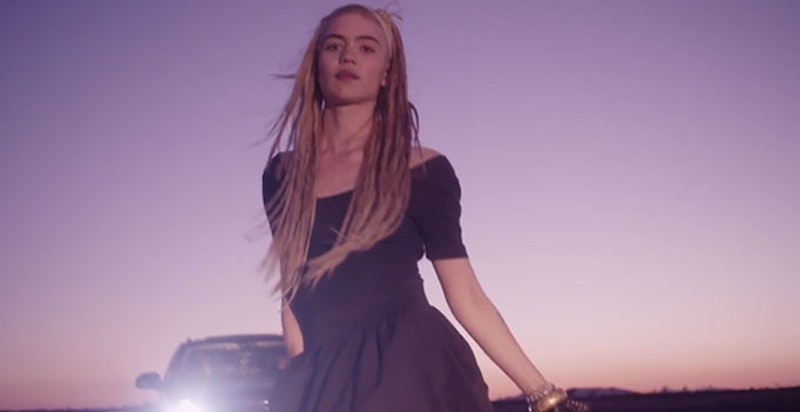 Claire Boucher caught a lot of shit for being successful this year. Her debut record for 4AD as Grimes, Visions, was not only acclaimed, but also recognized as a legit Zeitgeist moment, with thousands of young men and women in art school and on Tumblr embracing her anime-goth aesthetic and dark, moody, propulsive music. Boucher was lucky enough to come about at a time when the culture was stuck on electronic music and dance hits, but with few artists under 25 who were truly iconic and at least somewhat innovative musically. The songs on Visions were constructed in GarageBand and feature synth sounds, drum pads and patterns we’ve all likely heard a million times, but arranged carefully and sparsely and stirred with otherworldly vocals. Grimes comes out not as an anonymous imitator but as a generational figurehead.

I didn’t get around to seriously listening to Visions until last week when I picked up a cheap used copy of the LP at a local record store. I listened to the whole thing over and over the rest of the day, feeling totally hosed that I had passed it by for months. The aesthetic: angels-on-Adderall, conceptual haircuts, neo-goth, memories of Dragon Ball-Z and cruddy dubs of more obscure anime. Which, although you may only be able to gather a lot of that through the Internet ephemera surrounding this record, you can somehow feel it in its bones, how the main riff in “Oblivion” at once recalls main menu theme music, and at the same time seems to exist in this jet black void of information, the overwhelming density of abundance rendering practically everything invisible. You can count the individual parts and overdubs on “Genesis” or “Infinite <3 Without Fulfillment” with two hands, but they’re expansive and utterly deep sounding, as if every sound leads down an infinitely diminishing well of new ideas. The emetic Grimes think pieces that were impossible to avoid weren’t wrong in locating a serious generational marker here—it’s everything experienced all at once, over a lifetime, and what the future of music spawned from Internet culture might sound like.

So, like Lena Dunham and her equally successful show Girls, these women have had their wrists slapped raw for trivialities. Dunham’s an oblivious silver spooner who forgot to put any ethnic actors in her show. Boucher an oblivious party monster who culturally appropriated Muslims, Native Americans, the Japanese, and everyone else in her ”Genesis” video. This type of criticism has become more and more prevalent as pop crit evolves with the Internet: cherry pick something the piece or artist did “wrong” or inadequately to puff up one’s own status as a beacon of cultural sensitivity and acceptance. So Grimes did some “ethnic” dances and poses in her video—did these people forget how popular Cosplay and conventions like Otakon are in this country? Women have enough trouble dealing with idiots questioning everything they do and putting them down. Anyone who employs the culturally insensitive card is probably just jealous, and either unable or uninspired to do anything that’ll interest people on their own.