Arrested Development Season 4 Is a Hilarious Let Down 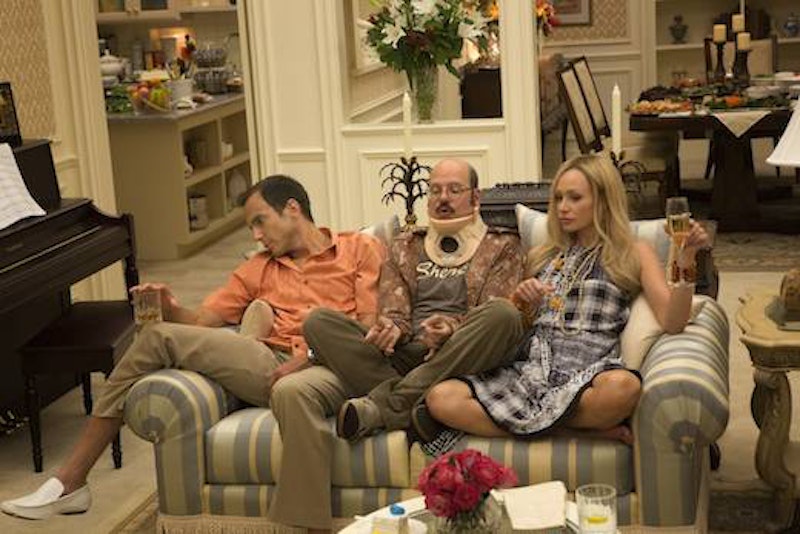 On Thursday, Forbes reported that the onslaught of negative reviews for Netflix's recently released fourth season of Arrested Development prompted a sharp dip in the company's stock. "Chalk one up for the Internet: It has killed 'Arrested Development,'" wrote Mike Hale in The New York Times, in one of the harshest reviews written over the last few days. I still have a couple episodes left so I can't give a proper season round-up just yet (though I'm doing better than Hale, who admitted to only watching half the season), but I'm not nearly as let down as most of these critics.

True, this is not the Arrested Development that we all know and love. Seven-plus years on and much of the original cast had other commitments, which forced creator Mike Hurwitz to rethink just what his show could be. What we get isn't an ensemble comedy like in the original three seasons, but rather 15 episodes devoted to individual characters. Those episodes are designed to catch us up on what's happened to the Bluth family since Lucille hijacked the Queen Mary at the end of season three. There are a few present day storylines—Michael and George Michael both dating Ron Howard's daughter, Rebel Alley, for example—which all build to a Cinco de Cuatro Celebration that the whole Bluth family ends up at by one contrivance or another, but mostly this is all about backstory.

Of course there are plenty of in-jokes and references to past seasons and the return of some beloved minor characters (Gene Parmesan, Barry Zuckerkorn). This could have been all Huritz & co. aspired to: 10 or 12 episodes of rehashed material that would provoke just enough nostalgia to be deemed a success. Instead, they were far more ambitious, with mixed results. There are certainly a few scenes that rank up there with the best stuff Arrested Development has ever done, there are also a few jokes that completely bomb and drag on and on. The two Gob episodes are perfect examples of both: most of the stuff with Ann Veal (including Gob's ridiculous wedding magic trick disaster) falls flat, while all the stuff with Tony Wonder (Ben Stiller) and "Straight Bait" was genuinely hilarious.

Still, as Hurwitz has said before, what he really wants to do is make an Arrested Development movie, so perhaps season four is best thought of as relevant backstory. Alan Sepinwall argued as much in a lengthy blogpost on Wednesday:

So it's "Arrested Development," only it isn't. And it's a new season that doesn't even tell a complete story, but rather functions as a prologue to the story Hurwitz actually wants to tell, if someone will ever give him, Ron Howard and Brian Grazer the money to do it.

Why Hurwitz, Howard and Grazer—or, hell, even just Howard on his own—don’t already have the money to make an Arrested Development movie I can't really say. Maybe Michael Cera is an A-list celebrity after all. The point is, I'll trust Sepinwall on this one, and another point he makes on his most recent Firewall and Iceberg podcast holds true as well: "If this was a series of webisodes for a new, actual season of the show that was going to exist, or for a new, actual movie that was going to definitely happen, I might view it differently…"

Certainly if that were how Hurwitz had constructed it, they could have cut a lot of the filler. I could well imagine a Tobias webisode that was only, say, 10 minutes (rather than 30), and that played a whole lot better. I'm just not particularly interested in watching 30 minutes of only Tobias, especially when those 30 minutes include way too much Ron Howard narration and references to 15 different things we already know from the last four episodes.

All of that aside, a lot of what's here is really funny and definitely worth watching. And it's just nice to have Arrested Development back on TV, even if it's not quite Arrested Development (and not quite TV, for that matter). I hope, if Hurwitz ever makes that movie of his, or if Netflix orders more episodes of the show, these 15 episodes, given a little more context, will work a little better as a season.