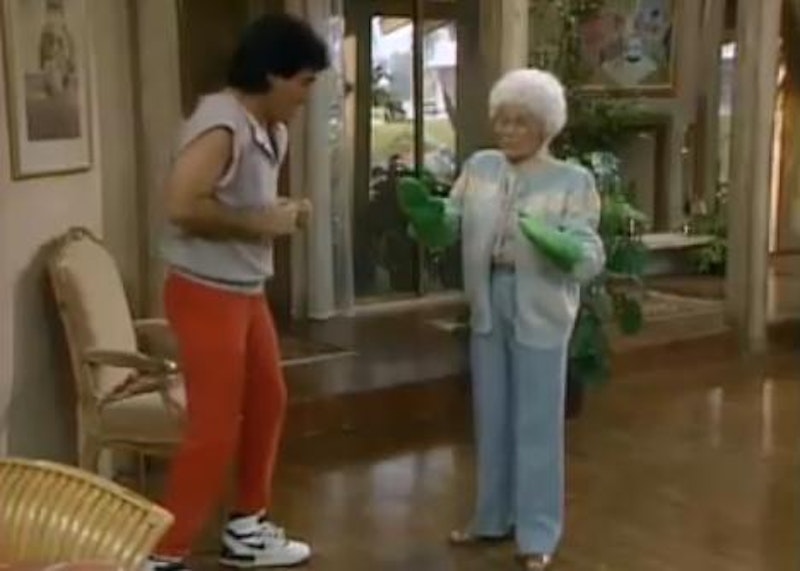 In the Season Four episode “Fiddler on the Ropes,” Sophia (Estelle Getty) blows her housemates’ accumulated savings on a Cuban prize fighter named Kid Pepe (Chick Vennera). The idea is that they’ll win their investment back plus interest regardless of whether he wins or loses. But it comes out that ol’ Pepe is an artistic type, a gifted violinist involved in boxing only to raise cash to apply to Julliard. As soon as the fight begins, a single punch takes Pepe down; at his Julliard audition, he cannot remember how to play the violin, but wins the judges over with an impassioned theatrical display. Simultaneously racist and inspirational, “Fiddler on the Ropes” concludes with Sophia murmuring darkly that given his ethnicity, Pepe was destined to spend his career “being arrested on cop shows.”

Vennera re-appears in two Season Five episodes as Enrique Mas—a flamboyant television anchor in possession of more personality force than what the legal limit allows—who becomes, interestingly, Rose’s boss. The actor’s later years, according to his IMDb page, begat heaping piles of schlock: starring roles in straight-to-video movies no-one ever heard of, voice gigs on animated series nobody remembers, one or two episode stands on shows like JAG. Also, he starred in McBain with Christopher Walken, for whatever that’s worth. And yet while this maybe isn’t the most righteous and triumphant of filmographies, the man took on a wealth of different roles, sidestepping the minority typecasting trap better than Robert Davi, say, who was to 1980s villain roles what Sean Bean was to 2000s villain roles. Given the present explosion in prime-time diversity, though, it’s safe to say that Vennera was simply born a couple decades too early to be George Lopez or Miguel Ferrer.

Maybe it’s not too late; check out the gravitas on this guy: