On NBC’s The Firm. 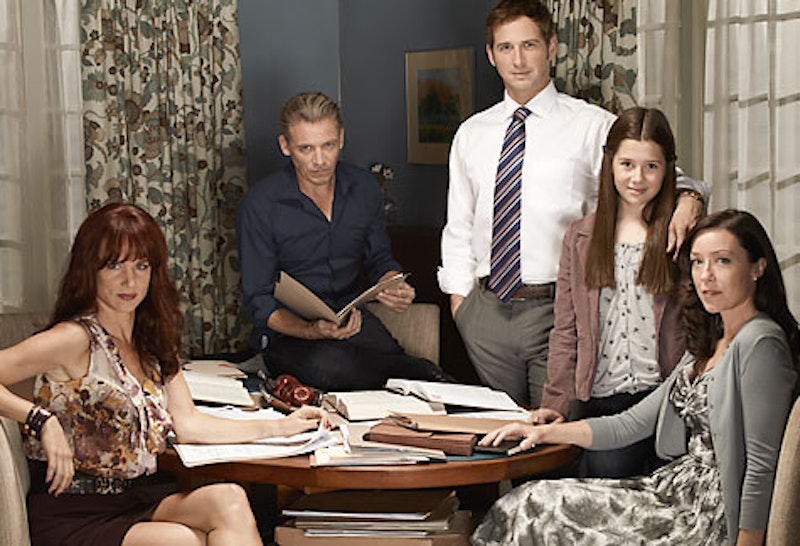 As the ninth episode of The Firm opens, Mitch McDeere (Josh Lucas) and Ray McDeere (Callum Keith Rennie) depart a sports arena and step into the backseat of a black sedan, talking all the while. As the sedan pulls away, we see a figure in a driver’s outfit sprawled on the asphalt.

The subterfuge and intrigue on The Firm (NBC) are at such stratospheric levels that every other scene comes infused with a heightened dramatic tension. This is the sort of thing that happens when the family at the center of a television show is marked for death or disappearance by any number of entities, when allies established in the early going seem increasingly less trustworthy.

The John Grisham novel and Sydney Pollack film that kick-started this enterprise laid out the bare-bones: Mitch McDeere joins a powerful Southern law firm, discovers it has serious organized-crime connections, goes on the run, whistle-blows to the Feds, then vanishes into production custody for a decade. A decade later, the McDeeres settle in Washington, D.C. and blow protective custody off—which is never a good idea—while allowing their small legal-aid clinic to be absorbed into a mammoth, diabolical firm where Mitch’s friend Andrew (Shaun Majumder) is an employee.

The Firm is a lot of things at once—The Office, blue-collar White Collar, irreverent pre-nuptial sitcom, conspiratorial 70s legal thriller, legal procedural, The Sopranos—but it switches gears with an almost unconscious ease. There’s a cognitive dissonance at play between the various slivers of plot that keeps the tyrannical realities overshadowing every covert operation, every jailhouse interview, every throbbing cellphone yanked from a hip, every jocular bit of banter about the ease with which one might acquire incriminating data files. Mitch, Ray, Abby (Molly Parker), and Tammy (Juliette Lewis) solve a new case each week—crazy baby mama drama, pharmaceutical insider baseball replete with MacGuffin, burglar brothers selling one another out—but the specter of their parent firm, the hall-of-mirror case whose explosive nature impelled their parent form to acquire them, and the mafia chieftain planning retribution lurk uncomfortably in the background. Then there’s U.S. Marshall Louis Coleman (Paulino Nunes), Mitch’s FBI handler, spurned and bitter in the wake of his former charge’s exit from the program; something’s going to happen there, it’s just hard to say what or when.

It’s been great fun to watch Lucas freed from rom-com purgatory, involved in something people are going to care about for longer than a holiday weekend, hooded eyes darting back and forth, panicked, when he isn’t on the run from thugs packing heat or charming a jury. Rennie slips into Ray McDeere’s grizzled ex-con persona like a glove, nudging crucial information from vital contacts without making it seem like coercion. Rennie’s and Lewis’ “I love you but marriage is an open question” repartee should be more wearying than it is, probably helped by Lewis’ open, comic-relief parody of the archetypally ditzy office manager. The family that discusses legal strategy over dinner and red wine stays together, it seems.

Suicides, hidden bugs, arrests, untraceable codes scrawled on a brochure, sinister bargains, dudes breaking into your house at three a.m.: these parts add up to a pretty fascinating whole, even if you sometimes come away with the sense that the McDeeres should be way, way more concerned about their personal safety. For all the threats and potential threats they face—augmented, of course, by an aggressive score, a liberal use of light filters, and angled camera shots—it always feels like new ones lurk around the corner. In the case of that firm-supplied car Ray and Mitch got into, it turns out that the car was commandeered by a soldier who wanted Mitch’s office to help him locate his son; the real driver was just lightly stunned. But what if it wasn’t?