Beyond the Limits of Alec Baldwin Overexposure

A recent Capitol One ad tips the scale. 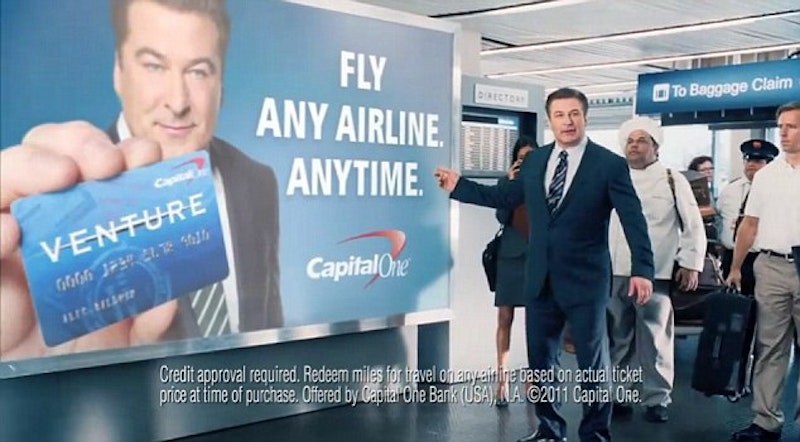 There was a time, years ago, when a little Alec Baldwin didn’t seem like too much Alec Baldwin, when Alec Baldwin would show up on television or in a film and there would not be the inclination to smash the set or flee the den, or any of the common reactions to Alec Baldwin’s non-corporeal presence via satellite feed. Here are some warm, fuzzy Alec Baldwin memories: Alec Baldwin as an exacting French teacher on an old episode of Saturday Night Live, Alec Baldwin hamming it up as Matt Damon’s mentor (a parody of an Irish FBI supervisor in Boston) in The Departed, Alec Baldwin going toe to toe with Sir Anthony Hopkins in The Edge, Alec Baldwin showing up on Friends as a sort of overly referent super-fan stand-in and ultra-positive idiot savant.

Of course, these memories pre-date the doughy, smug, self-aware Alec Baldwin of recent vintage, of 30 Rock and Hulu and Capitol One and incessant SNL re-hosting—the Alec Baldwin whose very ubiquity seems implacable even when he isn’t around. It isn’t even an arrogance, what Alec Baldwin brings to the table, it’s something beyond that, something slimier and emptier—something almost Chevy Chase, as if Alec Baldwin is simultaneously acknowledging and celebrating his own ludicrousness, but then at the same time he appears to be so detached from all of this that it’s like there’s no Alec Baldwin, there.

All of which makes Alec Baldwin a perfect spokesman for Capitol One specifically and for unrepentant, late-model capitalism and its various factorums generally. In the latest Capitol One commercial, Alec Baldwin holds court with Capitol One’s prodigal stooges—a horde of barbarians plucked from the distant past and deposited unceremoniously in the modern world—on some half-hearted Braveheart bullshit. The original gag with the barbarians, if memory serves, was that they were representative of high percentage rates and vicious late fees, and that by whipping out a Capitol One card one might sidestep all that.

So in some sense, we’ve come full circle, haven’t we: credit apocalypse harriers kicking it with their genial, soulless Undercover Boss in the name of perpetual, equal-opportunity debt. Worse, it isn’t even vaguely amusing or memorable; the opportunity for some lukewarm class-warfare jokes presented itself, but whoever was storyboarding this thing opted to punt. At least with Geico, FreeCreditReport.com, Old Navy, and Volkswagen, one could argue for the existence of a “golden age” of self-aware, noisome advertisements. But ultimately this commercial simply underlines the sustained, dependable awfulness of Capitol One ads—and suggests that things are only likely to get worse.