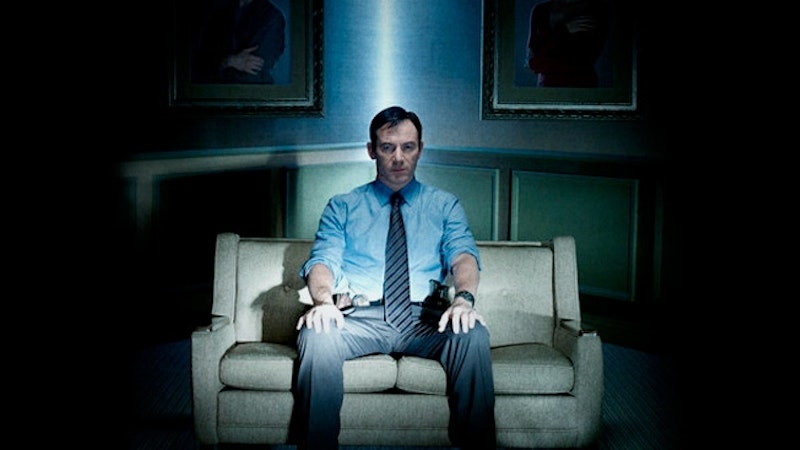 •    Each time Laura Allen smiles that insincere, curled-lip smile of hers, drink.

•    Whenever Steve Harris’ jaw begins to work and his eyes begin to blink—signs that he’s perpetually exasperated by his damaged-goods partner’s tendency to pull clues of out thin air and is on the verge of voicing this frustration—drink.

•    Whenever Dylan Minnette or Laura Innes graces a scene, stiff and humorless, drink.

•    Every time Cherry Jones appears onscreen—all warmth and good will, leaning forward expectantly or sitting back with hands crossed—pretty much making you wish there was some sort of special program whereby Cherry Jones could adopt you or at least become some sort of honorary grandmother figure, drink.

•    At the moment where some eerie parallel between the two realities is thrown into start relief—you know, those similarities that result in Jason Isaacs using information from one reality and using it to solve an unrelated crime in another, the per-episode “eureka” moment, if you like—finish your current drink, open another, and polish that one off too.

•    At any point where you get all beat up over the nocturnal logistics of Awake—like the big questions, such as whether or not if Isaacs is living in the Red reality and it’s March 19 then he goes to sleep, will it also be March 19 when we wakes up in the Green reality, like how does that work, and does it seem to Isaacs that in each reality he’s able to treat the opposing reality like an especially vivid dream for the sake of sanity and because, well, when he wakes up, is he rested or wiped out because he didn’t really sleep—go rob a liquor store.

•    Each time Jones or Wong, in therapy with Isaacs, advances the idea that somehow both realities are equally viable, valid, and justified, take the drink of someone nearby who’s on the fringes of this game and down the whole thing.