Liam Neeson neck-chops an astounding number of slimy Albanians in this revenge movie for the suburban-dad set. (Grade: B-) 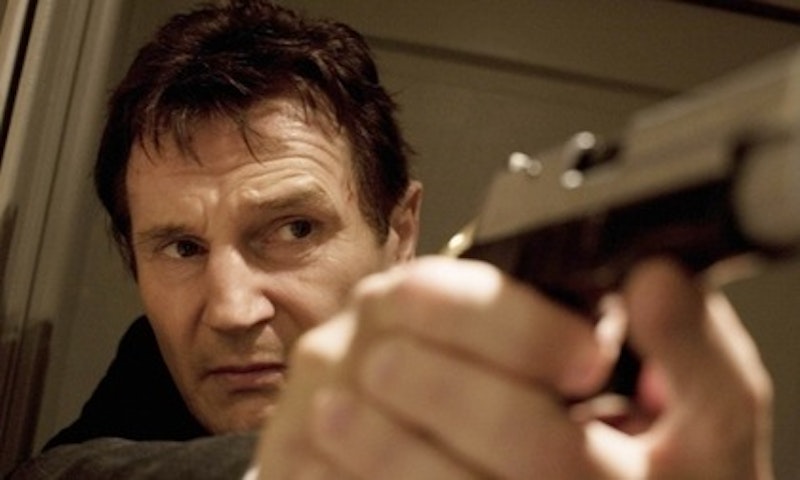 Behold wide-shouldered Liam Neeson, his craggily handsome visage still looking like it was carved out of stone during the Victorian era, tearing through Paris using every conceivable method—costumes, old professional connections, a translator, electrocution, digital camera technology, guns, knives, a fire extinguisher—to rescue his daughter from a villainous collective of Albanian flesh-traders. There’s a certain pleasure in watching Neeson’s gravitas be put to the service of the script’s more Bronsonesque moments (“I’ll tear down the Eiffel Tower if I have to!”; “It was all personal to me!”), or in watching his epic frame hide behind a monochromatic Hawaiian shirt while grilling in his backyard with some buddies. When it's good, Taken is B-movie material with top-notch talent on both sides of the camera; as directed by Luc Besson collaborator Pierre Morel (and written and produced by Besson himself), the film’s action sequences are legitimately tense and well choreographed. Whenever it slows down, however, it’s a rote and occasionally distressing revenge drama. By the time Bryan Mills (Neeson) shoots the innocent wife of an enemy while their children are in the next room, you start to confuse the hero with his sadistic villainous counterparts; Taken likewise starts to feel like Righteous Kill for family men with college-aged daughters.

Granted, this is an important distinction. The De Niro/Pacino debacle wasn’t in service of anything beyond the characters’ own bogus macho self-righteousness, whereas Taken’s murderous vigilante is a protective parent and a man who acts out samurai-like duty. His way with firearms and knives are not played for titillation; they are, as he claims stoically, “a set of skills.” Mills is an ex-CIA agent who leaves the game to live near his 17-year-old daughter Kim (Maggie Grace) in Los Angeles. His ex-wife Lenore (Famke Janssen) has remarried a wealthy businessman with dubious overseas ties (Xander Berkley), and the two of them are willing to let Kim go on a summer trip to Paris with a friend. Mills is skeptical, and not without reason; it’s revealed that the girls actually intend to follow U2 around Europe, and that they aren’t staying with older cousins as promised. And then, right as they land, a kidnapping scenario ensues while Kim’s on the phone with her dad, and Mills is forced to trade the barbecue tongs for a high-collared leather trenchcoat and a briefcase of high-tech audio equipment. Imagine The Incredibles by way of Die Hard.

The film’s treatment of human trafficking is suitably horrifying without unnecessary exploitation, although it’s too generous to say that Taken actually has anything to say about this global problem in the way that, say, Let the Right One In explored cycles of child abuse. The issue instead frames the story in the same way that corporate misdeeds (and faux-documentary depictions thereof) surround the action in Blood Diamond or The Constant Gardener, without either of those films’ pretentious moralizing. Morel and Besson may want to alert their audience to the lurking dangers of a despicable practice, but not to the point where a message distracts you from the fighting.

And my god, the fighting. I don’t have the statistics on hand, but surely Taken must rank with the top five body-count-to-running-time ratios ever. At different points, Mills dispatches with the entire male staff of a construction-site-based brothel, the bodyguards on a sheik’s private boat, and a houseful of seedy Albanians. He rigs up a makeshift electric chair to get some answers out of the sole survivor of the house raid. He finds himself tied by the hands to a basement pipe, surrounded by men who are instructed to kill him, and emerges minutes later with a pile of bodies in his wake. And this isn’t counting the presumably dozens of traffic-related deaths that must surely occur as he speeds various sports cars through Paris. These sequences are all done extremely well, without much of the ADD editing style of the Bourne movies and their many clones. Throughout, Neeson plays Mills without the slightest whiff of ham; he is a man compelled by professional and paternal duty, and however aesthetically rewarding the action may be, we never get the feeling that Mills’ behavior is fun or easy. The vengeful scenes feel emotionally realistic, to the degree that a movie like Taken can feel realistic at all.

The non-action scenes, however, abound with flat caricatures and stale drama. Kim and her friend are giggling parodies of teenage girls, while Lenore is cartoonishly spiteful and materialistic. Similarly, Mills’ 96-hour window to save his daughter is somehow flush with useful equipment—an I.V. and accompanying medicine there, a surprisingly advanced public photo-development kiosk there. Naturally these kinds of just-so plot developments and the occasional catchphrase are to be expected in a genre piece like this, but it’s still disappointing to watch as Taken rolls out great action sequences and impressive depictions of a major social issue, then deflates with a line like “Tell me or I’ll leave the electric on until they turn it off for lack of payment on the bill!” Surely a main character with such attention to craft deserves a little better, oui?