The Repulsive Pleasures of Intervention

The A&E series shines a grim light on addiction, but it gets the psychology wrong. 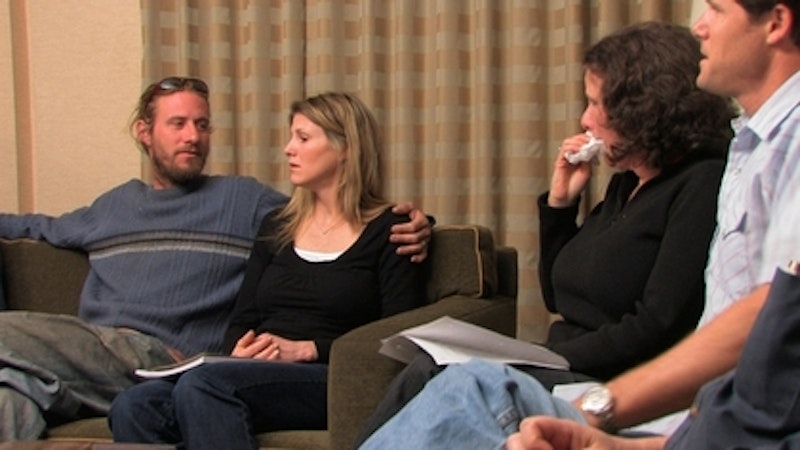 Nicole is a slight blonde woman with a suppurating plug of flesh and plastic in her abdomen. She eats by forcing liquid through a tube that enters this mechanical dock and proceeds directly to her stomach. The camera captures her at a family picnic, waving and calling to her niece while she holds a huge syringe filled with lukewarm coffee, connected to a grimy plastic tube that disappears under her shirt. Next to her a relative placidly eats a hamburger while a child sits in her lap.

Nicole is perhaps the most grotesque participant in A&E’s remarkable show Intervention, but not by far, and her story is distressingly typical. In her childhood a neighbor molested Nicole and she turned that trauma against her own body, refusing to eat or swallow anything, by turns becoming addicted to painkillers, and eventually retreating to her bedroom where she drowsed and watched TV while her children asked her to make them breakfast. Nicole’s intervention did not succeed and she retained the plug but lost all contact with her family.

Intervention, which follows addicts through the dark days preceeding their intervention, is excellent documentary television, and its producers blend gross sensationalism (shots of heroin addicts shooting up, bulimics puking, still-pretty young drug addicts blithely courting johns on the streets) with family pathos and a relatively light touch of self-help psychobabble. Most of the time the show succeeds in providing a balanced portrait of the addicts and their families—generally everyone ends up looking pretty bad. The producers do not make saints of their junkies, nor villains of the family members who, in most cases, let their children or spouses slip from their fingers into a demimonde of back-alley deals and suffocating danger.

Each episode of Intervention introduces someone, usually a drug addict, but they have touched on gambling addicts, plenty of alcoholics, and some more outré cases like Nicole. After a brief gloss of the addict’s current, dire situation the program dips into a family history, which almost invariably includes a trauma (abuse, death, divorce). Usually this is the most interesting part of the show. Most of them experienced something in their childhood which even the least sympathetic viewer would call horrific, and most of them have never moved past these horrific events, constantly re-experiencing their childhood horrors and consequently retreating into drugs, or alcohol, or throwing up everything they eat.

One of the show’s strengths is that it shows the boring and constant self-obsession that an overwhelming addiction requires. The addicts of Intervention pursue their drugs with the monomaniacal zeal that Americans are supposed to turn to their jobs. They focus on getting more drugs, minimizing distraction, and taking the drugs as often and as pleasurably as possible. The show makes these pleasures seem slight (which they may not be) and fleeting (which they definitely are). The addicts grimace and contort themselves through pain and humiliation and they outrage they bodies casually and brutally and then they spend a few seconds grinning foolishly into the camera before their high dissipates and they return to the quest for more drugs. Intervention lacks a specific editorial voice, but it’s clear that the producers wish their viewers to see drug addiction as an essentially selfish activity, a choice that isolates the addict from the world in a way that is never ennobling and only deserving of sympathy in the context of horrific trauma.

This is the one part of the show that I find ethically and intellectually troubling. The basic, fundamental stance of Intervention is that drug addiction is a perverted and useless activity that destroys its victim and must be beaten. The show, and the very instrumental, recovery-focused medical apparatus on which the interventions rely, construct drug addiction as a pathology, a disease that disrupts the ideal and normal function of the body and the self and that can (and must) be cured.

This makes sense socially, since the addict, once cured, can return to work, and to ostensibly meaningful relationships with family and friends. It makes sense medically, since the drugs or their attendant lifestyles inarguably harm the addicts. And it makes sense, at least partially, from the point of view of psychology—almost invariably the addict uses drugs as a means of coping with a trauma, so in a way a successful intervention means dealing with the original trauma and returning mental and emotional function to normal.

This is all built on the assumption that deriving joy from drugs is an illegitimate choice that disturbs a natural social and biological order. But what if we don’t begin from that assumption? The French psychoanalyst Charles Melman wrote a very interesting essay called “Addiction” (published in The Letter in 1999) that removes some of the conventional stigma associated with addiction and offers a new way of understanding drug addicts. Melman begins with Jacques Lacan’s theory of a fundamental lack of feeling, of something missing that drives our desires. We seek to fill this void with various people and objects for our entire lives—this is why we keep moving from desire to desire and don’t just drop dead on the spot. Melman’s argument awards addicts a more direct and immediate link with the object of desire than supposedly healthy people. We buy a car, or get promoted, or publish moderately interesting articles in online magazines and we get a little twinge of joy from something that is outside the self, and then we move on to wanting something else. The drug addict gets his drug and experiences from a direct contact with something that fills the original lack and is perfect, and the drug addict only needs to go get more of the drug to experience this again.

I thought of Melman as I watched a particularly exciting episode of Intervention in which a beautiful young meth addict named Christy paraded around naked, manipulated her family with cold deftness, and drank quarts of vodka. At her intervention she laughed at her family as they held back tears. She told them, and I’m paraphrasing, that she felt sorry for them because she was just having a great time and didn’t understand why they were so committed to ruining her fun. Intervention operates from the assumption that drug addicts wish to be freed from their addictions, that in their deepest hearts they don’t really like drugs, and that a life spent in pursuit of a substance is wasted. Most of the interventions on the show fail.