Catching Up: Let the Right One In and Gran Torino

An extraordinary vampire movie from Sweden puts forth its social message with style and (relative) subtlety that Clint Eastwood could only dream of. (Grades: A, C) 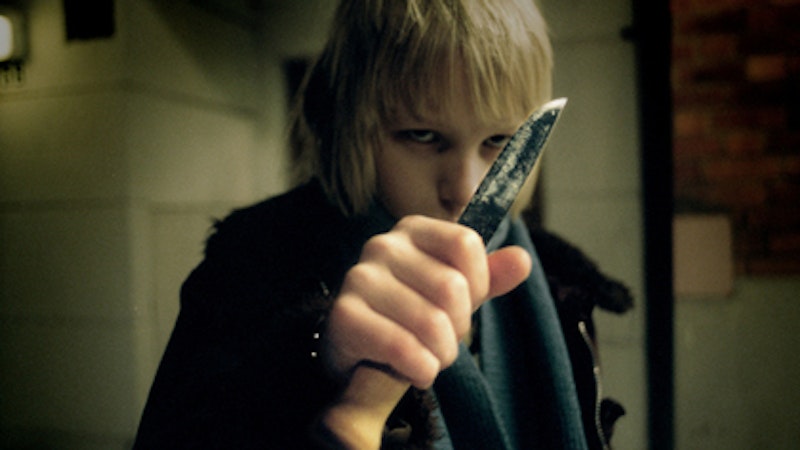 My sort-of Best Of 2008 feature has already come and gone, but the truth is that, due to the movie industry’s temporal shiftiness, I missed a couple of talked-about ones this year. So I’ll take a few columns to double back and familiarize myself with films that were either withheld from me as a non-N.Y. or L.A. writer (like Gran Torino), or ones that I just never got around to seeing for one reason or another. (Believe it or not, I never saw Iron Man or Wall-E.)

Had, for instance, I seen the Swedish vampire movie Let the Right One In prior to my year-end feature, it would have been a lock for both my favorites list and my “Biggest Pleasant Surprise” nod. As directed by Tomas Alfredson and written by John Ajvide Lindqvist (who adapted his own novel), Let the Right One In is that rare movie that transcends its pulp genre without ever feeling pretentious. In a snow-covered apartment block outside Stockholm, teenage Oskar (Kåre Hedebrant) contends with horrific school bullying and routine parental neglect. Desperate for any true human contact, he befriends his similarly abused-looking neighbor, Eli (Lina Leandersson), who if anything looks even more gaunt and desensitized than him.

Let the Right One In is most certainly a horror movie—there are a number of scenes that exist purely for chills, as well as some serious gore included purely for shock value—but it also contains, in the domestic and schoolyard moments with Oskar, some of the most insightful and wrenching depictions of adolescent suffering I’ve ever seen. Our sympathy with this antisocial and frightening child couldn’t be greater, as Alfredson and Lindqvist depict his daily life with unflinching honesty. Likewise, the bullies who torment him and the alcoholic father who perennially ignores him are presented as actual flawed human beings, not the evil-incarnate villains they could have been.

Oskar’s budding friendship with Eli therefore makes sense and never feels overdone. The young girl—no surprise here—is a vampire, but like the protagonist of Werner Herzog’s Nosferatu, she’s presented as equal parts victim and predator. In Herzog’s film, Klaus Kinski lurks and haunts like a junkie, his hunger for blood more an albatross than a thrill. Eli has similarly adapted to contemporary existence—in this case, a perfectly photographed apartment complex and its courtyard—mainly by enlisting the help of non-vampires to help her harvest blood and keep a low profile. We eventually come to appreciate the filmmakers’ true concerns; they see the immortal, unseen vampire presence in a small community as a metaphor for cycles of child abuse in same. It’s not a new use of the horror genre—Stephen King brilliantly explored similar territory decades ago in It. But Let the Right One In is taut and aesthetically sleek whereas King’s novel is digressive and sprawling. This film is closer to Night of the Hunter, both in its theatrical lighting and nimble plotting.

The early scenes depicting how exactly Eli’s unique existence goes on are among the movie’s most frightening and unforgettable. As cross-cut with Oskar’s story, they are also nearly wordless marvels of flawless visual storytelling. The plot of Let the Right One In is simple, but the way in which Alfredson and Lindqvist deliberately dole out key pieces of information—the depth of both Oskar’s troubles and Eli’s identity grow continually from scene to scene—is stunning. The art direction and cinematography, while occasionally lapsing into some obvious CGI tinkering, is also incredible throughout. The snowy, monochromatic apartment scenes recall the similar Polish setting in Krzysztof Kieslowski’s Decalogue, while the visually spare violent sequences and nondescript urban backgrounds are reminiscent of Michael Haneke's early films like Benny’s Game or 71 Fragments in a Chronology of Chance. Alfredson takes his place among the most technically accomplished moral filmmakers of the time, in other words.

High-art qualifiers aside, however, Let the Right One In is firmly a horror movie, and a better film for its non-ironic adherence to genre conventions. Alfredson and Lindqvist use the vampire motif to explore a societal issue, but never at the expense of the story’s genuine scariness and camp. Instead, like Kubrick’s version of The Shining, they reveal how psychologically insightful the horror genre can be when given its proper aesthetic and emotional due. It’s their social awareness that makes Let the Right One In a great film, but it’s the masterful set pieces (and extraordinary, subtle last 10 minutes) that stick in your mind.

Meanwhile, Clint Eastwood’s latest aesthetically overdone moral muddle, Gran Torino, is pure camp from the get-go, but Eastwood can never resist the urge to shove a lesson down his adoring audience’s throat. Splitting his time equally between a clichéd odd-couple comedy that’s fueled by Archie Bunker-inspired racial tirades and an underwhelming melodrama about gang violence and personal redemption, Gran Torino doesn’t know what kind of bad movie it wants to be. As the longtime Detroit native/Ford factory employee/Korea vet Walt Kowalski, Eastwood at times ably uses his carved-from-stone features for comedic purposes, but it’s the same tired joke over and over again: newly a widower, Walt’s got dozens of chips on his shoulders, particularly over the increased presence of Hmong immigrants in his neighborhood, and most of the script is a torrent of slurs (“zipper-heads” and “gooks” get the most attention). He eventually befriends his new neighbors’ children, Thao and Sue (Bee Vang and Ahney Her), and tries to defend them from the neighborhood gang. And so Walt, who’s no good as a father or grandfather, undergoes some mild personal penance for various wartime and domestic sins, with his 1972 Gran Torino gleaming in the background as an ever-present, clunky symbol of cultural unification and the romance of the past. The gang, you see, ogles the car as much as Walt.

In its purely comedic moments, Gran Torino is a refreshingly light, if stale, turn for Eastwood. There are other moments where he successfully transplants his hardboiled Dirty Harry/Man With No Name persona into a suburban setting, although this isn’t quite the same as questioning that persona, as some critics have stated. You can argue back and forth about whether Eastwood is fundamentally liberal or conservative (Christopher Orr has written beautifully on this misguided argument), but there’s no doubt that his values are old-fashioned, and not always admirably so. At no point does Walt ever begin to question, for instance, whether the styles and music of younger generations constitute the mere passing of cultural time rather than the decline of American morality. His eventual acceptance of Thao and Sue and their family is really just a realization that they’re more like him than he originally expected, not an internal struggle or realization that he’s a stodgy asshole.

Meanwhile, Gran Torino abounds with writing and narrative clichés—“Get off my lawn,” “What is it with kids these days?” “They don’t make ‘em like this any more”—that aren’t anything so brash as Eastwood’s mild image-tinkering; they’re just lazy writing. Let the Right One In lets its message seep through organically, and with equal attention paid to its genre-indebted thrills; Gran Torino is a limp comedy that’s occasionally saddled with equally bland social implications, which are then presented as true heart-wrenching wisdom. By the movie’s end, we’re asked to mourn for Walt’s passing even though his will contains one last kiss-off to his supposedly disappointing family; Eastwood also can’t resist photographing himself in a Christ pose. It’s a cinematic mess disguised as a morality dissertation, as if Eastwood doesn’t recognize that well-made, purposeful films inherently give us something to think about. Even ones about vampires.