Make Me a Supermodel Makes Me Want To Hump My TV

With Project Runway out of the picture, Bravo's similar show amps up the glam. 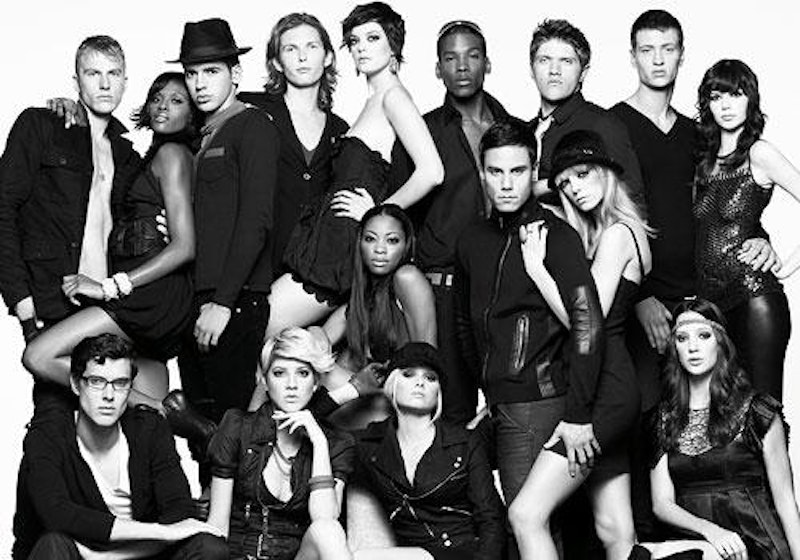 The second season of Bravo’s Make Me A Supermodel premiered last Thursday and OMFG it is a hot ass scandalous mess! You know you’re watching good teevee when all you can do is foam at the mouth about how hot Shawn is, praying to Yahweh that he could pop out of the screen for just a few minutes. That’s all you need. Forget about the plot and all that old-school 20th century stuff. The People want hot, almost naked dudes and chicks in their teevee box.

Supermodel is another installment in Bravo’s line of design-competition reality TV. Sixteen glamazons and gorgeous mans vie for a $100,000 cash prize and a modeling contract with New York Model Management. Each week the contestants are judged on an unconventional photo shoot as well as their performance on the catwalk. Tyson Beckford coaches the hot dudes, and this other model teaches the womyns. At the end of each show, the weakest/ugliest bitch gets kicked off. But they get to keep their Look Book, though. So that’s kinda nice.

If you ask me, Supermodel is the hottest show on television right now, partly because it mixes the spirit of reality competition with fashion and glamour, which everybody loves. It’s fast paced, upbeat, and the photo shoot challenges and catwalks are always really interesting. What’s so obvious, though, is that Bravo is working its tranny little ass off to make Supermodel the next Project Runway.

Haven’t you heard? Ever since Harvey “Ass-Hat” Weinstein broke his contract with Bravo and up and sold Runway to Lifetime (!), it’s unclear whether or not we will ever get to see the sixth season. Bummer, huh. Even worse than the show being on Lametime—who watches that channel, anyway?—Weinstein moved the show to...L.A. WTF? Nobody cares about L.A. The whole point of Runway is that it’s in New York, and that we are the center of the world.

Supermodel and Runway might seem formally similar, but there’s a key difference between them: drama. Drama is hot. In addition to the fabulous clothes and stuff, the first season of Supermodel zeroed-in on the clear sexual chemistry between Ronnie The Boring Gay and the HOT ex-prison guard Ben The Married Straight Who Might Do A Gay Bottom If Drunk. It seemed like the whole show was about whether or not Ben would make Ronnie bite a pillow. The best drama Runway ever produced was how many times Christian Siriano could say “fierce” in a single episode, or what a mean zebra-bitch Zulema was.

Think Bravo was pissed they lost Runway? Maybe for a hot second. But then, some executive was just “It ain’t no thang. It’s a hairflip!” and he flipped his hair and moved on to Supermodel. Cause on season two of the show, the volume is turned way up.

First of all, the dudes are ridiculously hot. Not just hot like, “oh he’s hot.” I’m talkin’ You Make Me Foam At The Mouth Hot. When I see Branden, Colin, Gabriel and Jonathan in particular, I’m just like PRAISE THE LORD! Thank goodness they’re almost always as nekid as teevee will allow. Matter fact, the next episode will be all about model nudity because they’re having their bodies painted. On the previews for the second episode, the chicks and dudes are all parading around in their skivvies. And I’m telling you there was a serious clear close-up of Gabriel’s package and I almost passed out.

As for the girls, I don’t think there’s a single one I would pick to be the next Supermodel.  Mountaha is inneresting, as is Salome. But they’re not supermodels, if you ask me. The rest of the girls are all just sort of bleh and boring. But then again, I’ve only seen one episode, and they haven’t gotten their makeovers yet. Last season I didn’t expect boring Holly to win until after she got her makeover and started fiercing out on all the challenges. I thought Jackie would win. That is, until she demonstrated how she could fart on request.

My one teensy critique I have of Supermodel, besides the fact that the girls are all duds, is that they’re going to have to cut the homophobic crap. One of the hot straight guys, Branden, is particularly homophobic; in the first episode, he had to do a romantic bedroom photo shoot with the Chris The Girly-Gay and he nearly passed a stone about it. Doesn’t Bravo know that they need to pander to us faggots? We want man-on-man aXXXion!

Make Me A Supermodel is poised to become the next reality teevee sensation, completely obscuring the boringification of Project Runway. The couture is amazing. Maybe next season, I’ll try out.

Make Me a Supermodel airs Wednesdays at 10 on Bravo.