A Career About Nothing

Steven Soderbergh's Che is exactly what we should have expected. (Grade: C-) 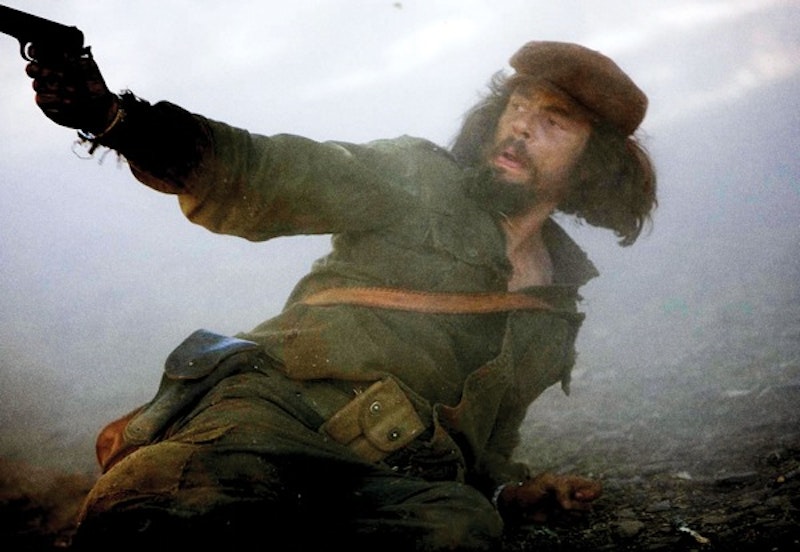 It’s been 20 years since Steven Soderbergh’s directorial debut sex, lies & videotape inaugurated his career with a critical bang, and since then he’s seemingly been on a mission to waste his talent in every way he can conceive of. His two-part, four-hour encomium to Che Guevara, out now in a roadshow edition before its eventual release as two separate films, solidifies his status as one of his era’s most technically masterful yet consistently disappointing filmmakers, and it should, were there any justness or thoughtful debate about the arts in our culture, discredit Soderbergh’s enterprise altogether. Serious moviegoers will be able to look past Che’s lush cinematography (in Part 1, at least) and recognize the vapid, hagiographic core of this bizarre cinematic exercise.

There’s no joy in criticizing Soderbergh, who in theory represents my ideal director. He started his career as the newly anointed prince of independent American film, then showed himself to be equally interested in glossy Hollywood entertainments like the Ocean’s movies and Out of Sight, awards-bait melodramas like Traffic and Erin Brokovich, and willfully uncommercial personal projects like Schizopolis, Bubble, The Good German, and Solaris. He’s also shot most of his own movies under the cinematographer alias Peter Andrews, and has shown similarly adventurous talents with the technical end of his work. There are few other “important” contemporary directors that rival Soderbergh’s willingness to take risks, his cinematic eye, or his range of interests, styles, and settings. But there are similarly few directors who have so little to say.

Sampling the different facets of Soderbergh’s work, one gets a pretty good sense of what the guy reads and what movies he enjoys, but absolutely no sense whatsoever of how he conceives of humanity. Are we a bureaucratic, hypocritical conundrum, as in Traffic? Sex-obsessed yet emotionally stunted, as in sex, lies & videotape and Schizopolis? Occasionally, fervently heroic, as in Erin Brokovich and Che? Or are people just unemotive pawns for an artist to experiment with, as in The Good German, which was shot using only 1940s-era equipment, and Bubble, which was made with digital video? Those two films are, to different degrees, indebted to the crime and film noir genres, which by appearances seem to be where Soderbergh is most comfortable. But what do they, or The Limey, The Underneath, Out of Sight, or Ocean’s Bajillion, use genre tropes for, exactly? What is it about gangsters, murderers, and spies that so enthralls Soderbergh, and what consistent worldview unifies his varied placement of them in austere character studies, domestic dramas, pop-art comedy-thrillers, and period pictures?

The Ocean’s movies, though silly, are well-made, fluffy entertainment and honest about being such. A number of great directors have imbued the light thriller genre with personality and vision, but doing so is no requirement; for me, it’s enough that Soderbergh has fun with his GQ-approved leads and his neon scenery. But in Che, the director has made a sickeningly unserious movie about a deadly serious topic, and in so doing has exposed and amplified the maddening discrepancy between his cinematographic skill and Mad Libs morality. Che is Soderbergh’s magnum opus not only because it’s equal parts Oscar bid, genre picture, and iconoclastic artistic gesture, but also because it exemplifies the blankness underneath the man’s artifice.

For many Cubans and probably an equal number of boringly rebellious liberal arts students, Che Guevara remains a hero, a symbol of belief put to revolutionary action. He was certainly the latter, although any honest appreciation of his legacy has to include Che’s confusingly violent idealism, the failures and hypocrisies of his period of political influence, and, above all, the trail of executions he left in his wake. Soderbergh ignores all three, and instead positions the successful 1958 Cuban Revolution and Che’s disastrous 1967 Bolivian campaign as equally glorious, different only in the outside circumstances (particularly the influence of nefarious, warmongering U.S. politicians) that destroyed our virtuous guerilla in the latter case. This is a Che biography that Sean Penn could have made, and it likewise makes Milk’s sanctification look like Raging Bull in comparison.

I wouldn’t feel obligated to hold Soderbergh’s feet to the fire were his technical achievements not some of boldest of his generation, and Part 1 of Che, “The Argentine,” is among the most beautiful looking movies I’ve seen in years. Shot in glorious 2.35:1 widescreen, Soderbergh’s Cuba does indeed look like a place worth fighting for (even though it’s actually Mexico); the small towns’ red clay buildings and the stunning blue sky are invigorating on such a scale, and the day-to-day struggles and experiences of the guerilla fighters are captured with loving intimacy amid the glowing green jungle. The final battle scene, when Che takes Santa Clara using political cunning as much as military firepower, is perhaps the greatest 40 minutes of pure filmmaking in the director’s career. Shot using a state-of-the-art digital camera (as opposed to the glorified home-movie grain of Bubble), the scene simultaneously immerses us in the minutiae of sniper fire and building seizure while expressing why exactly Che deserves our respect as a soldier, leader, and diplomat. The cumulative effect of this sequence is staggering; it leaves us fully aware of the man’s accomplishments (made even more astounding when we consider his asthma, which del Toro embodies perfectly) and sympathetic to Cubans’ insistence of his heroism.

This kind of one-sidedness is perfectly acceptable in a film labeled Part 1; Soderbergh and writer Peter Buchman have given themselves over two more hours to finish their story and, theoretically, imbue their protagonist with some degree of complexity. They offer no such resolution. Part 2, “Guerilla,” is inexplicably shot in 1.85:1 and with a bleaker color palette than “The Argentine,” but the view of Che therein isn’t any less gleaming. Instead, we’re shown that Guevara’s reference to a passage from War and Peace in Part 1 was all too prescient: his fighters in Bolivia don’t have the same will to revolution as his Cuban soldiers did, and if anything, the 1967 Che is doomed in Soderbergh’s telling by a lackluster group of unorganized militants who he was forced to babysit rather than teach. The idea that Che’s bizarre mix of idealism (he professed that, given equal means, all humans could attain equal happiness) and Machiavellian assuredness (he made a habit of killing people who obstructed those ideals) made his reign of influence unsustainable is never acknowledged.

The closest Soderbergh comes is in Part 1, in fact, when an American journalist (Julia Ormond, making her second appearance of the year in a ponderous would-be epic) questions Guevara’s motives in the black-and-white sequences leading up to his 1964 address to the United Nations. “It seems you can never stop being a revolutionary,” she observes, implicitly noting how political violence like the kind Che sponsored can never be simply stopped when goals are achieved, and, more importantly, how murders committed for revolution’s sake stop being noble once the revolution is achieved; once you’re in power, killing the opposition just means you’re a murderous dictator.

The only corpses on display in Che are those of Guevara’s comrades, however, at least before the hero’s own is carried through a crowd of onlookers at the end of Part 2, accompanied by a plangent, funereal score. Soderbergh also photographs Che’s execution from his own point of view, which, while visually striking (although no more than the inverse shot at the end of Kubrick’s Paths of Glory), is morally unforgivable. It’s one thing to ask us to step back and view a known murderer as human, as Walter Salles’ gorgeous 2005 film The Motorcycle Diaries did so effectively; it’s something much worse to make Che’s own death the only one we experience so viscerally. Throughout Che, Soderbergh photographs violence with admirable, humane restraint, but by firing the film’s final bullet at his audience, he asks more sympathy than any reasonably skeptical moviegoer could possibly muster.

In other words: this ain’t Danny Ocean. We’re talking about no less than the subject of the most famous photograph of all time, a man who stood for militant Marxism and who has since become best known as a t-shirt design. We’re talking about a man who murdered nearly as many people as he inspired, and whose commitment to his ideals was matched only by his intolerance for those who didn’t share them. Salles’ film pulled Guevara off the dorm room wall and reminded us that there was a human being behind the myth, a man of significant intellect and compassion. But Soderbergh’s Che is not such a man; he has no room appetites or affections, just heroic deeds. The resulting film is exactly the one we should have expected from the director, who in 20 years has exhibited a mastery of every cinematic technique except the ability to make an audience see the world anew. Che deserves better.