Mark Webber's slice-of-life film, despite its rough edges, is an engaging take on contemporary issues such as gentrification and health care. (Grade: B+) 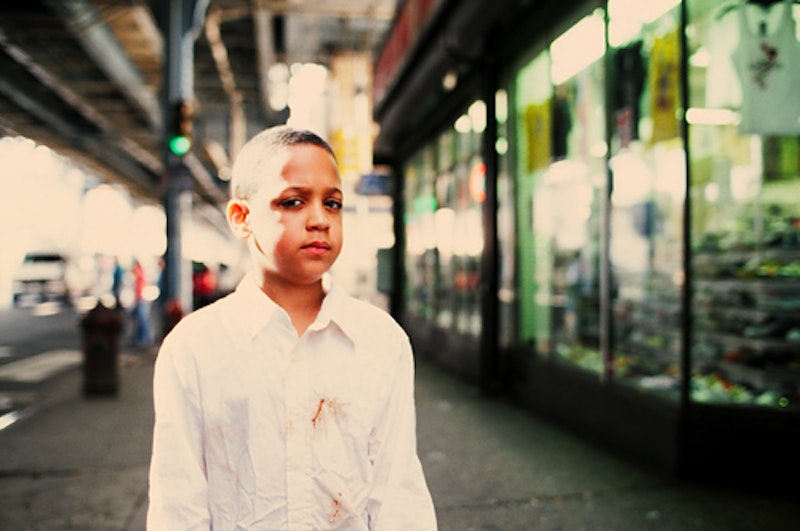 If Watchmen is any indication, it's really hard to create a film that's relevant 20 or 30 years after its source material’s release. This is especially true of films about politics. We don't like politics in art; most of us would rather have it on the side.

This is what makes debut director Mark Webber's Explicit Ills so gutsy, even more so because its topic is ripe for preachiness. A tagline of the movie could read: "A movie about a disadvantaged community's struggle for health care reform." Ick! Boring, right? No. Preachy? Only a little bit, and certainly not over the top.

The film revolves around Babo, an adorable and intelligent little boy, who doesn't have many friends but tries his hardest to be nice to everyone—he buys the school bully a new pair of $100 sneakers, the money for which he got by picking up shit for a local vendor. The film follows the struggles and hopes (with a focus on the hope) of the people in Babo's neighborhood: a young orphan we can imagine as an older Babo who tries to impress a girl who likes "smart" boys; a middle-class black family who are into yoga and health food who are trying to open a store; a young white painter and her pot dealer who do lots of drugs and party, all on daddy's dime; a young kid who wants to be a body builder; and an actor who befriends Babo.

Throughout, the film is subtle and caring with its narrative, so subtle one starts to wonder where the politics come in at all. At first, all of the "activism" is thankfully in the background, until trauma thrusts it into the foreground about midway through. Webber takes pains to avoid stereotypes. Working with great actors who don't hog the spotlight—Dano, Rosario Dawson, Lou Taylor Pucci, The Roots' Tariq Trotter—his characters come off as incredibly sincere. We care about them. This is important, because by the end, when their stories converge, the shift to politics could have been jarring and contrived if not for our connection to them.

Webber is a lucky man. Not only is Jim Jarmusch backing his first flick, but Roots collaborator Khari Mateen gives him a relevant and atmospheric soundtrack. The Roots are much-beloved in Philly, and dedicated and accessible to its citizens. So in more ways than one, Explicit Ills is a very Philadelphia-feeling film. More so than other cities, Philadelphia feels neighborhood-y. Still affordable in many places, with its small streets and low-level rowhouses, it's humble and charming, making it a believable setting for a narrative about community activism (this story would be much less believable in New York, D.C., Atlanta or L.A., but perhaps more so in Baltimore or San Francisco). Webber makes the most of Philadelphia, and the film looks gorgeous, saturated, crisp and airy.

It is not perfect. Webber has a bit of problem connecting the two (presumably) gentrifying white kids to the rest of the community. Their political involvement seems spurious and random. Webber wants to believe in cross-racial and cross-class social and political activism. He's diehard believer, it's clear. Yet while those magical things happen in real life at times, it's very hard to show on film. The process is slow and chaotic. A film as firmly ideological and intellectually simple as, say, Battleship Potemkin, perhaps the most famous "people rioting" film, is too emotionally flat for today's audiences. Given that, Webber comes far closer to complexity than I expected he would. Filming politics is a tall order, so he gets points for trying.

Will Explicit Ills be relevant 20 or 30 years from now? Hard to tell. But it is certainly on time now: How lucky for Webber that President Obama is pushing the health care issue at this very moment. From today's perspective, his passion, rooted in a concern for all people—rich and poor, black and white—feels very much on point.