Tokyo! is easily the weirdest movie in the recent trend of omnibus films. Too bad it's also the worst. (Grade: C) 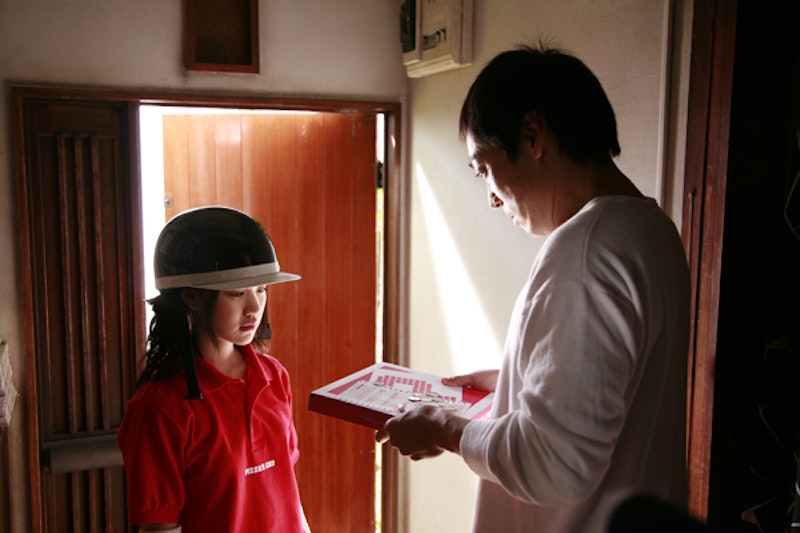 Why the sudden interest in shorts and cities? This year's Oscar-nominated short films have made over $600,000 in just about a month, which is an incredibly large amount of cash for a genre that never makes any money at all (some claim iTunes is changing that). Paris, je t'aime, meanwhile raked in a few million two years ago, and its producer is releasing a "sequel," New York, I Love You, shortly. (I can't wait.)

Tokyo!, a three-part compilation by directors Michel Gondry, Leos Carax and Bong Joon-ho, openly exploits this trend: “In the tradition of such films as New York Stories, Night on Earth, Paris Je T’Aime and its forthcoming sequel New York, I Love You, Tokyo! addresses the timeless question of whether we shape cities, or if cities shape us." Why the sudden interest in cities? Maybe it's because none of us can afford to live in them anymore.

Unlike Paris, je t'aime, which had more realistic or at least pseudo-realistic vignettes, Tokyo! is all Kafka: surrealistic and strange. Michel Gondry turns a young woman into a chair; Leos Carax creates a goblin terrorizing the city; and Bong Joon-ho imagines a man who never leaves his house. It's a mix bag—typical for short collections of this sort—that actually works as a film. Unfortunately, not all of the parts deliver the goods.

The star on this trio is Bong Joon-ho (director of The Host), whose short is quiet, controlled and perhaps the most revealing about Tokyo and urban life in general. The issue is hikikomori, a phenomenon prevalent in Japan in which people reside in their homes for weeks, months, even years. Bong's protagonist has not left his house for over a decade. Of course, modern urban life allows for this kind of phenomenon. In the city, everything can be delivered, from food to laundry, even love can be found without leaving the house—though Bong avoids this convenience (our protagonist must leave to find love). With Bong's treatment, his amber tones and carefully constructed angles, we understand why someone would want to stay inside: there is order indoors, a kind of perfection, unlike the outdoors, crazy as the weeds that envelope the hikikomori's house. Committed to staying inside, he treats his practice as much as an art as a way of life. Much like the hunger artist in Kafka's short story, the hikikomori deprives himself of something the world takes for granted: the chance to venture out into the world. His dedication to doing what we cannot makes us all the more aware of what we do instinctively.

Next is Carax's "Merde"—French for "shit"—In which the French director creates a monster for our times: a sewer-dwelling, hideous creature that initially bothers pedestrians with petty acts of theft but escalates into violent mass killing. The analogy to the modern jihadist is clear and undeniable. Once arrested, the goblin cannot be understood; we don't know why he does what he does. Only three people in the world understand his language, and none live in Japan. After a drawn out trial and tortuous (to watch) interrogations, we do find out why he kills, but it doesn't mean much. Carax is dead-on, if not a bit heavy-handed, about how a culture treats those it cannot understand and whose very existence and actions challenge it. It's not a brilliant observation, really. The tyranny of the state and its society is well documented. But Carax captures our current moment perfectly. If only he'd taken a bit more from Kafka and paced it quicker, with a touch more whimsy.

When Kafka changed his everyman into a large insect, he perfectly channeled the anxieties of modernization in the Western world. If only Gondry were as sharp. In turning a young woman—who is unspectacular, untalented, unambitious—into a chair, Gondry barely stirs a feeling from his audience. Always playful, Gondry's short is bizarre enough to please fans (of which I am one) but uninteresting in retrospect. A short film does not need to be many things: witty, insightful or well-crafted are the basic expectations. Gondry achieves none of these, though he comes very close the latter. After it was over I asked myself, "Who cares?" and quickly forgot it. A metamorphosis should signify something significantly; otherwise, why bother?

Tokyo! is worth it if you love surrealism, Japan and quirky filmmaking. If you don't, just read Kafka.