I'll have an order of the Eggs Benedict. 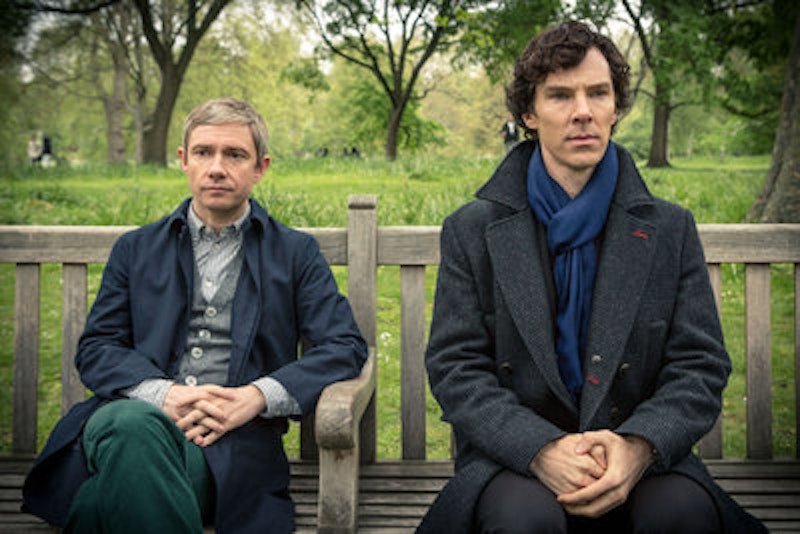 When my middle schooler was in her Doctor Who phase, she asked me to watch the nerdy sci-fi show and I refused. I bought her a “Sonic Screwdriver” for Christmas last year, even though I had to Google what it was, and a bow tie. She put up the Doctor Who poster next to her One Direction poster. I eventually watched one episode of the show and didn't like it, so I was out.

This time, the 1D poster long gone, when she started watching the show called Sherlock with her high school-aged sister, I figured she’d beg me to watch “just episode one season one!” for awhile and I'd say no and the phase would end soon enough. But one day, having run out of episodes of American Horror Story, I agreed to watch the show with her.

Isn't Benedict Cumberbatch cute, she asked me almost immediately as the show began. Well, yes he is, I agreed and was surprised to actually enjoy the episode a lot. I was quickly hooked, not because of Benedict Cumberbatch’s good looks but for several other reasons. When not distracted by the obvious, I also noticed the show happens to be very well-written. The plot is full of twists, the supporting actors are great and my favorite thing: the BBC show is damn funny.

The script drips with the kind of bitter, sneering sarcasm that only the Brits could so meticulously groom. (Alas, they themselves have hailed it as “the best TV show of 2014,” noting with typical condescension “even the Americans love it.”) Cumberbatch is flawless in the role, sporting his popped-collar wool coats and cashmere scarves (I love that he hates the hat) with flair, and continually bringing the chilly edge necessary for the role. His quote, “I’m not a psychopath, I’m a highly functioning sociopath” is not only tongue-in-cheek funny, but also quite an accurate description of his character. He plays the violin brilliantly, composing a gorgeous piece for Watson’s wedding. Throughout the seasons, he appears to have no emotion but when push comes to shove, we see signs that isn’t the case. Once again, most importantly for me as a viewer: he’s funny.

The show’s directing is also excellent. High-speed chase scenes, intricate word images that represent Sherlock’s thoughts and the well-edited scenes involving his “mind palace” (his brain seems to operate like a computer) are all sleek.

What sucks is that the new season isn’t scheduled to air until 2016! The episodes are long at almost 90 minutes apiece, which is good since there are only three in a season, but fans have to wait for the full-length Christmas special a year from now. It's annoying when you fall in love with a show and there isn’t more of it to gorge on.