Sony scraps The Interview after hacks and terrorist threats. 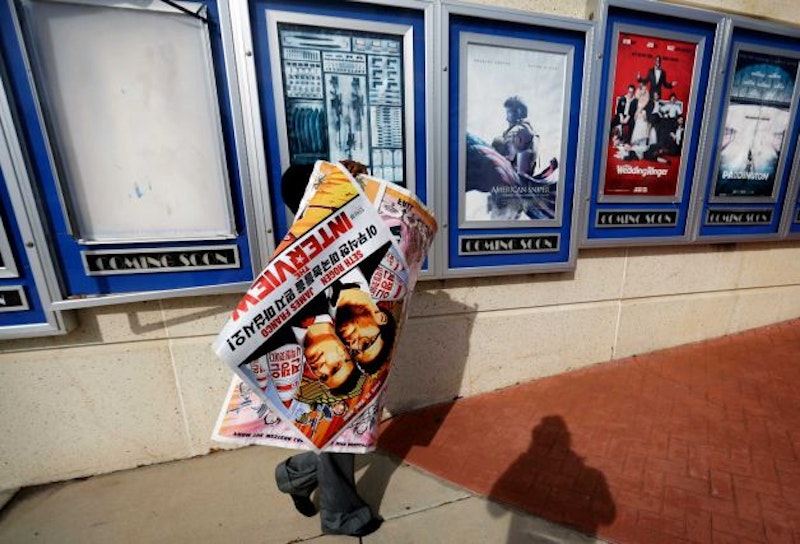 Is anyone else terrified that the Seth Rogen/James Franco movie was withdrawn from release because of North Korea? At least that’s who U.S. officials say are sponsoring the Guardians of Peace, a cyber-terrorist group that’s been dumping thousands of highly sensitive emails and internal memos from Sony Pictures Entertainment since mid-November. They possess a staggering amount of private information—100 terabytes worth (!). You might remember North Korea warning us earlier this year that if The Interview were released, we would face catastrophic terrorist attacks. Obviously no one took them seriously, because look at this picture of Pyongyang from space. North Korea is not a first world country. What’s going on here?

Whoever hacked Sony knows what they’re doing and they’ve already won. Sony Exec Amy Pascal is about to lose her job over nothing, because her private emails have become public, emails in which she does nothing wrong. The only thing she’s doing is her job—politically incorrect as some of the talk may be (doubts, slights, suspicions, and straight-up insults of people like Leonardo DiCaprio, Cameron Crowe, Ashton Kutcher, Angelina Jolie, and so on), she’s a high level Hollywood executive—what do you expect? The same frank cattiness is present in all private correspondence. Sony chief Michael Lynton is right in calling it an “unparalleled and well planned crime, carried out by an organized group.” But I have a hard time believing that North Korea is in any way responsible or even capable of such a massive breach of security. Yet that’s the word from our investigators. Rogen and Franco disappeared from the press circuit, giving their last interview for The Interview to Howard Stern on Monday, before a chilling threat in broken English kidnapper cadence was sent to Sony and every major media outlet early Tuesday, telling people to remember what happened on 9/11, and to stay away from any theater showing The Interview on Christmas. “The world will be filled with fear…” I’ll admit, even if The Interview had been released as planned, I’d be extremely nervous about seeing it at all. I’m even a bit scared of going to the movies at all on Christmas now.

So what the fuck? As an American, this is very scary and sad… on the one hand, you want the movie to come out at all costs just as a gigantic Fuck You to whoever’s responsible. Sony could release The Interview immediately for free online to prove a point, that freedom of expression cannot be suppressed… but clearly their fear of real retribution and violence is real. The hack is no joke either, and it’s not localized on Rogen and Franco. The whole company has been turned inside out. I’m reminded of the assassination of filmmaker Theo Van Gogh in 2004 and the Danish cartoon editorials depicting Mohammad published in 2005. Coercion into self-censorship is the same as outright censorship, but no one wants to die over a cartoon or a bad movie. We saw shades of this fear and reluctance when Comedy Central refused to show South Park’s animated version of Mohammad shortly after the Danish comic strips brought death threats and serious tension to people protecting the right to free speech. Now, abandoned by every major theater chain, Sony has cancelled The Interview indefinitely. Their fear must be very real.

I’m completely confused and torn on this story, because there’s just no way North Korea is responsible for such a sophisticated cyber attack. Wishful thinking? Doubt it. I still think this is an unrelated hacker group that was inspired by North Korea’s bluff regarding The Interview earlier this year, and instead of just targeting one movie; they’ve systemically crippled one of the biggest and most powerful entertainment companies in the world. Skilled freelancers working at the behest of Kim Jong-Un? How would they get paid? There’s always the possibility that this is some sort of psy-op, false flag situation by our own government, but it’s not being covered by the media in a way that suggests anything but genuine puzzlement and fear. Strangely, no one seems to care or even know the basics about what’s going on. I talked to around two dozen friends this week that either had no idea about the hack, or had nothing to say about the possibility of North Korea being more capable and sophisticated than we ever imagined (remember that rocket they launched that flew right back into the sea?) I feel it’s just as likely that The Interview’s cancelled release is a publicity stunt/performance piece masterminded by Franco, but the length and extent of the Sony leaks make this highly unlikely… I’m still figuring the whole thing out as I go along.

The situation feels farcical, like a high concept Hollywood set-up, but I have a genuine fear about what’s going to happen at movie theaters across America on Christmas Day. So the movie’s been canned—why not attack anyway? And if it’s a rogue group, there’s no telling where they’ll be or what they’ll target: am I safe seeing a matinee of The Imitation Game? Just the atmosphere of fear and uncertainty could inspire loners and copycats to shoot up multiplexes for the fuck of it—ever since the Aurora, CO movie theater shooting in 2012, I’ve kept my distance from tentpole premieres and packed event movies like The Dark Knight Rises, mostly out of disinterest in those sort of movies, but also because you just never know. And if the word is true, and North Korea has gotten as deep into Sony Pictures Entertainment as the hack suggests, then there’re a lot of other things to worry about, much bigger and more frightening than private emails and controversial comedies. Right now, I’m stalling, waiting for updates, from media outlets strangely disinterested in the story, unable to find anyone as perplexed and fascinated by the whole thing as me. It’s assuring that no one seems to be panicking, but it only takes one thing, one moment, one day, for the situation to become completely insane, with a huge death toll and physical/psychological damage never before seen. It all sounds like a bad movie preview, and I hope it stays that way.