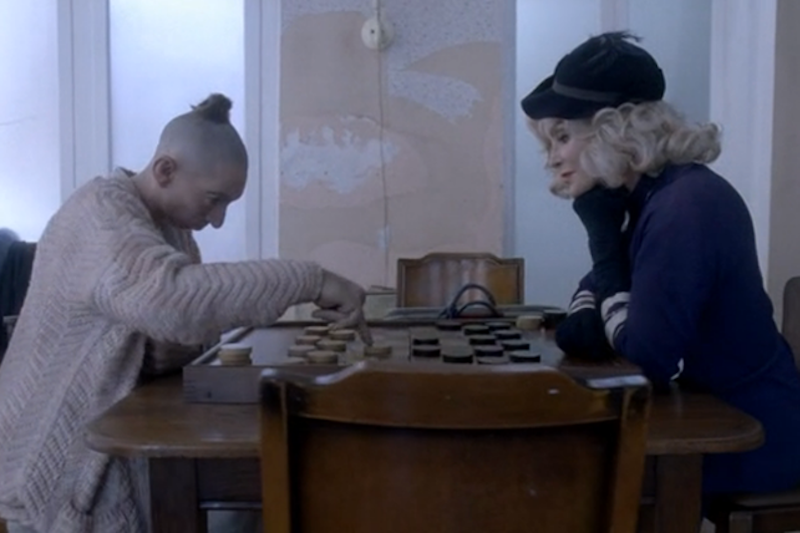 • The midseason finale opens up with an emotional monologue from Jessica Lange wherein she proclaims, “A carnie’s life burns larger and brighter than most, it is bound to extinguish at some point,” and already I’m getting teary eyed. Pepper’s soul mate, Salty, who is also a pin-head, has passed away from a stroke and she is absolutely despondent. The actress who plays Pepper, Naomi Grossman, does some impressive work throughout this episode and I wish they had paid more attention to her character throughout the season. Although her backstory is incredible, it seems completely out of left field.

• Denis O’Hare’s character responds to the tragedy by chopping off Salty’s head and selling it to a museum. Does this museum truly not ask questions as to where these bodies are coming from when it is the same man over and over delivering them?

• Desiree (Angela Bassett) has her moment in the spotlight this episode, as if Ryan Murphy was like "Wait, maybe we should stop treating every character that isn’t Dandy like a throw-away!" Dell wants Desiree back but she is like "Love you but g2g."

• Desiree and Elsa share a drink (something Ethel never got the pleasure of partaking in) when Elsa shares the backstory of Pepper. Elsa found her at an orphanage even though she was already 18 at the time. Elsa’s goal was that during the war she would collect her “pets” that would draw a crowd looking to forget their worries, but that they would stay for her. When Elsa saw that Pepper had a maternal instinct, Ma Petite came into the picture and Elsa is able to buy her for three cases of Dr. Pepper, which is adorable and wonderfully clever stuff from the AHS writing staff. Elsa eventually finds Pepper a husband and they have a beautiful wedding much like the one featured in the "Asylum" finale in season 2.

• Petition to make season 5 revolve solely around the powerful scenes between Angela Bassett and Jessica Lange.

• Esmerelda is upset that Jimmy is thrown in prison and she is unable to help, so she drinks away the pain with a ton of whiskey. When Desiree and her new beau come to her tent for a reading, her drunkenness gets the best of her and she gives an angry reading to the couple. When Desiree confronts Maggie about it, she admits to being a con-artist but lies about why she is there. She claims it is to pick the pockets of the audience, but Desiree is skeptical.

• Emma Roberts drops the nice girl act and channels her inner Madison Montgomery this episode while she is wasted and is confronted by Bette and Dot. She even goes on to call Bette a “simple-minded idiot.” As much as I love Emma Roberts it is always uncomfortable to see other people like Sarah Paulson act circles around her.

• Jimmy is visited in prison by Stanley, who claims he knows how to get Jimmy out of jail, as long as he is able to pay an attorney a retainer. When Jimmy says he has nothing to give Stanley, Stanley claims he has a way to raise the money for the attorney.

• Esmeralda finally shows Desiree that her and Stanley have been murdering all their friends in the show when she brings her straight to the museum. She discovers she is too late to help Jimmy completely when the museum shows off their new specimen: two lobster hands presumably cut off from Jimmy himself.

• In the most heartbreaking conclusion of an episode of AHS ever, Elsa leaves Pepper with her sister (the incestious mother of Kyle in season three) played by Mare Winningham. When Elsa goes to leave, she gives Pepper a kiss on the hand and says that whenever she gets sad she can hold it to her face and Elsa will be there for her.

• Pepper’s sister gives birth to a deformed baby and drinks away the pain of not having the perfect family. She is abusive to Pepper and eventually her and her husband plot to get rid of their baby and Pepper at the same time. The husband drowns and slices off his baby’s ears and then frames Pepper for it. What is with Ryan Murphy and making mothers monsters in this show? Ryan, babe, do you have mommy issues you want to talk about?

• Holy! The extremely underrated talent Lily Rabe returns to AHS (remember in season two she got possessed by the devil and slaughters everyone) as Sister Mary Eunice. She takes Pepper under her wing and insists that Pepper will be her special project. I like to think that Pepper got lots of meatloaf in Briarcliff thanks to Sister Mary Eunice. If Lily Rabe is the star of season five of AHS that is something I could get on board with. The episode ends with Pepper holding Elsa’s kiss to her face and I was in tears. Damn you, AHS writers for finally getting some emotional weight in this season as it is almost over.

• However, we now know that Elsa Mars will live through the season and will eventually make it on TV as Pepper’s last scene in the series shows her blowing a kiss to an issue of a magazine in which Elsa Mars is on the cover, “still owning Friday Night.” Although it is a relief that Jessica Lange will make it out of her last season on the show unscathed, I wonder if the rest of the cast will be as lucky.

• Ryan Murphy has stated that all the seasons of AHS are connected and this is the first glimpse the audience has had of how that may pan out.

• Dandy is missing from this episode and I actually missed him. Sure he is a total psychopathic murderer but is the most thrilling part of this season.