Anatomy of a Flop

John Carter isn't a bad film, but it's definitely a colossal failure. 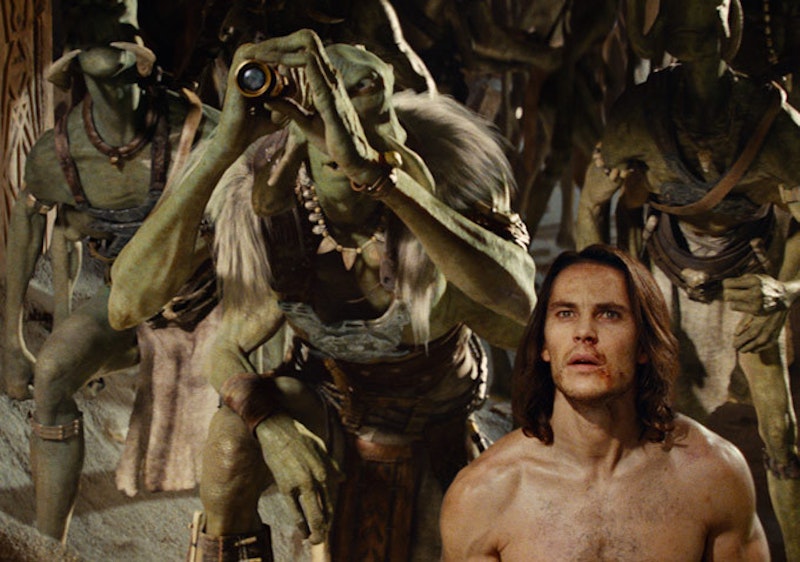 We got to the theater late, and missed the opening credits. As we took our seats Edgar Rice Burroughs was getting off a train to meet a solicitor: we settled back, as Burroughs was brought to the house of his uncle and entered a close, well-stuffed Victorian home, filled with detail and knickknacks and odd devices. This was a big-budget Hollywood movie, simply (and perhaps foolishly) called John Carter, and you could see that budget, that extravagance, those millions upon millions, in every frame.

Of course, by the time my girlfriend and I had taken our seats, the movie had already been labeled one of the most colossal failures in film history. Inconceivable losses had been spoken of; the director vilified in media reports; a bad odor attached to the whole thing. There were maybe six people sitting with us. We’d gone, knowingly and of our own free will, to watch a flop.

John Carter is not a bad movie. A movie doesn’t lose as much money as this one did just because of something as ephemeral as quality. Films that flop like John Carter fail for reasons of big business: poorly chosen ad campaigns, lack of tie-ins, badly edited trailers. None of that mattered to my girlfriend or me. We were interested because we’d read the source material; my girlfriend had been a fan since she was very young, while I’d read Burroughs’ A Princess of Mars just a few years ago, and was impressed by the breakneck pulp action, the wildness of invention, and the mad ideas tumbling one after another. The movie didn’t quite have that craziness, but it was an effective action-adventure piece with a well-structured plot and an inventive visual sense.

Watching it, you don’t feel like you’re seeing failure up on screen. Some movies have a sense of failure woven into them; humor misfires, action’s perfunctory, and you know they’ve gotten it wrong from the start. John Carter’s not like that. It’s aware of itself as an adventure on a grand scale. It’s a blockbuster, even if it’s an unsuccessful blockbuster, and sitting with a few scattered souls in a large dark room you’re startled by the craft and richness that keeps turning up on the bright screen. The film insists on its own importance. It just happens that nobody’s paying attention.

There are some things that felt jarring. There was a half-hearted attempt to work a subtext about race into the movie; that’s appropriate given the attitudes in Burroughs’ original story, where John Carter’s a former “Indian fighter” and Confederate soldier, but it felt to me like the theme dropped out halfway through, as though the movie were distracted by its own flashiness and adventure. From a storytelling perspective, the film starts slow, and builds a rich a world as it goes on—but if the slow build’s needed to set up the movie’s Mars, it’s also oddly uninvolving in itself. And while many of the small roles are well-cast, and Lynn Collins is an effective female lead, Taylor Kitsch as the title character is one of the flattest action heroes I’ve ever seen. There’s a complete lack of charisma, affect, or any sense of the “southern gentleman” Burroughs wrote about.

Still, the great machine of the movie rolls on. However aware you may be in the audience that nobody else is watching, there’s still no intimacy. It’s impersonal, like a great architectural folly or imperial monument. You watch it and think that somebody had a vision; some sort of drive. Which then was taken up, expanded and re-scaled beyond easy understanding. It has the odd energy of an old Harryhausen movie, grabbing bits of myth to cobble together set pieces into a weirdly lush tale, but has an un-Harryhausen slickness. Maybe that’s just a product of its era. You can imagine the next generation discovering the movie on Sunday-afternoon reruns, being thrilled by the weirdness of a movie they never heard of.

Like those Harryhausen films, the sex of the original has been sanded away to fit 21st century ideals (Burroughs had his characters run around nude much of the time; that wasn’t going to fly in a movie that tried in good faith to be a box-office hit). The pulpiness has been carefully refashioned and restructured. Elements from later books are brought forward, seeds for future movies that now will never happen. The level of craft sits oddly beside the density of the world, the richness even of the special effects. The source material’s been cleaned up, made presentable, formatted for our understanding, forced into plot structures we’re more familiar with.

Oddly, one of the writers who helped put the film together was Pulitzer-winner Michael Chabon. The mind boggles at trying to explain to Burroughs that a literary writer would choose to adapt 100-year-old pulp. It’d be like hearing a time-traveller tell us that a 22nd Century award-winning writer had put together an epic based on contemporary pro wrestling storylines.

That’s not to say Chabon and company did a bad job. It’s just that the failure of the movie makes it hard not to think of all their work as wasted effort. You see the build-up of a race of shape-shifting telepaths, hints that they’re planning to conquer Earth, and remember Hemingway’s six-word story: For sale, baby shoes, never worn. Something that might have been, now never will be.

There are no toy tie-ins for John Carter, possibly a function of the movie’s abandonment at the executive level that may have led to its commercial failure. There aren’t any Internet exegeses on the details of the movie, or not as many as the makers must have hoped. The serious young people who write about the influences of blockbuster movies aren’t thoughtfully comparing the themes of the movie to The Avengers or the new Batman movie or Tim Burton’s reimagining of a previous generation’s soap opera. John Carter never had the cultural moment it was aiming for, and which it might have deserved. It’s a mechanism designed to thrill and to make money. It succeeded at the first, failed at the second, less so far as I can see due to its own faults than to the marketing and distribution failures around it.

Still, sitting in a theater watching, it doesn’t much matter. The movie’s there, unarguable, a world of its own, built of money and high expectations. That those expectations—of an audience, of sequels—were not met seems merely an accident of history. Hundreds of millions of dollars builds you your own world. The movie doesn’t need an audience. It’s bigger than that. You can’t argue with it. You sit, and watch, and are entertained.