Can Serial Killers Be Funny?

Jeff attempts to humanize Jeffrey Dahmer, and the result is bizarrely humorous. 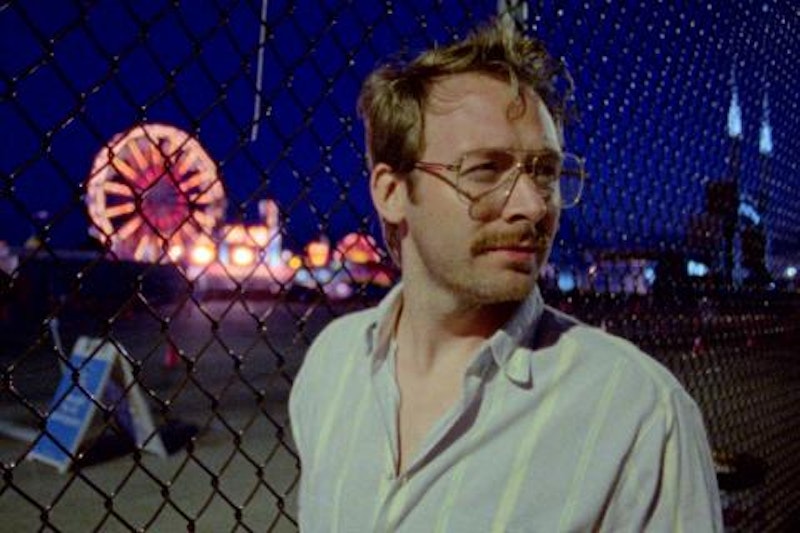 This past Saturday I snuck into a screening of Jeff at the Maryland Film Festival. “Snuck,” in the most literal sense of the word. I worked for the office this past semester, which gave me the opportunity to view any of the films during the Festival: Jeff, however, was sold out. And so, I bypassed the ticket holders and plopped down on the steps inside the Charles Theater, eagerly awaiting what I thought was a documentary on the serial killer Jeff Dahmer, because I’m sick like that. Turns out, Jeff, saw my macabre attraction and raised me.

Though the film relies upon three documentary subjects—a neighbor, a medical examiner, and Patrick Kennedy, the investigator who secured Dahmer’s confession—it also stages reenactments of the killer’s solitary life in between his sprees. Stranger still was the tone Jeff adopted. By mistake or by design, the audience was roaring with laughter up at the screen. It was like I’d taken a wrong turn into some comedy showcase. Maybe it was just nerves—what is there to do but laugh when faced with a human head in a refrigerator, surrounded by ketchup and relish, but the way in which Kennedy relates the details of the case and his interactions with Dahmer, turns the horrific actions of one lunatic into a near gag. When the police descend upon Dahmer’s Milwaukee compound, after one of his would-be victims spills his whereabouts, Kennedy remembers how they all “went in with a different attitude” after discovering a box of severed penises on the premises. Guts bust throughout the audience. “Please tell me you’re not involved with this,” Kennedy recalls his wife saying, upon viewing the case on the television. “Are you kidding? I’m the man!” he replies triumphantly.

The recreation sequences are even more unsettling in their absence of the sinister. Dahmer, played by Andrew Swant, whose resemblance to Kip Dynamite is doing nobody favors, goes to pick up toxic waste barrels—in which he will soon cram his victims’ remains—at a junkyard. The workers are puzzled when Dahmer explains that he has no car, and just plans to carry the four-foot tall barrel on foot. Giggles from the audience turn to gaggles as the next scene shows Dahmer wedging the barrel through a public bus door, and then dragging it down the aisle to a seat. His fellow passengers look at him like he’s crazy. But not for the reasons they should.

Later, after he has lured his preferred prey of a young black male to a hotel room and killed him, Swant’s Dahmer rolls an empty suitcase onto the premises. He carries it upstairs, goes inside his room, and, in real time, the camera fixed on the hallway, we await his return. He brings the now heavy suitcase down the stairs, the severed body parts clunking around inside, one step at a time. On the ground floor, he rolls it over to the concierge and nonchalantly checks out, having “enjoyed” his stay. Hilarious, right?

And what of that blue striped shirt that Dahmer wore to court, the one that was plastered across magazine covers nationwide? Well, it was Pat Kennedy’s oldest son’s shirt: “the one that my wife and I got him for Christmas. The one that he would never wear.”

All of this humor is oddly juxtaposed alongside the harrowing recollections of Pamela, Dahmer’s neighbor, and the medical examiner of the case. The doctor recalls finding pre-mortem holes drilled into the skulls of Dahmer’s victims. Upon questioning, it is learned that Dahmer tried to lobotomize these young men, turn them into his sex slaves, and was upset when they always “just ended up dying.”

Pamela’s life is ruined by the actions of her neighbor. His presence haunts her. Even after she moves, she is berated by people who claim there was something she could have done to stop his killings. On the opposite end of the spectrum, there are new neighbors willing to shell out 50 bucks to sit on her couch that Dahmer’s behind once graced, the very attraction/repulsion that had led me into the theater in the first place.

Most haunting of all, is her intrinsic connection to Dahmer. On the night he was found guilty, Pamela was in jail, serving for a lapsed ticket “or something.” She remembers hearing the verdict and breaking down in her cell, crying for poor, pathetic Dahmer. A woman went over to her and said that she was probably the only person in the world who was upset right now. Turns out, she wasn’t. Kennedy, too, remembers that night with a great deal of emotional turmoil. He had just moved out of his house, away from his wife and children, and into an apartment downtown. He was alone, it was his birthday, and at that moment, he felt the very pain that had perhaps afflicted and tormented Dahmer.

These poignant admissions are almost irreconcilable with the overarching humor of Jeff, which leads me to question the intentions behind the filmmaker, Chris James Thompson. Jeff is inventive. It is well made, navigating its forms and narratives with efficacy, and it is entertaining. But I still can’t wrap my head around this misplaced comedy. Can the loss of lives—so many lives—and the horrific psychosis of one man ever be funny? Keeping things light and abreast of the situation is one thing, but is it ever appropriate for this particular situation? Does anyone really go to a film about Jeffrey Dahmer to laugh? I know I didn’t.