(500) Days of Summer Cuts Through Cynicism

The festival hit is a charming romantic comedy that does well by the maligned genre. (Grade: A-) 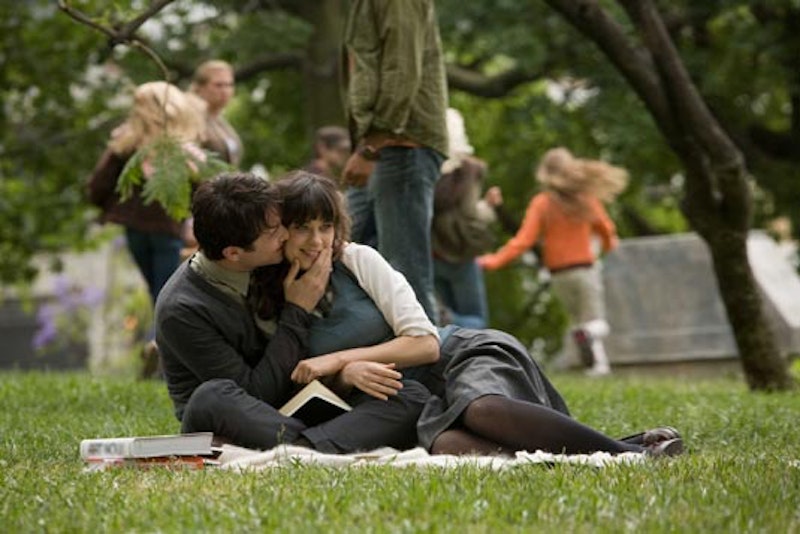 Making an original romantic comedy is like making original chocolate chip cookies. There are a lot of decent chocolate chip cookies in bakeries around the world, but not many original ones. Too few ingredients to choose from and not much wiggle room. So when a rom-com approaches perfection, a critic has to shrug off the hype and clap his hands.

(500) Days of Summer is that kind of film, much-hyped yet still deserving. Haters will say it’s too cute by half, a cheap remix of Annie Hall, When Harry Met Sally, or, with its killer soundtrack, Garden State. I won't lie; it is those things. It is the kind of movie that lends itself to this kind of review: "...it is a fairly unoriginal, quite conventional movie that is designed to specifically appeal to people who think they're very original and not at all conventional." Huh? (500) Days of Summer is so well choreographed and consciously adorable it will attract these kinds of haters. Some would even call it pretentious, with its glaring shout-outs to everything from Belle and Sebastian to The Seventh Seal.

I say shut up and just admit you enjoyed it. Let's be real: (500) is an undeniably well-written, well-edited, witty, slick, charming and stylish. You will love it. Let yourself go.

(500) follows the relationship between two people in Los Angeles. As in Alex Holdridge's In Search of Midnight Kiss, director Marc Webb's L.A. is a cozy city where people take public transport. Tom (Joseph Gordon-Levitt) is a believer in true love, while Summer (Zooey Deschanel) is a third-wave feminist of sorts who just wants to have fun. Like the recent Reprise, we experience their relationship in fast-paced pieces, jumping from the beginning, middle and end in a random order. This piecemeal, time-based approach to filmmaking encourages the comparisons to Annie Hall and When Harry Met Sally, but Tom and Summer's romance is much more casual and complicated than the ones in those movies. It's never really clear they're in a relationship, or that she likes him. We are meant to believe they have a connection because the both like The Smiths and share other obscure interests. It's the Facebook way of dating: if your profiles match up, you go out. The movie feels fresh and should resonate with anyone under 30 who has dated anyone in the past decade. The randomness of the whole process, matched by the film's grab-bag style, is spot-on.

Their relationship is so random I won't venture a summary. I will say that rising indie stars Deschanel and Gordon-Levitt mesh well. He is, as we've come to expect (The Loookout, Brick, Mysterious Skin) familiarly sullen, and she is, as we've come to expect (The Hitchhiker's Guide to the Galaxy, Yes Man) familiarly sunny and aloof. Once again, it's all very cute, but still very believable.

Some of my pet-peeve alarms did sound. The first is the focus on Tom's feelings and existential trajectory. I'm yearning for more skillful indie rom-coms like this to give equal footing—if not primary footing—to the psyche of the female lead. There are examples, of course, most notably Adrienne Shelly's Waitress and Jennifer Westfeldt's films. But the whole "I'm a twentysomething male who's in a job I hate and can't find the right woman" is so clichéd, so Two Lovers and Zach Braff, it's starting to rub me the wrong way. According to these movies, young men today are completely impotent and weak (think of the movies mentioned in this review, including In Search of Midnight Kiss, Reprise, any Braff movie, add in Judd Apatow's films) and women are abrasives bitches ((500) literally starts by calling a woman a bitch) who at first want sex and careers, only to marry someone else when they turn 30. One character in (500) calls Tom "gay" for having feelings, and later in the film Tom bites back at Summer saying: "You never wanted to be anybody's girlfriend and now your somebody's wife." Translation: die third-wave feminist bitch! It's a bit reductive.

But it gets points for sidestepping many more of my other pet peeves, including those crimes committed by the other "young indie relationships" genre, mumblecore. The characters are appropriately driven to succeed—unlike many mumblecore depictions—and well dressed. They are believable, both in how poised they are and, at the same time, how clueless they are. I saw a lot of my friends and myself in (500)'s characters.

(500) is a solid answer to what many unmarried, urban twentysomethings are asking for in their romance films. Even when it's waxing fantastical or being a bit too playful, it's still sharp and funny. I'm sure it will find an audience this summer among those who'd rather not brave the new Harry Potter movie (its competition July 17). For Annie Hall circa 2009, (500) is near flawless.