Duplicity's lukewarm box office showing doesn't have anything to do with her age. 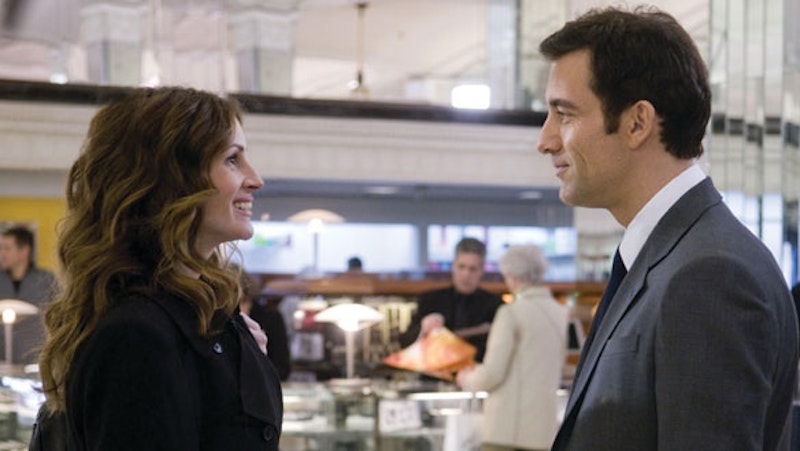 I saw Duplicity this weekend, and, like everyone else, I liked it. It's a smart and stylish corporate caper, and a great vehicle for Julia Roberts. She chose her comeback well.

But the stage is set for a Roberts pity party. Why? Because poor old Duplicity didn't debut at #1 last week—this week, its gross has dropped almost half and dropped to fifth place. Knowing and Race to Witch Mountain beat it out in the box office. Maybe, in this economic climate when going to a movie is a welcome escape, Americans probably just wanted to spend more money on flashier, more frivolous fare—special effects offer more bang for the buck. It seems critics and publications all over the Internet are intent on making Duplicity's poor showing about Roberts' age.

No doubt, Hollywood is a rough place for older women—and women in general. A cursory look at last year's top-grossing movies shows that vast majority are either children's movies or male-led. It's always been this way.

Yet Hollywood makes a lot of money from older women, as opposed to less-predictable younger ones. Meryl Streep, for instance, has been on a career high in the past few years. Both Devil Wears Prada and Mamma Mia! made obscene amounts of money, nearly $1 billion for those two movies alone. Diane Keaton (Something's Gotta Give), Helen Mirren (The Queen) and Diane Lane (Nights in Rodanthe) have had their recent successes too.

Perhaps women who are transitioning, as Roberts is, from young to old (two different markets), have the bigger problem. But that argument doesn't hold water, either. The 11th highest grossing movie of last year in the U.S. was Sex and the City: The Movie. I was shocked and delighted at how many people of all ages were eager to see a movie where every woman was over 40—at the end of the film, single Samantha turns 50. Part of the genius of Sex and the City, it's been remarked, was that it created the fantasy that women can get more beautiful and glamorous as they age. People love to see that. Without a doubt, actresses near or already 40 have had success both on the big and small screen: Jennifer Aniston, Tina Fey, Cameron Diaz, Halle Berry, Cate Blanchett, Teri Hatcher, Calista Flockhart, to name just a few.

Some argue that Roberts is simply old-fashioned, not old. Given Aniston's success, I don't see how that's a viable argument. It may simply be that Julia Roberts has changed too much or lost her relevance. All actors need to stay active to remain relevant and headline popular movies, and Roberts does look different now. Her face has grown subtly harsher, but, in my opinion, much more beautiful and sophisticated. A similar thing happened to Meg Ryan, who, presumably because of plastic surgery, became less relatable as she aged. It's one reason among many The Women didn't do well at the box office. Maybe America simply decided it doesn't like her anymore. Just look at Nicole Kidman.

Hollywood is a harsh business, audiences are fickle, and the box office is unpredictable. There are many reasons Julia Roberts may not have the draw she once had. I still think she has potential for further success, but even if she has lost it, I think age is a much less significant cause than the regular phenomenon of a celebrity suddenly losing their power in an age where stars are a dime a dozen.